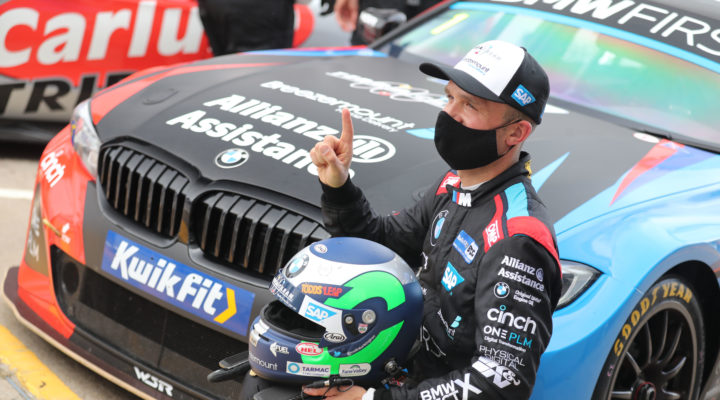 Reigning Champion Colin Turkington picked up from where he left off by taking pole position for Round 1 of the 2020 Kwik Fit British Touring Car Championship at Donington Park earlier today (1 August).

It was a ding-dong battle during the 30-minute session as P1 swapped places several times, whilst a number of drivers endured wild rides off-track as a slight sprinkling of rain added to the drama.

The Motorbase Performance Ford Focuses of Rory Butcher and Andy Neate both had trips across the grass, whilst Nic Hamilton’s session was ended early on when the bonnet of his VW CC broke and flicked up across his windscreen.

It was Toyota man Tom Ingram who led the way after ten minutes with the Toyota Gazoo Racing UK with Ginsters Corolla looking extremely competitive as it begins its second season, but soon after it was Laser Tools Racing’s Ash Sutton who hit the front.

Team BMW star Turkington would not be denied, however, as he blasted his 3-Series around 1.98-mile track in record-breaking time. In fact, some eight drivers dipped under Jason Plato’s qualifying lap record from 2014, but it was Turkington who became the first driver to circle the Donington Park National Circuit inside the 1:08s bracket – scoring his 21st BTCC career pole position in the process.

The ultra-competitive session was further highlighted as Halfords Yuasa Racing’s Dan Cammish fell short of Turkington’s benchmark by just 0.087s – a timely reminder as to just how close the two drivers were during the 2019 season.

Sutton starred on his Laser Tools Racing debut as he hauled his Infiniti Q50 to third, whilst Ingram had to settle for fourth at the finish.

Tom Oliphant equalled his best ever qualifying result with fifth, ensuring that both manufacturer-backed BMWs will start up front tomorrow, whilst Butcher’s early flyer was still good enough for sixth.

BTC Racing may be slightly frustrated to have Josh Cook in eighth, whilst his team-mate Tom Chilton could only manage 16th despite a strong start to the day in practice. Such was the pace throughout the field that Chilton was only 0.821s off Turkington’s pole time, but now he’ll have it all to do from the eighth row on the grid.

Rounds 1, 2 and 3 of the 2020 Kwik Fit British Touring Car Championship will take place at Donington Park tomorrow (2 August) with all three races being screened live and exclusively on ITV4 from 10:35.

Colin Turkington said: “It just feels so good to be back driving in anger. We’ve almost had two pre-seasons but it’s so good to go into a full blooded qualifying session and come out on top, so big credit to Team BMW and the work we’ve been doing. I’m very proud of the team, we’ve worked extremely hard over the extended break. It has not been a break for us, we’ve kept preparing and kept trying to get better and the fact that we’ve lowered the lap time from last year, and I was on pole last year and we’ve improved on that, shows how hard we’ve been working. It’s all smiles at Team BMW today. It’s been a really good start for us so I’m looking forward to all of the action again tomorrow. I’m always worried about everybody else, you see how close the times are and it’s just about putting the lap on the table when you can, when you’ve got some track time. The guys are hot on my heels so it’s not easy by any chance and it’s going to be a scrap tomorrow.”
Dan Cammish said: “Has anyone else got a sense of déjà vu? Team Dynamics did an amazing job and again proving why they’re such a great team. To get me out there and not only that but in a car which is capable of challenging for the outright pole position. I knew I had to get on with it, we’ve all been watching the weather that last hour or so. For me, it’s been tough, there’s an old saying ‘you’re only as good as your last race’ and mine is lingering. When I got out of the car at Brands (last November) I didn’t want to see it again for quite a while. But any racing driver will tell you, we always want a break but when we get it we can’t wait to get back in it. Two weeks after I was wanting to get going again and put it behind me, but obviously with what’s happened in the world has just meant I’ve had an extended period of being reminded of what my last race was. So I’m really looking forward to this weekend, to get it started and then I’ll have three new races to look back on and last year will be history.”

Ash Sutton said: “It’s our first proper run out in the dry so the Laser Tools Infiniti Q50 has done me proud. It wasn’t quite right, we’re still tinkering, still trying to get in that window. But we’ve delivered when it matters and to be standing in P3, on the second row, inside, it’s going to be interesting. We’ve got a good race car, it’s just when you’re trying to live on that 99/100% limit, you’re just lacking those few little things from the car. The boys have worked phenomenally to deliver what we’ve got and I know it’s been hard work playing catch up when Colin and Dan have got a few seasons under their belts. It’s always hard coming in with limited tuning and they’ve done a mega job, they’ve done me proud, they gave me a car that got me where I am today and that’s what matters.”