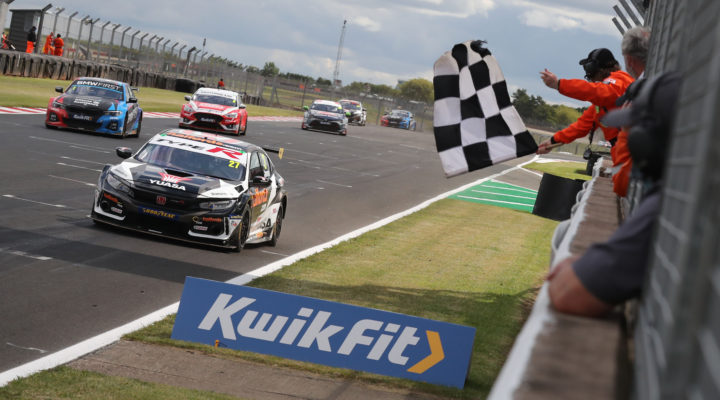 Sutton’s Inifiniti had already got by Cammish’s Honda Civic Type R into Redgate for the first time and the 2017 champion was immediately looking for the lead.

The critical moment of the contest came on lap 4 as Sutton got the switchback on Team BMW’s Turkington on the exit of the Old Hairpin. The pair touched slightly on the run up to McLeans and Cammish incredibly squeezed by both of them, whilst slight contact from Tom Ingram’s Toyota tapped Turkington’s BMW into Sutton.

Toyota Gazoo Racing UK with Ginsters’ Ingram and Halfords Yuasa Racing’s Matt Neal shuffled Tom Oliphant’s BMW down a couple of places late on to eventually finish in fourth and fifth respectively, whilst Oliphant should still be pleased with his top six result.

MB Motorsport accelerated by Blue Square’s Osborne scored a career best seventh, whilst Smiley’s result was a great return for the all-new Excelr8 Motorsport Hyundai. Team Parker Racing’s Jelley started 15th, but the experienced racer picked his way through the pack to improve by six positions during the race.

A safety car was called for on lap 11 as Senna Proctor’s Hyundai retired with a mechanical failure, whilst almost simultaneously Nic Hamilton went off into the gravel at the final corner.

Whilst the leading order remained relatively calm following the late restart, it did provide the recovering Sutton with the chance to fight back through. The young charger was fired up – improving from 22nd to 14th as the chequered flag fell – breaking the existing lap record in the process to score a valuable bonus point.

Round 2 of the Kwik Fit British Touring Car Championship will take place at 1330 will all the action being streamed live and exclusively on ITV4.

Dan Cammish said: “I knew Ash would be quite aggressive with Colin, I was banking on it. When he made his move I made mine as well and made it stick. I had a hairy moment at the old hairpin which would have been embarrassing when you’ve got that much of a gap. But I gathered it up and held on til the end.

“It was a really ballsy move for Ash to go around the outside of Colin up the hill and he made it stick, once he opened the corner up for himself I think he forgot about me! I just drove into the gap and he tried to squeeze me across and I thought ‘not today, I’m not having it!’ and hung onto it and off we go, and then chaos ensues unfortunately for Ash.”

Colin Turkington said: “You like to get the win, but the priority is to finish and score well three times this weekend. I know it’s difficult to win them all, so it’s a fantastic result for me and for Team BMW.

“I’d hoped to start the campaign easing my way into the first race, but Ash was on me by the time we got to Old Hairpin and the first three laps were very close indeed. We had a bit of contact going into McLeans and it all bunched up again at Coppice but I was fortunate to come out unscathed and still in second.
You get a point for leading and pole and any time you finish on the podium in the BTCC is an achievement. My car was very fast but we were losing time in the final chicane where the track was a bit dirty but I’m very happy with second.”
Rory Butcher said: “We wanted more from me in qualifying, I didn’t show everything I had. I was determined to go forward today and I made a place up on Tom Oliphant on the first or second lap, but the guys in front were running such a hot pace. So once I got up into third I was content and just wanted to bring it home for a result for the boys who’ve worked so hard all winter. It was a great debut for the car.”
2020 Kwik Fit British Touring Car Championship – Race 1 – Donington Park