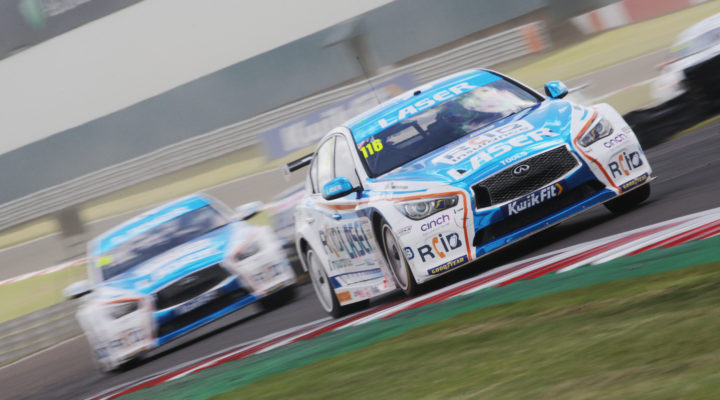 Laser Tools Racing fighting at the front as BTCC returns

Sutton was the standout driver of the event, as the 2017 champion broke a number of long-standing records as well winning an enthralling final race around the famous 1.98-mile track.

Having made the shrewd decision to run the Inifiniti Q50 for the second half of the 2019 BTCC season, Laser Tools Racing hit the ground running for the long-awaited 2020 campaign – building and preparing a fantastic racecar for the opening weekend.

Sutton was just 0.097s behind Colin Turkington’s pole position time on Saturday afternoon and would line-up third on the grid for Sunday’s curtain raiser, whilst Moffat was just over a second off the ultimate pace.

Moffat produced a really promising first race performance as he scrapped his way through the order to score the final championship point on offer, but the remainder of his afternoon was compromised by misfortune.

A grid infringement in race two brought about a ten second time penalty from the stewards, which ended his hopes for a second successive points paying finish.

The 23-year-old’s final race was spent fighting back through the pack, but with little reward for his sterling effort.

It initially looked like Sutton would also face a frustrating Sunday afternoon when another rival curtailed his enthralling race one performance.

The Essex man was attempting to take the lead from Turkington’s BMW on lap four, and looked as if he had got the job done, before he was tipped into a spin from behind.

The #116 Infiniti Q50 was sent tumbling to the back of the order but this is where Sutton’s phenomenal fight back began, as he sliced through the order to take the fastest lap of the race on his way to a 14thplace finish.

Sutton continued the trend – breaking the existing lap record as well as becoming the first BTCC driver to set fastest laps in all three races, since Gordon Shedden back in 2012.

The best was saved until last, however, as the talented racer stormed from eighth on the grid to claim his 15thBTCC career victory and the first for the incredible Laser Tools Racing Infiniti Q50.

He made a number of fantastic moves during the race with his final pass by Chris Smiley’s Hyundai clinching the victory, much to the delight of everyone at Laser Tools Racing.

Ash Sutton said: “This is just what we needed. The car gives me a hell of a lot of confidence and it’s allowing me to do these things. I’m over the moon with that. As long as we can keep this momentum going, I know I’ve got the best team behind me with Laser Tools Racing and BMR Engineering. I couldn’t ask for a better outfit. The car is absolutely phenomenal. I feel at home in it, it’s the best I’ve ever felt in a car so we’re ticking a lot of boxes here.”

Aiden Moffat said: “It didn’t turn out to be the best weekend for me personally but I am delighted for Ash and I’m extremely proud of everyone involved in Laser Tools Racing. We have all been working so hard over the last few years and the hard work developing the Infiniti Q50 over the last 12 months is really starting to pay off. I’ve won on the Brands Hatch GP circuit before and it’s a circuit that I really like, so lets hope for something similar next weekend!”