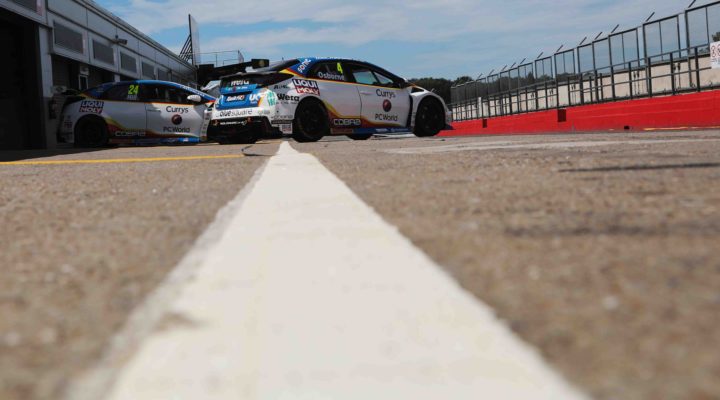 The Essex-based team headed into race day looking to build upon an encouraging performance on Saturday, with drivers Jake Hill and Sam Osborne both impressing on-track during free practice and qualifying.

Despite a minor electrical glitch, Hill showed top ten pace during the opening practice session and backed that up in qualifying to put his Honda seventh on the grid for the opening race with a time less than four tenths-of-a-second off pole – and underneath the previous qualifying lap record.

Osborne, meanwhile, produced an eye-opening performance as he ran well inside the top ten during the early stages of the session before eventually ending up 12th-fastest in the sister car, having improved his best time by a second over the course of the day.

It marked the 27-year-old’s best qualifying result by far, having never previously broken into the top 20.

The opening race would prove to be a mixed affair for the team, although things started well with Hill maintaining his position through the opening lap and Osborne moving quickly up into the top ten.

The #4 car would continue to move forwards until the two MB Motorsport Hondas were running together on-track, only for Hill to then be forced to pit on lap six with an engine problem. That promoted Osborne up into seventh place and a measured drive – despite a Safety Car that allowed the chasing pack to close in behind – saw him rewarded with his maiden top ten finish.

Hopes were high of a strong result for both drivers in race two, with the team having worked hard to change the engine in Hill’s car in order to allow him to join Osborne on the grid for the start.

Osborne was able to retain his place inside the top ten through the early stages but his race would end in disappointing fashion when an alarm sounded in the car and forced him into the pits to retire. Capping a tough race for the team, Hill was then hit with further engine issues that left him joining Osborne in retirement.

The team again pulled out all the stops to get Hill’s car back out for the final race, which became an important test to ensure that the engine issues on the #24 Honda had been resolved. Despite being forced to make two pit-stops to check the engine and replace a punctured tyre, Hill showed the pace in the car to set the second-quickest lap time, even though he would be unclassified in the results, three laps down.

Osborne would unfortunately retire after an issue with the right-rear wheel having battled his way up towards the points-scoring positions, with the team now looking forward to fighting back in the races to come.

“We had a tough weekend, but hopefully we have managed to get rid of all our bad luck at Donington Park!” said Team Principal, Shaun Hollamby. “Sam’s result in race one was an obvious highlight. We’re hugely impressed with the way in which he performed to secure his first top ten finish. It was certainly a drive that has shown people what he can do and is the reason why we wanted to bring him on-board.

“It was a difficult day for Jake, but he showed in race three that he has the pace of the front-runners and it was simply unfortunate that circumstances didn’t allow him to pick up some good results. Even though the end results aren’t what we were hoping for, there are things we can take away from Donington that will benefit us going forwards and we look forward to fighting back at the sharp end next time out.”

“Motorsport is full of highs and lows, and it is just unfortunate that we have endured a tough start on-track,” said the squad’s Sporting Director, Mark Blundell. “The potential of the team is clear to see from Sam’s hugely impressive performance in race one and the pace that both he and Jake showed in race three. We have a quick turnaround before the next event and there’ll be no stone left unturned to make sure we can get the results our pace deserves next time out. It was a long day for our team with all the work needed to get Jake out for each race, so we are really thankful to everybody involved.”

“That certainly wasn’t the start to the season we were hoping for, but there wasn’t much we could do about it,” said Hill. “It’s heartbreaking when things happen that are outside your control, but I can’t fault the MB Motorsport accelerated by Blue Square team as they pulled out all the stops to make sure I was out for all three races.

“It’s been a challenge for us as a team but these things make you stronger, and we just need to put Donington Park behind us and focus on what is to come. We showed in race three that the car is quick, and I have no doubt that we’ll come back strong.”

“It was a mega weekend for me, even though two retirements on paper might not look so good,” said Osborne. “I had my best-ever qualifying result on Saturday and to then race through to seventh in the first race was fantastic; a top ten finish first time out in the car is more than I could have hoped for.

“In both race one and race three, we showed strong speed on-track and were able to match the front-running pack. That is something that gives me a huge amount of confidence for the season ahead.”