‘ROCK-SOLID START’ TO 2020 CAMPAIGN FROM INGRAM 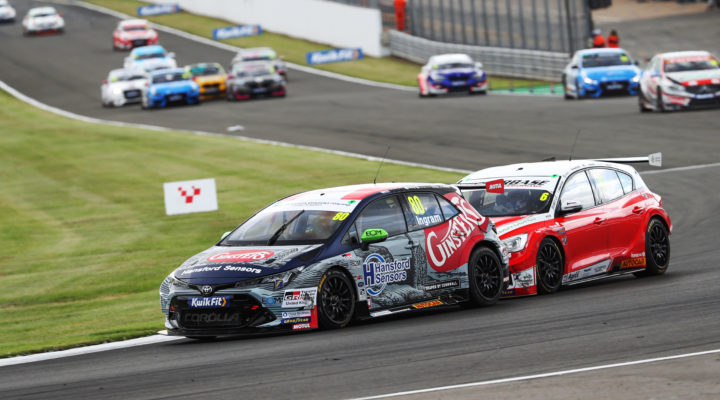 Tom Ingram outlined his title-chasing credentials with a battling performance as the Kwik British Touring Car Championship fired belatedly into life at Donington Park last weekend (1/2 August), scoring a hat-trick of top six finishes to stake his claim as a leading contender for the biggest prize in UK motorsport. The 26-year-old will now be looking to build on his strong start to the season this weekend on the Brands Hatch GP circuit.

Heading into its second campaign with the race-winning Toyota Corolla – whose maiden success in the series came at Donington last year – the Speedworks Motorsport-run Toyota Gazoo Racing UK with Ginsters outfit returned to the track for the 2020 season curtain-raiser in optimistic mood. Ingram duly put the #80 entry fourth on the grid in qualifying, barely two tenths-of-a-second adrift of pole position amongst the 26 high-calibre protagonists having for a while topped the timesheets himself.

After losing out to the fast-starting rear wheel-drive BMW of Tom Oliphant when the lights went out in race one, the Bucks-born ace wasted no time at all in redressing the balance with a bold pass up the inside at the Old Hairpin to reclaim the spot. He swiftly settled into a close five-way scrap for supremacy, until a lap four tangle saw the leaders trip over each other, causing a concertina effect in which Ingram hit the back of defending champion Colin Turkington.

Not only did the incident cost the Toyota driver two places, it also left him having to manage overheating issues for the remainder of the race – although that did not prevent him from pulling off another peach of a move on Oliphant when the action resumed following a safety car intervention on lap 11. The quickest driver on the track in the closing stages as he zeroed in on the top three, Ingram went on to take the chequered flag fourth, just two seconds away from victory.

Carrying 42kg of success ballast on-board the Corolla in race two, the two-time BTCC Independents’ Champion made short work of fighting his way past triple title-holder Matt Neal, earlier nemesis Oliphant and race one winner Dan Cammish to seal the same result again – but the partially-reversed grid format saw him begin the day’s finale from down in P9.

In front of the live ITV4 television cameras, Ingram immediately went on a charge, even saving a lurid slide after finding himself tagged from behind heading onto the start/finish straight at the end of lap six. Showcasing his sublime car control, Ingram recovered without losing any positions and proceeded to flash across the finish line less than three tenths-of-a-second shy of fifth place at Toyota Motor Manufacturing (UK)’s ‘home’ track.

“I’m really pleased with how the weekend went,” said Team Principal Christian Dick. “It was a rock-solid start to the season, which was exactly what we had been targeting, with no big dramas and good points scored in all three races. The Corolla ran well throughout and we had strong speed across the board – both with and without ballast – which bodes well for the remainder of the campaign.

“It was good to corroborate our testing results, and we have clearly taken a step forward since last year – with progress in every area. That has made the car easier to drive on the limit, and Tom performed extremely well all weekend and really fought for every result.

“The podium was certainly achievable in race one had it not been for the early skirmish ahead. That’s how it goes sometimes, but we still came away with a fourth-place finish and a good points haul. The same could be said of race two, and in race three, we were just as quick at the end as we were at the beginning, which enabled Tom to pick some of the other guys off as their pace fell away and ours remained strong. That was particularly promising.

“Moving on to Brands Hatch, the objective has to be three good, consistent points-scoring finishes again – with all eyes on the prize. Tom is within touching distance of the championship lead, yet being in fifth place means he will arrive carrying considerably less ballast, so we need to make sure we capitalise upon that in qualifying and race one.

“There’s a really positive feeling inside the team right now – a sense of underlying confidence. We’re very comfortable with the Corolla, and I think we will only get stronger and stronger as the season settles into its stride.”

“More than any other season I’ve known in the BTCC, I think every race is really going to count this year – particularly now tyre choice is no longer a factor – and in that respect, we did a great job at Donington,” said Ingram. “The Corolla felt strong all weekend; we’ve clearly established a good baseline with it, and that’s obviously encouraging for the remainder of the campaign.

“I think we could probably have pushed for pole in qualifying – I initially thought the lap time that put us at the top of the order midway through the session would be enough – but we would have had to risk just a little bit more to get the very most out of the car and we decided it would be better to save a set of tyres as P4 still left us well in the mix.

“I was chuffed with my move on Oliphant on the first lap of race one and we were looking to gain further ground, but then the contact between Sutton and Turkington delayed us a bit – I came round the corner to find Colin jumping on the brakes, with the result that I ran into the back of him. That blocked a lot of the engine intake and caused overheating issues which we subsequently had to nurse for the rest of the race. I was pretty happy to come away with fourth considering the damage we were carrying, and it represented solid points towards the championship.

“I thought the Corolla handled the ballast really well in race two. Donington Park is all about momentum, and the second you get slowed by the car ahead or have to defend from the car behind, you find yourself losing so much time. Being in close company throughout, I was mindful of not wanting to get caught up in any incidents, and it was satisfying to take another fourth-place finish.

“As is often the case, race three was then a real elbows-out affair. We had some enjoyable battles and it was good to directly measure the Corolla against quite a few of the other cars. I could attack the whole way through, which was very promising. With one more lap, we could definitely have had fifth, but I was still happy with sixth.

“I think we are in a positive place going to Brands Hatch and I’m feeling excited. I love the ‘GP’ circuit – it’s a proper old-school challenge and we’ve usually gone well there. The aim is more of the same to keep ourselves in the hunt – and if a win or podium is there for the taking, we will of course grab it with both hands.”