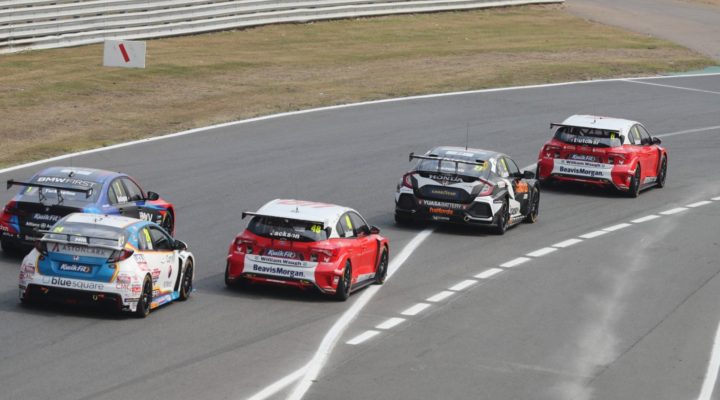 The Motorbase Performance Ford Focus of Butcher controlled much of the race – albeit coming under constant pressure from Cammish and reigning champion Colin Turkington – before a late safety car period bunched up the field.

Ironically, the delay was caused following contact between Matt Neal’s Honda and Aiden Moffat’s Infiniti and the situation eventually played into Cammish’s hands as Butcher suffered with a puncture immediately after the restart.

Cammish had driven well throughout the contest and following his own penultimate lap heartbreak on the Grand Prix circuit last season, it was maybe poetic for the Yorkshireman that he was able to benefit from a rival’s misfortune.

An emotional Cammish admitted to shedding a tear as he crossed the line as he finally banished those painful championship memories from last November, when his title challenge ended in the barrier at Hawthorn Bend.

“It was very tough coming back here,” said Cammish. “I had a lump in my throat yesterday and, I won’t lie, I shed a few tears then. For the team to bounce back and for me mentally to recover, I’m really pleased and so proud of everyone involved.

“What a race car they’ve given me. I pushed Rory early on, I didn’t let him have it easy. I had to give him a bit of a break in the middle of the race. I knew if I kept pushing him, obviously with what happened in practice with his blown tyre, I just thought maybe the car couldn’t take it and low and behold it just let go I think with a couple of laps to go.

“Very sorry for him, it’s a shame but the pressure we’ve put on there made him drive the car beyond the limit. But I’m really pleased, the guys have given me a great car so I’m happy to get to the end of that one. Another win. It’s my third race one win in three years here, four out of seven. So we’ve got to be doing a good job here at Brands Hatch GP.”

Team BMW’s Turkington produced an extremely professional drive as he picked off a couple of places before settling for second, but the podium was completed by a jubilant Ollie Jackson.

A consolation prize for Motorbase may be but much much more for Jackson as he scored a second career BTCC podium, and it was fully on merit and speed around the legendary 2.43-mile circuit.

“It’s a shame that it’s at Rory’s expense, and it’s overall for the team a bit of a kicker but my second podium, I’m so happy,” said Jackson. “It was tough running in the heat but we got there in the end.”

The two Toms – Ingram and Chilton – were in feisty mood as the experienced pair shuffled Jake Hill down the order before they kicked off their own little battle. Toyota man Ingram took fourth at the finish, just ahead of Chilton’s BTC Racing Honda and the Infiniti of Ash Sutton.

Donington finale victor Sutton has been unable to show race-winning pace so far this weekend but the talented racer expertly hauled his #116 machine up the order to claim a valuable top six finish.

EXCELR8 Motorsport continue to score well in the all-new Hyundai as Senna Proctor grabbed a season-best seventh place ahead of the recovering Tom Oliphant, who endured a wild slide across the grass in the early laps.

Team Parker Racing’s Stephen Jelley quietly went about his business to claim ninth with MB Motorsport accelerated by Blue Square’s Hill having to settle for tenth at the finish.