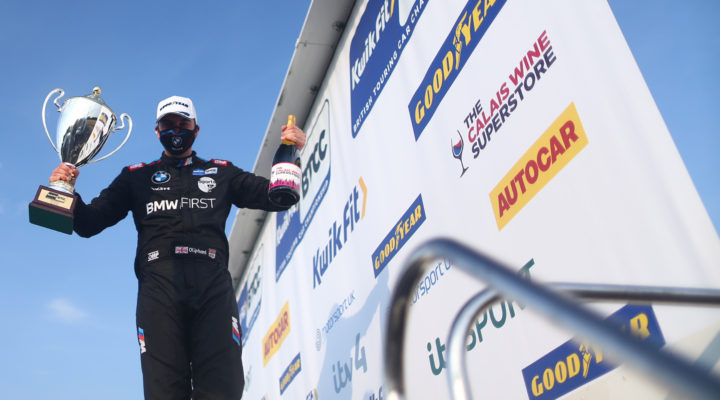 Oliphant made one of the passes of the season so far after he blitzed around the outside of Aiden Moffat and Stephen Jelley on the run down to Paddock Hill Bend early on in the race to take the lead.

When the dust settled after the early skirmishes, however, Oliphant had two of the series’ great racers – Ash Sutton and Rory Butcher – behind him. With the majority of the contest still remaining you could be forgiven for thinking that Sutton or Butcher may have made their way through to the front, but Oliphant proved his pace, prowess and professionalism by not putting a wheel wrong.

Sutton tried every which way but Oliphant would not be denied as he crossed the line in front of his delighted West Surrey Racing team – also scoring the 300th podium in the BTCC for BMW.

“Honestly, it was incredible,” said an emotional Oliphant. “The overtake was spectacular around the outside and then having Sutton right behind me the whole race – I couldn’t think of a worse person to be following me. But I just held onto the tyres, knew where I was strong and made sure I got the exits, and towards the end the car was mega. I can’t quite believe it, I’m over the moon.

“I think that’s the first race where I haven’t made a mistake. I can’t believe it. True credit to the team and this one’s for my dad and my girlfriend Jen who’ve been with me for the last ten years through all the hard times and the good.”

Second went to Sutton but third changed late on as both Motorbase Performance cars suffered with punctures. It was yet more podium heartache for Butcher as the fantastic Stephen Jelley sailed past to secure an extremely popular rostrum for Team Parker Racing.

“We had an absolutely blinding start, we managed to stay out of trouble,” confirmed Sutton. “We got a few little elbows from other people but we kept it clean and picked them off. Unfortunately, I just couldn’t match what Tom’s got. I think carrying that little bit of weight that we had hurt the tyres towards the latter part of the race and he had the length in a straight line. But I’m over the moon that we clawed it back from tenth, what more could I want?”

“However it comes I’ll take third,” enthused Jelley. “Well done to the team, we’ve done really well. It’s not a strong circuit for us so I’m over the moon.”

Aiden Moffat made it a double celebration for Laser Tools Racing as he secured fourth. The young Scotsman started on pole before being shuffled down the order, but the #16 driver recomposed himself to bring home his best result of the season so far.

Colin Turkington has driven like a silent assassin throughout the day around the 2.43-mile circuit – this time routinely improving from 12th on the grid to take fifth – extending his championship lead in the process.

Matt Neal saved his best performance until last as he surged from the back of the field to grab a top six finish for Halfords Yuasa Racing, whilst James Gornall kept his nose clean to secure an impressive seventh. It ended a memorable day for the Audi S3 driver as he recorded three solid points finishes in only his second BTCC event.

Tom Chilton (BTC Racing), Senna Proctor (EXCELR8 Motorsport) and Sam Osborne (MB Motorsport accelerated by Blue Square) completed the top ten, but there were a number of non-finishes in the finale.

Trouble kicked off on the opening tour when an out-of-shape Proctor caused a knock on effect that took out the likes of Jack Goff, Tom Ingram and Adam Morgan. Jake Hill suffered more puncture despair, whilst Dan Cammish’s Honda ground to a halt with a mechanical issue for the second successive race.