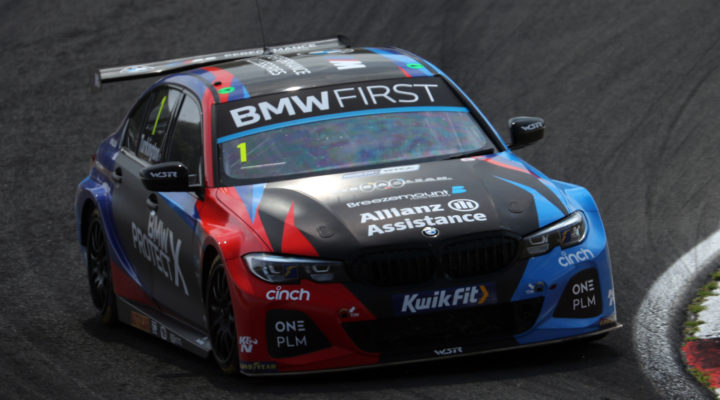 Cammish bogged down from pole position and initially dropped to fourth as Turkington and Ingram took charge at the head of the field, but the Halfords Yuasa Racing man was soon back into third to set up a three-way tussle.

The story of the race belonged to Rory Butcher as the Motorbase Performance driver roared from 25th on the grid to take fourth at the finish, eventually passing team-mate Ollie Jackson.

Butcher faced heartbreak whilst leading the opening race due to a late puncture, but the Scotsman bounced back in style with a breathtaking drive in the second contest. His Ford Focus stable-mate – Jackson – is also enjoying the best day in his BTCC career so far as he followed up a podium in the opener with a fantastic top five finish in the next bout.

Race-winner Turkington isn’t having so much luck when drawing a ball at random for the reverse grid race 3, as for the second week running the BMW star picked out the number ’12’, meaning the front row for the finale around the 2.43-mile circuit will consist of Laser Tools Racing’s Aiden Moffat and the Team HARD-run VW of Jack Goff.

The final race of the day starts at 1730 with all the action being screened live on ITV4.

Colin Turkington said: “The 3 series was just beautiful in that race. It was like Donington, I had to try and beat Dan to the first corner, which I did with no problem. But the pressure was on from there. It was Ollie initially and then Tom Ingram hot on my heels, a tough race because when you’re leading you can’t afford any mistakes – the guys get a sniff and they’re right on you. It was a close to perfect race and a big thanks to the team because, like at Donington, my car was improved for race two and that’s why we had that outstanding pace, so I’m really pleased to chalk another win.

“The weather is perfect for us today but it’s very important to capitalise on days like this. Because our season runs in November this year, which will be cold wintry and dark which doesn’t necessarily favour us so much. It’s important for us to be strong in the summer months, which we usually are, so there’s no feeling like crossing that line in first place.”

Tom Ingram said: “First time this year, I’m absolutely thrilled. I feel like I’ve missed out on at least three podium finishes this year so I’m pleased to get the first one out of the way – get it done. And the car felt magnificent, towards the end I was happy just to nurse it really and take the time. I knew that we were going to be dropping off and it was really hard work, especially with tyres as well. Generally the car has felt really strong this weekend so it’s exciting, we’ve had two good solid points scores, so the Toyota Gazoo Racing UK with Ginsters car is feeling pretty hooked up.”

Ash Sutton said: “I think not running in FP2 has put us on the back foot a little this weekend. In FP1 we came in and the balance wasn’t quite there, so we’ve been playing catch up. It was a hard qualifying and I lost my best lap. Starting 14th, the whole day’s just been about being patient with it, finding the right places to overtake. It’s been a little harder and the temperature’s not helping but we’ve pulled a podium out of it so it’s perfect.”