INGRAM SCOOPS FIRST SILVERWARE OF THE SEASON AT BRANDS HATCH 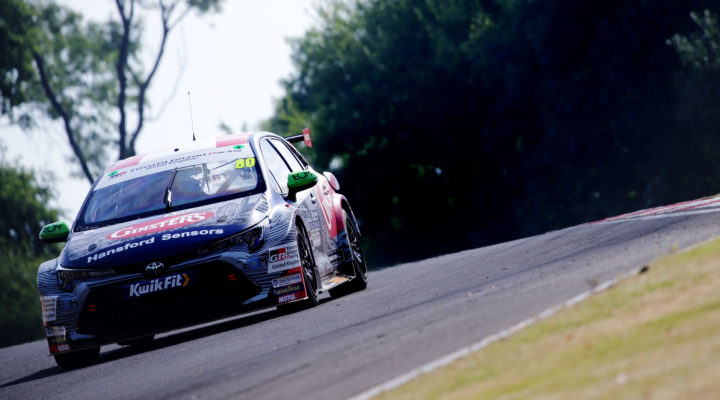 On a hot day in Kent, the Bucks-born racer was disappointed to qualify only eighth amongst the 26 high-calibre protagonists in the UK’s premier motor racing series, but he made it clear that he did not intend to stay in that position for long…

After moving forward on the opening lap of race one, Ingram settled into a four-car battle over third. He subsequently demoted Jake Hill from fifth with a committed move through Surtees on lap 12, shortly before the safety car was summoned due to an incident further down the order.

Following an excellent re-start, he gained another place when the leader suddenly slowed with a puncture, after which the two-time BTCC Independents’ Champion proceeded to hassle Ollie Jackson all the way to the chequered flag, ultimately falling barely 0.3s short of a first podium finish of the 2020 campaign.

He was not to be denied a second time. Despite the ballast aboard his Toyota Corolla having increased to 42kg, Ingram took advantage of a slow getaway by the pole-sitter to rise to third when the lights went out in race two in front of the live ITV4 television cameras, before dispatching Jackson with a brilliant pass between Westfield and Sheene Curve later around the opening lap.

Immediately applying pressure to Colin Turkington in the lead, the 26-year-old had reduced the deficit to less than a third-of-a-second by posting what would remain the race’s fastest lap when the safety car was called again just as he was preparing to challenge, stopping his burgeoning momentum in its tracks.

When the action resumed, the near two-second buffer he had established to race one winner Dan Cammish behind was suddenly no gap at all, and Ingram thereafter found himself in the unenviable position of having to try to attack and defend all at once. With no way past defending champion Turkington, when Cammish fell away in the closing stages, Ingram backed off to secure second place and with it move up to the same spot in the points table.

Race three, unfortunately, turned out to be something of a non-event. From 11th on the partially-reversed grid, the Speedworks Motorsport ace made a good start and was set to gain some ground following a first lap tangle when Jack Goff came spearing back across the circuit right into the side of his Corolla, precipitating an early bath and marking a disappointing end to an otherwise excellent weekend.

Ingram will next travel to Oulton Park in just over a week’s time (22/23 August) sitting fourth in the Drivers’ standings, as Toyota Gazoo Racing UK with Ginsters consolidated fifth position in the Teams’ classification.

“Overall, that was another really encouraging weekend, said Team Principal Christian Dick. “We made regular improvements to the Corolla and took a step forward in every session, and we learnt a lot along the way. Brands GP is a real all-round challenge and a notoriously demanding track, with a little bit of everything from slow corners to mid-speed sections and fast turns. That means you need a car that will handle those extremes and can ride the bumps and use the kerbs when required, which is a very difficult balance to strike but the Corolla proved to be competitive in every respect.

”We had strong pace with weight on-board throughout and Tom drove extremely well. He had a car underneath him that he could properly race with and he took full advantage of that, getting his elbows out when necessary and pulling off some brilliant overtaking moves – I thought races one and two were both really feisty drives, much like at Donington Park.

“At the same time, they were measured performances. We could perhaps have pushed for the win in race two, but not without what we felt – at this stage of the season – would have been unreasonable risk. Second place was a great result, and with so many people struggling with tyre temperature and engine temperature in the heat, we chose to safely bag the points and move on to the next one.

“That gave us reasons to be optimistic for race three, even starting down where we were, and I think we would have been on for another really good finish but Tom was simply an innocent bystander in somebody else’s accident – there was absolutely nothing he could have done to avoid it. It’s obviously disappointing to have a DNF so early on in the campaign – especially through no fault of our own – but you’re never going to get through an entire season in the BTCC without any issues or incidents so we’ve just got to take it on the chin and focus on the positives, of which there are clearly many…”

“I’ve got to be happy with the way Brands Hatch went on the whole,” said Ingram. “Everything gelled extremely well, and the Corolla got better and better each time we took to the track. We were lacking just a little bit of performance in qualifying – even if I had hooked all of the sectors together, it would only have gained us a tenth-of-a-second or so, which wouldn’t have changed that much – but we definitely had the speed to fight for the podium in race one.

“Unfortunately, we just got caught up in a few too many squabbles, which seems to have been a feature of our season so far. Once I managed to clear Hill, I quickly closed the gap to Jackson ahead. The Corolla was working brilliantly, but we simply lost too much time in the first half of the race, which was a little frustrating.

“It was fantastic to finish second in race two, though, and fastest lap proved the pace we have in the Corolla. I knew I needed to get past Jackson quickly after the experience of being held up in race one and my move was forceful but fair, without putting either of us at risk. It was just a shame that the safety car blunted our charge early on and possibly cost us a shot at victory, as we had to contend with Dan as well as Colin after the re-start. Once Dan disappeared, I backed off to look after the car and make sure I brought it home.

“Race three was one of those things that happens sometimes when you’re starting in the middle of the pack – wrong place, wrong time. Thankfully, it didn’t do too much damage to the car, but there’s a safety system in the fuel tank and the impact somehow activated the shut-off switch, which cut all the fuel to the engine so I couldn’t get going again. Given the rate of attrition in that race, I think we could have come away with another really strong result, but equally, at least we didn’t lose any points to some of our major rivals, so it could have been worse and we’re still in a very good position moving on to Oulton Park.”