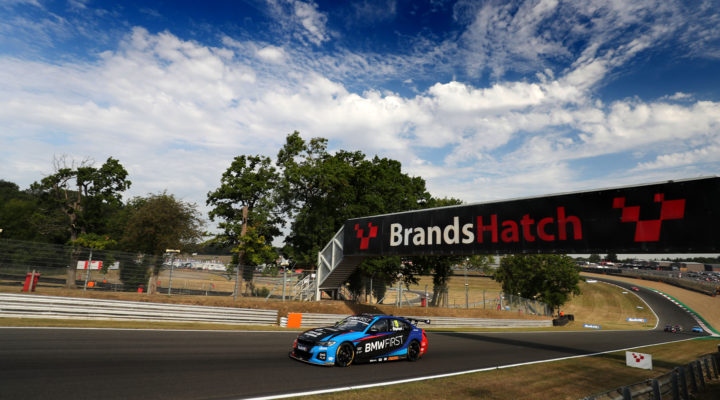 In what proved to be a sweltering second event of the season around Brands’ Grand Prix layout, the Team BMW star didn’t put a wheel wrong in race three to clinch a sensational maiden win, whilst also handing West Surrey Racing their 300th podium in the series.

After kicking off his campaign at Donington Park with a rostrum finish, Oliphant arrived at the Kent venue in optimistic mood and once again underlined his speed in qualifying behind the wheel of his BMW 330i M Sport.

In an ultra-competitive session, the BRDC Member set an identical time to team-mate Colin Turkington to secure sixth place on the grid for the opening encounter, whilst carrying 30kg of success ballast.

Race one saw the 29-year-old have to dig deep and show his fighting spirit, after contact sent him tumbling down the order on the opening lap heading into Westfield.

Managing to keep his rear-wheel-drive machine out of the barriers, Oliphant soon set about bouncing back from the lower end of the top 20. Progressing up through the order during the remainder of the race, the 29-year-old recovered to cross the line in eighth.

Lining up on the fourth row for race two, Oliphant found himself in the thick of the action once again as he battled hard, dropping back to ninth at one stage before managing to fight back to seventh.

Hounding the top two on the opening lap, Oliphant got a great run on the leaders exiting Clearways and after going three-wide down the start-finish straight, he made a bold move around the outside to take the lead.

From there, Oliphant remained out front but soon had to showcase his defensive driving skills as he was chased by Ash Sutton for the remainder of the race. Despite Sutton’s best efforts, Oliphant wasn’t to be denied and he crossed the line to enter the BTCC winners’ circle for the first time.

Following his breakthrough BTCC victory, Oliphant has now moved up to third in the Drivers’ Championship, 25 points behind team-mate Turkington.

“I’m lost for words – I can’t believe I’m a BTCC race-winner!” said Oliphant. “We’d been in the thick of the action in races one and two so I knew I had to make race three count and try to come away with a big result.

“I made a great start and the overtake for the lead was spectacular – I saw my opportunity and took it! Once I got into the lead and saw Ash in my mirrors, I just thought that I couldn’t have had a worse person behind me because he was always going to give me a hard time.

“We didn’t have the best tyres but the car was mega – huge credit to the whole team – and I was so up for the fight. I knew where our car was strong and where we needed to cover Ash, and thankfully it all came together in the end.

“This victory is for my dad, my girlfriend Gen and the whole family – they’ve been with me through the highs and the lows over the past ten years and it is as much their win as it is mine!”

Next on the Kwik Fit British Touring Car Championship schedule is a trip to Oliphant’s home circuit, Oulton Park, on 22/23 August.