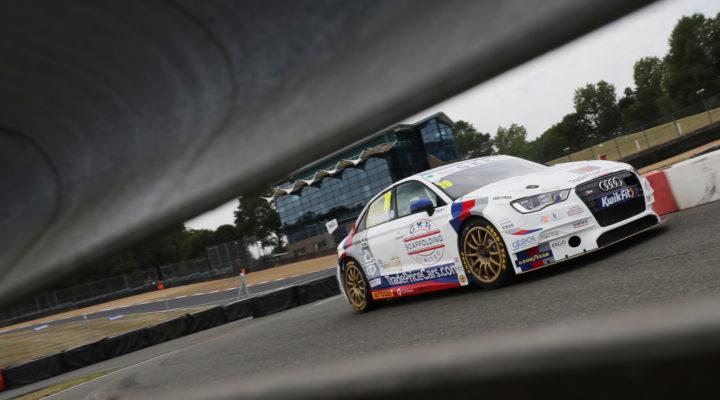 GKR TradePriceCars.com will hope to build on the solid performance it put in last time out at Brands Hatch, when the Kwik Fit British Touring Car Championship heads to Oulton Park this weekend for the third event of the year.

The squad produced a strong showing at its home circuit two weeks ago, with series rookie James Gornall picking up points in all three races – including a pair of top ten finishes – and team-mate Bobby Thompson scoring twice himself in the sister Audi S3.

Having secured silverware for the first time this year thanks to Gornall lifting the Jack Sears Trophy at Brands Hatch, the team now makes the trip north optimistic about its chances at a circuit where the Audi has gone well in the past.

That was particularly evident twelve months ago, when Jake Hill secured victory on the road in the final race of the weekend before a post-race penalty dropped him down the order.

Although yet to open his BTCC account at Oulton Park, Thompson has enjoyed success at the Cheshire venue previously, securing podium finishes during his time in the Volkswagen Racing Cup.

Having scored points in four of the six races run so far this season, the 24-year-old is already well on course for the best season of his BTCC career to date and will seek to add to his tally to not only strengthen his Jack Sears Trophy position, but also to move up towards the top ten in the Independents’ championship.

While he will be racing the Audi for the first time at Oulton Park, Gornall kicked off what would prove to be a title-winning campaign in the MINI Challenge with victory in the opening round at the Cheshire circuit.

The former British GT title winner was one of the star performers on track at Brands Hatch as he bounced back from a difficult start to his BTCC career, and will look to build on the results he secured two weeks ago to also make strides up the championship order.

“I’m feeling positive about the weekend and hopefully the weather might be cooler, as those conditions seem to suit our car a bit more,” said Thompson. “I’ve spent some time in the sim since Brands Hatch and that is something that is proving to be really helpful as the model of the car is pretty much bang on. It’s allowing us to trial a few things that we can then try on the car when the weekend comes around, and helps me to get my eye in for a circuit I’ve not been to for a while.

“Oulton Park is a great track and one I enjoy, although it’s a challenge in a touring car as it is so busy and there is always something going on; you can’t relax. We know the car is strong at Oulton after Jake’s performance last year, but the new cars this year are quick and we have to raise our game compared to last season.

“I’ve started the season well with double scores in both meetings so far and the target this weekend is to get points in all three races and push for the Jack Sears Trophy – that’s the end goal. We’ve been consistently in the points, and now we have to push to break into that top ten.”

“Brands Hatch was a great weekend and we were able to build on Donington Park, where we didn’t get chance to show our true potential,” reflected Gornall. “The aim now is to go to Oulton Park and improve again to build on our results last time out.

“I’ve won at Oulton Park previously in the MINI Challenge and also in the BMW Compact Cup so it’s a circuit where I have a good record and one that I really enjoy – although I know that doesn’t always mean a good weekend lies ahead.

“The Audi is a proven package around Oulton but the competition is moving on all the time with the new cars on the grid and we have to push hard to take the fight to them. I’ll be working with my engineer on a few things to try and find more one lap pace as we know we have a good race car – we just need to make sure we are starting Sunday higher up the grid.”