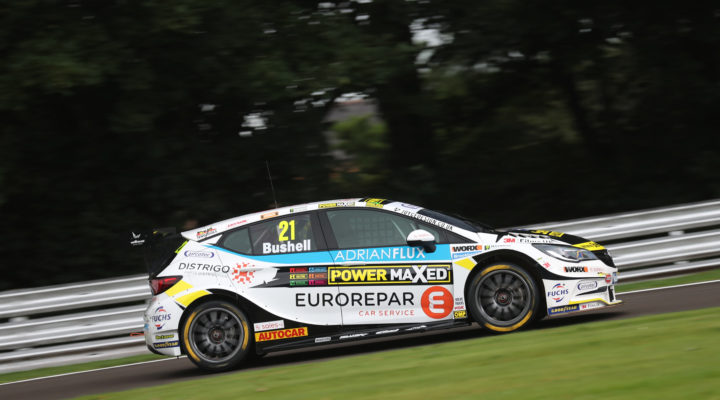 Power Maxed Car Care Racing returned to BTCC action by topping the opening free practice session at Oulton Park as drivers were greeted with mixed conditions in the North West of England.

Whilst the wet/dry session proved difficult in terms of providing pointers for the weekend ahead, it may be something that the drivers and teams will have to get used to with changeable weather forecast for the foreseeable at the picturesque venue.

PMR made the most of its on-track return as Mike Bushell got to grips with the #21 Vauxhall Astra. Bushell found the right window to bolt Goodyear dry tyres onto his machine as he produced a lap time more than 1.5s quicker than the chasing pack as conditions improved in the final ten minutes.

Michael Crees also enjoyed his run as The Clever Baggers with BTC Racing driver went second on the timesheets, ahead of Halfords Yuasa Racing’s Dan Cammish – both in the Honda Civic Type R Fk8s.

“It’s really difficult to learn anything,” said Cammish. “One minute it’s raining and then the next minute the sun is shining.

“These really are nightmare conditions for drivers and teams and you don’t know whether to go with a dry setup, wet setup or somewhere in the middle.”

Toyota Gazoo Racing UK with Ginsters’ Tom Ingram is chasing a first ever BTCC podium at Oulton Park and the Corolla driver kicked off his weekend in decent fashion by setting the fourth fastest time, with Motorbase Performance’s Rory Butcher and BTC Racing’s Tom Chilton completing the top six.

Jack Goff has produced many a giant slaying in mixed conditions and the RCIB Insurance with Fox Transport man will be hoping for similar this weekend – the VW driver was seventh in his his opening run with Excelr8 Motorsport’s Senna Proctor just behind.

MB Motorsport accelerated by Blue Square’s Jake Hill led the way early on but eventually had to settle for ninth, whilst Laser Tools Racing’s Ash Sutton rounded out the top ten.

The second Free Practice session takes place at 1225, before qualifying for Round 7 of the 2020 Kwik Fit British Touring Car Championship commences at 1525 – the latter can be watched live via www.itv.com/btcc.