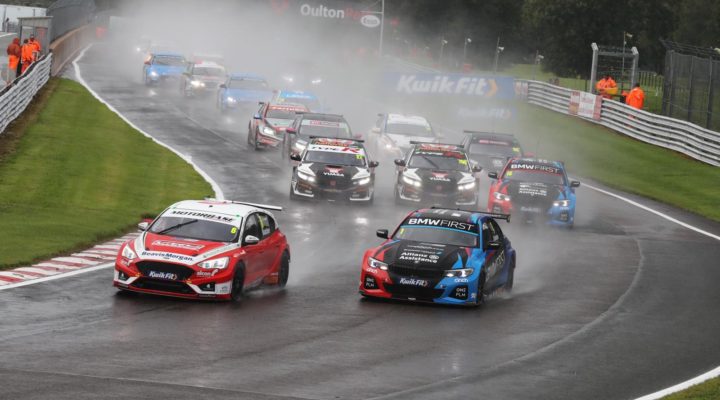 BTC Racing’s Josh Cook looked to have claimed his first Kwik Fit British Touring Car Championship victory of the season in the opening contest at Oulton Park, but he was subsequently excluded from the result after his car failed post-race ride height checks, meaning pole-sitter Rory Butcher inherited the victory.

A pre-race downpour and a delayed start – following an off for Carl Boardley’s BMW on the initial green flag laps – added to the tension, as Cook made a poor getaway from the outside of the front row. Cook’s Honda Civic Type R suffered with wheelspin off the line and he was immediately passed by both Team BMWs of Colin Turkington and Tom Oliphant, as well as Halfords Yuasa Racing’s Dan Cammish.

Pole man Butcher initially disappeared into the distance as the rear-wheel drive BMWs struggled in the soaking wet conditions, whilst Cook was busy beginning his eye-catching comeback.

A fired up Cook made a number of passes through both Lodge and Druids corners and he was soon on the rear of Butcher’s Motorbase Ford Focus, following a brief safety car period due to an incident involving rookie Ollie Brown.

Cook’s moment came on the run through Old Hall Corner on lap six, with Cook eventually completing the pass on the inside of Cascades.

Cook streamed away to take a commanding win from Butcher, with Cammish completing the podium ahead of a tenacious Jake Hill in the MB Motorsport accelerated by Blue Square Honda.

It was all change after the race, however, as Cook was excluded from the result following a ride height infringement during post-race checks. Subsequently, Butcher takes his first win of the campaign with Cammish and Hill completing the rostrum positions.

Despite dropping to fourth at the finish, reigning champion Turkington produced another consistent display in order to pick vital championship points in his maximum ballast-laden 3 Series.

BTC Racing’s Tom Chilton had a relatively lonely run to fifth, whilst Tom Ingram’s charge to sixth was anything but lonely.

The Toyota Gazoo Racing UK with Ginsters star was seemingly attached to the Laser Tools Racing Infiniti of Ash Sutton for most of the race, with the two young chargers making contact several times. Ingram eventually made the breakaway as he approached the Carlube-backed Mercedes of Adam Morgan, with the former relegating the latter down a position late on.

Morgan held on to seventh from Sutton, whilst Excelr8 Motorsport duo of Chris Smiley and Senna Proctor completed the top ten positions.

A total of four cars failed to make the finish, most notably Matt Neal on his 699th BTCC race start. The Halfords Yuasa Racing man had to park his Honda after receiving a black and orange flag for a mechanical issue, meaning the three-time champion will commence his 700th contest from the back of the grid.

Rory Butcher said: “After Brands Hatch, we finished and got a podium with points on the board. I was determined to try and win but Josh was on a mission and put me under pressure. When alongside I tried to hold him off but in the end he got through and was the quicker man. Risk management was on my mind and I did try to hold him off the best I could, but Cascades was his and then I just tried to find a rhythm.”

Dan Cammish said: “I’m pretty happy with that and it’s a good effort to come away with third; you can’t argue if you go forward. We didn’t have the speed to fight the front two and I had problems getting the car stopped early on. But on days like today when you haven’t done many laps in the rain, you could easily go off into the gravel. I knew where Jake was throughout and how to cover him off.”