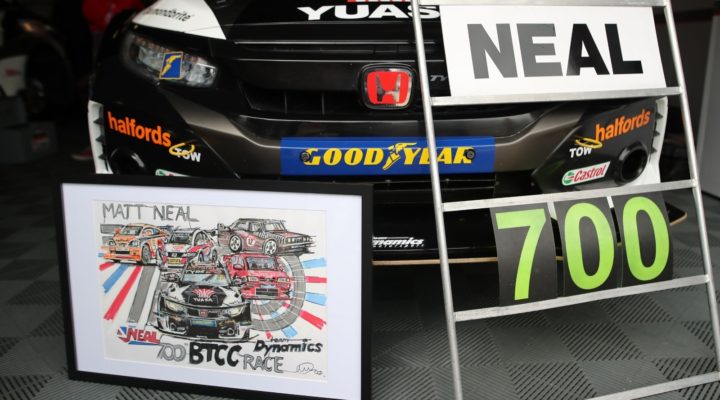 The Cheshire circuit is set to play host to the 53-year-old’s latest accolade, with the Halfords Yuasa Racing Honda Civic Type R FK8 emblazoned with the #700 race number for the duration of the weekend.

Impressively, Neal has competed in the UK’s premier motorsport series for a record 30 years, having made his debut at Silverstone in 1991.

The first driver to claim the overall title in a Honda in 2005, Neal went on to achieve a further two overall Drivers’ championships in 2006 and 2011, alongside a record six Independent titles throughout his staggering BTCC career so far.

“Obviously, my maiden championship win was fantastic,” said Neal. “The first time out in 2005 we won with the Integra and we went on to secure the title.

“The first title is always very special but winning with the Civic in 2011 was also a great achievement.”

Although Neal’s championship successes have been achieved with Honda, his BTCC breakthrough came with fellow Japanese marque Nissan back in 1999.

Famously, Neal won a cheque for £250,000 after taking victory at Donington Park where the prize fund was offered to any privateer team who could win a race outright – unheard of in that particular era of the BTCC.

“1999 was obviously a very special time,” said Neal. “People don’t realise how hard it was to be an Independent team in the 1990s.

“To win the £250,000 was an incredible feeling and the springboard for my career.”

With accolades such as 190 podium finishes and more than 1,000 laps lead, the Kidderminster driver’s BTCC career is unequalled in numerous categories, check out the fact file below…