SUCCESS FOR BUTCHER, SUTTON AND MORGAN AT OULTON PARK 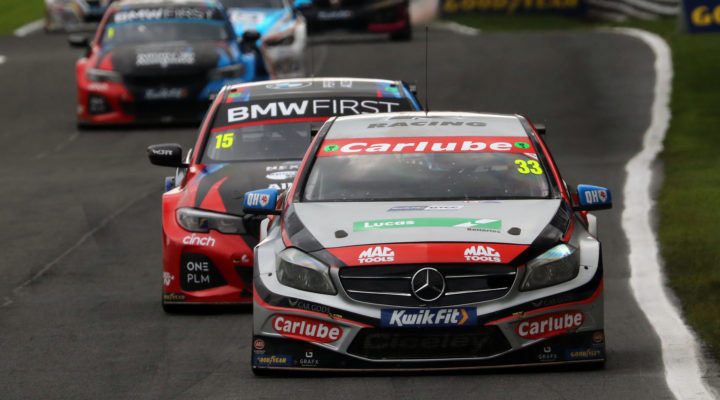 Changeable conditions produced three varied contests with rain falling for the first two bouts, before things dried out in time for the final reversed-grid race.

Butcher benefited from Josh Cook’s misfortune in the opener as the on-track race winner was later excluded from the result after his BTC Racing Honda Civic Type R failed a post-race ride height check.

Pole-sitter Butcher cruised into a comfortable lead during the early stages, whilst Cook had to use all of his talent to fight back after initially losing places off the line.

Cook made a number of impressive moves on his way to eventually catching and passing Butcher, but despite crossing the line comfortably clear at the head of the field, his celebrations were soon cut short due to the aforementioned penalty.

The result meant Butcher had claimed his first victory of the season, as well as scoring a maiden success for the all-new Motorbase Performance Ford Focus.

Team BMW’s Colin Turkington settled for a solid fourth with his 3 Series carrying maximum ballast, but even better results were to follow for the reigning champion.

Laser Tools Racing’s Sutton then showed his class by producing a dazzling display in wet conditions to storm from eighth on the grid to take victory in race two.

The 2017 champion made a stellar getaway and was into fourth early on but still had title rivals – Turkington, Cammish and Butcher – ahead of him.

Turkington and Cammish enjoyed a race-long battle and were briefly joined by Sutton, before the latter saw them both off with a couple of bold and opportunistic manoeuvres.

The moment of truth came before mid-distance as Sutton’s Infiniti Q50 coasted up behind Butcher’s race leading Ford Focus ST. The pair crossed the line nose-to-tail before Sutton blasted around the outside of Old Hall Corner and into the lead.

Sutton never looked back as he claimed a commanding second victory of the season while Butcher took second place behind him.

2019 title protagonists Cammish and Turkington battled it out for almost the entire contest, with the BMW man eventually getting by when the Halfords-backed Honda went too deep into the hairpin.

Carlube TripleR Racing with Mac Tools’ Morgan then performed a defensive masterclass to take an emotional home win in the final race at the Cheshire circuit – the only dry run of the day.

The Lancastrian has often struggled at his local track – a podium back in 2013 being his only success of note so far – but the Mercedes man delivered in style this time around.

Morgan got the jump on pole-sitter Bobby Thompson off the line as the Audi S3 bogged down, whilst the Team BMW pairing of Tom Oliphant and Turkington made their way towards the front.

Sutton also joined the lead party and suddenly Morgan had three flying rear-wheel drive machines in his mirrors, bringing about a period of intense pressure.

Whilst always seemingly in control, it felt tense throughout, and Morgan had to make his Mercedes A-Class as wide as possible, particularly on the entry to a number of the slower corners around the 2.23-mile Island layout.

Second placed Oliphant indicated to let team-mate Turkington through to have a go at cracking Morgan’s resolve, but the Lancastrian would not be denied, with his victory confirmed under red flag conditions following a late multiple-car incident involving Stephen Jelley (Team Parker Racing), Nic Hamilton (ROKiT Racing with Team HARD) and Ollie Brown (RCIB Insurance with Fox Transport).

Turkington took second, with Oliphant grabbing the final rostrum position of the day.

A trio of top four finishes helped Turkington extend his Drivers’ standings advantage to 19 points over Sutton, whilst Team BMW top both the Manufacturers’ and Teams’ tables.

Rory Butcher said: “After the bad luck at Brands Hatch, we have finished on the podium here with points on the board. I am delighted to get the first win in the new Motorbase Ford Focus. The good thing is our car was potentially the strongest front-wheel drive car out there. The Ford is fantastic here, but the conditions generally just seemed to suit the rear-wheel drive cars more.”

Ash Sutton said: “Everyone at Laser Tools Racing and BMR Engineering did a mega job. I wanted to get the first couple of laps out of the way. It’s very narrow around here and it’s easy to make car contact. But once we got into that clean air into fourth, we knew what car I had beneath me and we knew what we could do with it. Rory [Butcher] made a slight error at turn one, which just allowed me to get underneath him and made my life easier.”

Adam Morgan said: “A win at our home track, with our sponsors Carlube Triple R here too, it couldn’t have happened at a better time! It was very difficult, having Colin [Turkington] behind me for that many laps. We’ve worked and worked and worked with the Mercedes and we keep finding little bits here and there and she’s come good. I’m a bit emotional actually. It’s a massive boost to everyone. We just keep pushing, never give up, never stop trying.”

Colin Turkington said: “It’s been a great day and I leave feeling really positive. The wet conditions were extremely tough, especially in race one, but we took the maximum points available. We had more pace in race two and – although passing is difficult here – my persistence paid off and I got past Dan [Cammish] for third. Tom [Oliphant] helped me in race three by letting me by and I definitely owe him one for that. All in all, it’s been great teamwork by Team BMW and WSR this weekend. We came here to do a job and we did it.”