MOTORBASE READY TO AIM FOR MORE TROPHIES IN SCOTLAND 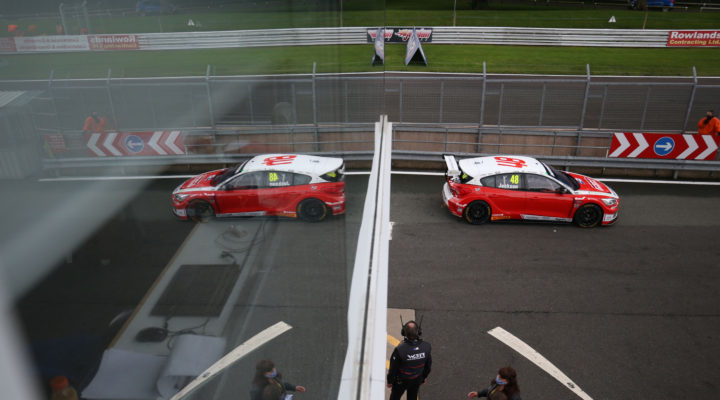 Kwik Fit British Touring Car Championship team Motorbase Performance will be approaching this weekend’s meeting at Knockhill on the crest of a wave after opening its 2020 victory account last time out.

The Kent-based squad tasted the champagne at Oulton Park on Sunday when Rory Butcher powered the Ford Focus ST to its first win of the season in the opening race of the weekend. The Scotsman prevailed when first-on-the-road Josh Cook was penalised post-race, handing the spoils to the reigning Independents’ Trophy holder.

Butcher backed that up with second place in the weekend’s next encounter before a solid top ten finish in the reversed-grid finale left him as the biggest scorer from the event in Cheshire, which had been blighted with tricky weather throughout.

Despite the victory, Butcher claims he is still aiming higher: “It was the weekend that we really needed. We got another pole position which was such a great feeling to do that, and it put us in the best place for Sunday’s races.

“We will inherit the points and take the trophy for race one but I’m eager to get that first win in this car across the line. It’s unfinished business,” he says.

Butcher was pleased to have tamed the treacherous Tarmac and has his sights firmly focused on more silverware when the BTCC visits his home track of Knockhill in Fife this weekend.

“The pressure is even higher at home,” added the Scot. “I will definitely try and ride that wave of pressure and turn it into positive energy. I can’t wait to get to my home circuit. I know the place like the back of my hand. I’m really excited to see how this new car will handle the Knockhill circuit.”

After scoring a podium in the previous meeting at Brands Hatch, Ollie Jackson was looking forward to building on that progress at Oulton. However, myriad small issues hampered his charge, although he was solidly inside the points on two occasions.

“I made a mistake in qualifying that really cost me dearly and it is hard to make up places at Oulton Park,” he explained. “We had the pace all day, but I had a problem with the wipers in race one, which really hurt. The car had loads of pace, but I was relying on people’s brake lights to stop and turn the car.”

Contact at the first turn of race two knocked out the steering on his fourth-generation Focus but he still managed to wrestle the car home in 15th spot. A penalty for exceeding track limits pushed him down to 19th in race three.

Jackson says he will be looking for tips from the other side of the Motorbase garage as he aims to boost his chances in Scotland.

“The one saving grace [from Oulton Park] is that we made a lot of progress with the car. We are leaving in a much better place than when we came here in terms of the set-up,” said the 36-year-old. “I think the things that we have done with the car at Oulton will definitely help it for Knockhill.

“Obviously Rory has got the home advantage and it should be a good weekend for him. If I can match his data and stick as close to him as possible, hopefully I can get back to normal service.”

Andy Neate left Oulton Park full of optimism, despite the fact the three races didn’t quite deliver the results he was aiming for in his Motorbase car. He lined up on the 12th row of the grid and made strong progress in the opening race, passing eight cars before the flag and ended up in the points.

“There are lots of positives to take away from the weekend,” said Neate. “It was a bit of a mixed bag in terms of weather, which didn’t help, and in the end, it was an up and down weekend. Anyhow, we will look ahead to Knockhill now. I have spoken to Rory, who says the circuit is quite different from when I last raced a BTCC car there in 2012, I’m really looking forward to it.”

The results at Oulton Park were a justification of the hard work that the Motorbase crew has put into getting the three brand new Ford Focus machines on the grid for 2020, says Team Principal David Bartrum. However, he is still hungry for what he calls a ‘proper’ victory.

“A win is a win. I would have liked to have had it on our own in the dry though,” said Bartrum. “I feel sorry for Josh Cook because the driver didn’t do anything wrong, it is just one of those things that can happen.

“I’m over the moon to get the first win for the new Focus though. The car has been great out of the box. It has been in the mix from day one since it turned up to qualifying in Donington. We have now got our first win, Rory [Butcher] is up to third in the championship and now we are off to Knockhill.”

The trip north of the border puts pressure on the team, with several key Motorbase staff going straight from Oulton Park to Scotland to avoid a 1400-mile round trip in two days. Despite the tight turnaround, Bartrum says the squad and all of its drivers are relishing the next challenge.

He says: “The Focus has tended to go well up there. I feel sorry for Rory that he won’t have a crowd there. I think the home spirit will be high and I hope we get the benefit of that as a team. Not only does Rory know every kerb at Knockhill, he has also worked there so he has probably painted every kerb. Hopefully we can put that knowledge to good use for our drivers.”

The next rounds of the 2020 Kwik Fit British Touring Car Championship take place at Knockhill on Sunday (30 August). The races will be shown live on ITV2, from 1040.