SUTTON SETS THE PACE IN FP2 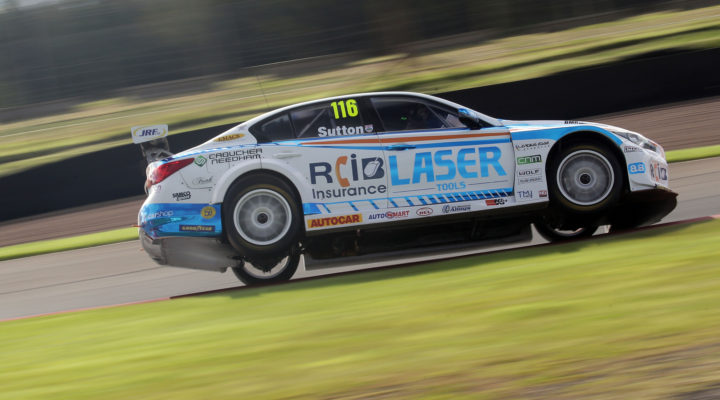 Sutton has been one of the outstanding drivers of the season so far and now the Infiniti Q50 man is looking to deliver at his team’s home track.

“It was getting a pounding from the kerbs around here, but other than that, the car’s mega,” said Sutton. “It’s always hard to say going into qualifying, you don’t know what people’s plans are during FP1 and FP2. We know where we’re at and we know what we’ve got, so fingers crossed!”

26-year-old Sutton claimed a win here on his way to the title back in 2017 and another the following year, so he’s sure to be a contender come tomorrow afternoon, but there are a host of young chargers gunning for glory.

Tom Ingram’s season so far has largely been blighted by frustration and misfortune but there’s no denying the pace of the Toyota Corolla driver and car. Ingram claimed second in FP2 and his Toyota Gazoo Racing UK with Ginsters team believe a first victory of the season is in their sights.

Ingram did, however, miss the first half of the session while his Speedworks squad worked on a minor issue.

“We had an issue at the start of FP2, a cooler pipe with a small bit of weeping around it, so we wanted to make sure that was right before we went out,” said Team Principal Christian Dick. “It wasn’t worth risking, we were pretty confident and comfortable with the pace of the car from FP1, so just made some small tweaks between the two sessions, but all positive in the end.”

Positivity is also running through the Power Maxed Car Care Racing camp as the Vauxhall team proved its practice pace for the second successive weekend, with pilot Mike Bushell sitting third in the timesheets. The Oulton Park event also started in similar fashion for the team and its speed is again on show, but now they require the consistency to score big tomorrow afternoon.

Aiden Moffat confirmed the potential of the Laser Tools Racing’s Infiniti Q50 by setting the fourth fastest time, with the Scotsman targeting his strongest showing so far this season, whilst Oulton Park race winner Adam Morgan was fifth in the Ciceley-run Mercedes.

The Team BMW duo of Colin Turkington and Tom Oliphant were next in the order, whilst FP1 pace-setter Jake Hill was ninth. Hill’s morning lap time remains the quickest of the day so far, as the Kent driver focussed on longer race runs during the second session.

Team Parker Racing’s Stephen Jelley rounded out the top ten in his BMW 125i M Sport.