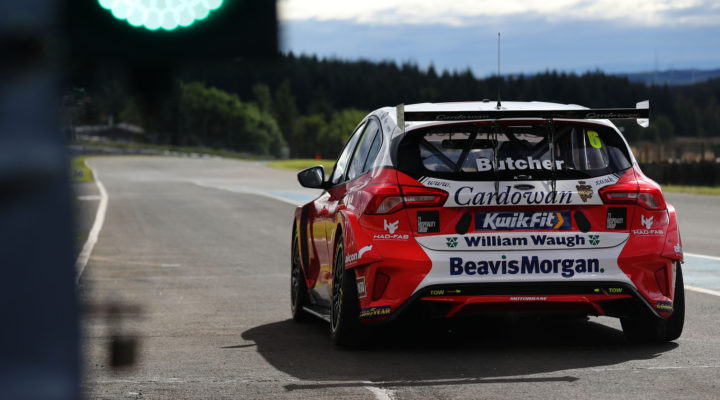 The original race was red flagged following a sizeable accident involving Ollie Jackson (Motorbase Performance), Mike Bushell (Power Maxed Car Care Racing) and Sam Osborne (MB Motorsport accelerated by Blue Square). The rear-right wheel of Jackson’s Ford Focus was locked, which ultimately spun his #48 machine through the chicane and in front of the oncoming traffic. Bushell had nowhere to go – hitting Jackson’s Focus with some force – whilst Osborne side-swiped the Vauxhall Astra ahead of him while trying to take evasive action.

All drivers emerged relatively unscathed, but the race had to be stopped to remove the stricken cars and debris littered across the circuit.

Butcher – having originally got past Excelr8 Motorsport’s Proctor on the first getaway – had to do it all again on the restart, and that’s exactly what he did on the run down to turn one.

The Scotsman never looked back and he pulled away to take a comfortable victory, with the missing Scottish fans being the only disappointment for the talented racer.

“I felt after Oulton, Josh drove so well in that race and I got handed the win; I didn’t want to take my first victory in the new car in that way,” said Butcher. “So to do what we just did there on home ground has made up for it. I’m so pleased for the team. I’ve had quite a difficult day. I was really pleased with race one, making up one place and getting past Cammish was great, but in race two I wasn’t really proud of my performance there.

“I’ve been getting superb starts this year, doing a lot of studying into how to launch the car best and I was confident going into that race that I could lead going into turn one.

“This event means so much to me. As soon as the calendar comes out it’s the event I’m looking forward to it and normally you get all the Scottish fans here. It really makes the venue have an incredible atmosphere. Unfortunately we didn’t have that today, but the Scottish marshals were waving the Scottish flag at the end of that race so I got a little buzz from that.”

Similarly, Proctor took a relatively lonely second ahead of a delighted Tom Chilton – the BTC Racing driver scoring the 101st podium of his racing career.

The win would have been nice but today ultimately with the pace of the car P2 was okay,” said Proctor. “We struggled in race one and two, but it’s another trophy for the car, which I was determined to do for the team to repay them for all their hard work. I’m happy with today’s work and I feel like we can roll on to Thruxton in a good place.”

“We’re very very happy, it’s big news for us here at Knockhill this weekend,” confirmed Chilton. “That was actually BTC Racing’s 102nd race in the BTCC and my 101st podium in my racing career. It was a big day today for us, we’re very happy.”

Team BMW’s Tom Oliphant grabbed fourth with a phenomenal move past Chris Smiley’s Hyundai and Jake Hill rounded out his best day of the season so far with fifth in the MB Motorsport-run Honda Civic Type R.

Halfords Yuasa Racing’s Dan Cammish completed the top six, whilst the fading Smiley had to settle for seventh at the finish.

Smiley was often the cork in the bottle as the Northern Irishman had a host of contenders snapping at his heels. Team BMW’s Colin Turkington and Laser Tools Racing’s Aiden Moffat swapped positions twice whilst both trying to get by Smiley, with Moffat eventually getting the better of the championship leader.