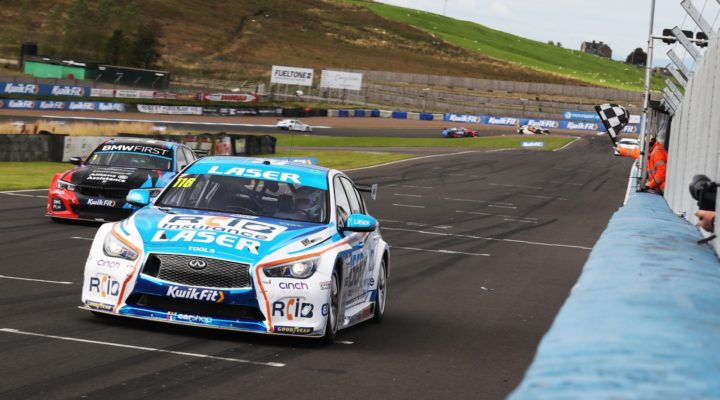 Team BMW’s Turkington got the jump by front-row starter Jake Hill on the run down to turn 1 but the BMW 3 Series had little for Sutton’s Infiniti Q50 ahead of him in the early stages.

The race bunched up when a safety car period was called for following a significant accident for BTC Racing’s Josh Cook at the chicane. Bath racer Cook wriggled through the notorious section of track, losing the rear-end of his Honda Civic Type R at high speed and crashing backwards into the barrier.

Turkington seemed to be the faster of the front two immediately after the restart, but realistically was never close enough to make a significant move and the same could be said for the two pairs of challengers behind them.

MB Motorsport accelerated by Blue Square’s Hill held off Tom Ingram’s Toyota Corolla to take his second rostrum in as many weekends, whilst Motorbase Performance’s Rory Butcher maintained a similar advantage to the manufacturer-backed Honda of Dan Cammish.

Halfords Yuasa Racing’s Cammish had tried to grab second in the early stages as he blasted around the outside of Hill and Turkington at the final hairpin. The downside of such an attempt is that the #27 Honda was left on the outside across the start/finish line and through the opening complex of corners, which saw Turkington, Hill, Ingram and Butcher all run line astern, eventually shuffling Cammish down to sixth.

Team-mate Matt Neal bounced back well from his big qualifying shunt to take seventh ahead of Team BMW’s Tom Oliphant, whilst Aiden Moffat’s ensured both Laser Tools Racing cars were inside the top nine.

Stephen Jelley was feisty throughout the contest – often fighting with the likes of BTC Racing’s Cook, Tom Chilton and the Mercedes of Adam Morgan – and the Team Parker Racing driver came out on top to complete the top ten positions.

There was one other significant moment on-track when the Audi of James Gornall made heavy contact with the Ford of Andy Neate ahead of him. Both cars crawled into retirement with a furious Neate seeking out his rival following the incident.

The Team HARD VW of Jack Goff failed to make the start after breaking down during the green flag lap.

Back at the front and it was Sutton reducing Turkington’s point leads to just 13 points with the lead duo getting ready to start together on the front row for the second contest 1330.

Ash Sutton said: “It’s good obviously to get the win here for Laser Tools Racing. It’s fantastic to convert that pole into a win. Colin was there but we just managed to hold that sensible gap that we required so he couldn’t get a move in.

“Obviously the initial plan was to just break clear and the opening lap was the perfect time to do that while everyone squabbles. But the Safety Car closed that down, so it was just a case of getting a clean restart, and then managing the gap from that point onwards. Obviously he applied a little bit of pressure into the hairpin a couple of times, but it was under control.

“We’re pretty much swapping weight now, so I don’t think it’s going to have a huge impact. It’s only 6kg more. I feel like we’ve always managed weight well. Me, as a driver, and the team in terms of engineering and setting it up, we’ve got a nice little package when it comes to ballast.  So I’m confident but it’s going to be a little harder.”

Colin Turkington said: “It’s nice to get race one up and running and a good result in the bag. My car had very good pace in that race, but Ash would stretch his legs in the middle sector and then I’d catch him at the end, so I was never really in a perfect position to mount an attack, but also it’s race one of the day so it’s not about throwing caution to the wind. It’s about tucking a result away and build through the day. Very happy, the BMW again is very good round Knockhill. I think we did a super job to get to P3 in qualifying yesterday so we’ve a great platform for the rest of the day.

“I was pushing all the time and  I could see the guys behind were scrapping so that’s why we edged away. I was keen to try and mount more of an attack but it’s difficult towards the end of the race when oversteer is building and the brake pedal is starting to feel a bit long. It’s very easy to be over ambitious. I did my usual thing and hopefully we can keep moving forward.

“It’s a swing; I lose 6kg and Ash to put on 6kg, that’s a 12kg swing. The level of this series, it’s so competitive that these details matter. 12kg can make the difference, I’m hoping it does.”

Jake Hill said: “It’s nice to actually get a hat and trophy and finish on the podium. It’s great. We always knew it would be an uphill battle – literally – against the rear-wheel drive cars. I think I did the best I could and we managed to bring it home in third which is great.

“Probably in race three I would say the front-wheel drive cars will come back. It’s going to be really hard to beat Colin and Ash in race two but if I can stay third again that would be brilliant, or at least in the top five. I feel like the car’s good, we lacked a little bit of traction in the second half of the race and Tom started to come at me a little but luckily enough I was good enough through the chicane to keep him at bay.”