THE BTCC DUEL OF KNOCKHILL 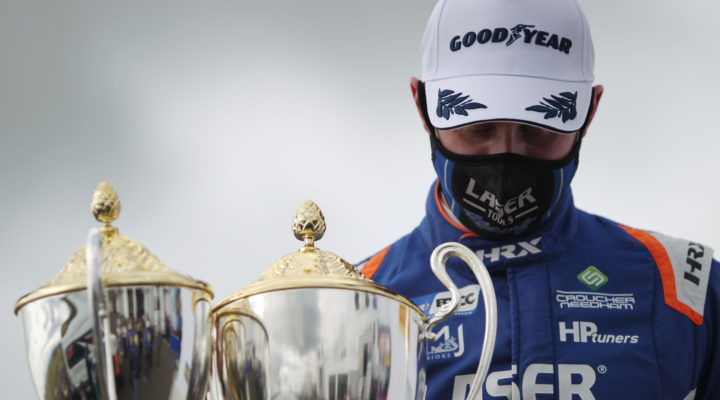 Sutton and Turkington battle it out before Butcher takes home win

It became a homeland hat-trick of sorts as Laser Tools Racing’s triumphs were followed by victory for Motorbase Performance’s Rory Butcher in the finale.

Sutton secured the first-ever pole position for the Infiniti Q50 on Saturday afternoon and then duly followed it up with a pair of lights-to-flag victories on Sunday, but both came under intense pressure from championship leader Turkington.

Turkington hounded Sutton in the opener after the former got the jump on front-row starter Jake Hill off the line.

The race bunched up when a safety car period was called for following a significant accident for BTC Racing’s Josh Cook at the chicane. Cook’s car wriggled through the notorious section of track, as he lost the rear-end of his Honda Civic Type R at high speed before crashing backwards into the barrier.

Turkington seemed to be the faster of the front two immediately after the restart, but realistically he was never close enough to make a significant move and the same could be said for the two pairs of challengers behind them.

MB Motorsport accelerated by Blue Square’s Hill held off Tom Ingram’s Toyota Corolla to take his second rostrum in as many weekends, whilst Motorbase Performance’s Butcher maintained a similar advantage to the manufacturer-backed Honda of Dan Cammish.

Sutton then doubled up with a similar performance in the second bout as he duelled it out with Turkington again. Top two in the race and now firmly top two in the championship, the younger challenger began reducing the overall points deficit to the record-equalling four-time champion.

Yet again, Sutton had Turkington breathing down his neck for the full 27-lap duration – this time with the BMW 3 Series the lighter of the two machines – but was still able to keep the #1 car at bay.

Sutton perfectly positioned his car at every possible turn, leaving Turkington with little opportunity of grabbing another BTCC victory, and it was the Infiniti man scoring his fourth win of the season with another impressive defensive drive.

The rivalry is nicely bubbling between them but it’s clear that there is a huge amount of respect between the two champions.

Toyota Gazoo Racing UK with Ginsters’ Ingram was also involved in the scrap for victory during the first half of race two, before he had to turn his attentions to defending from Halfords Yuasa Racing’s Cammish.

Their battle ultimately allowed the lead duo to scamper away, but Ingram was still delighted with a hard-earned podium finish.

The reverse-grid contest belonged to Butcher as the Scotsman scored a brilliant home win, dominating the race after getting the jump by pole-sitter Senna Proctor.

The rear-right wheel of Jackson’s Ford Focus was locked, which ultimately spun his #48 machine through the chicane and in front of the oncoming traffic. Bushell had nowhere to go – hitting Jackson’s Focus with some force – whilst Osborne side-swiped the Vauxhall Astra ahead of him while trying to take evasive action.

The unfortunate Bushell later confirmed that he had dislocated his shoulder as well as suffering ligament damage to his wrist, whilst all others involved emerged relatively unscathed.

Butcher – having originally blasted by Excelr8 Motorsport’s Proctor on the first getaway – had to do it all again on the restart, and that’s exactly what he did on the run down to turn one.

The 33-year-old never looked back and he pulled away to take a comfortable victory, albeit without a passionate home crowd present to add to his joy.

Proctor took a relatively lonely second ahead of a delighted Tom Chilton – the BTC Racing driver scoring the 101st podium of his racing career.

The contest concluded the run of four race weekends in just five weeks with the championship picture now beginning to take shape.

Turkington leads Sutton in the Drivers’ standings by ten points with Butcher 43 points off the championship summit.

Team BMW and the Bavarian marque dominates both the Teams’ and Manufacturers’ tables, whilst Sutton and Laser Tools Racing top both Independents’ orders.

Carl Boardley performed brilliantly at Knockhill, flying the Team HARD flag with two overall points finishes and the Jack Sears Trophy honours across the three races. The BMW 1 Series driver moves into second in the JST, 14 points behind Michael Crees.

Turkington is currently leading the Goodyear Wingfoot Award – based on qualifying results – from Butcher and Cammish.

The Kwik Fit British Touring Car Championship now enjoys a three-week break before resuming at Thruxton in Hampshire on 19/20 September.

Ash Sutton said: “I’m over the moon. I think I can honestly say this is the best ever touring car I’ve driven.

“It’s good to get the win here for Laser Tools Racing. It’s fantastic to convert that pole into a win. Colin was there but we just managed to hold that sensible gap that we required so he couldn’t get a move in.

“Colin put some huge pressure in at the start (of race two) and I was always having to look in my mirrors. I defended probably four or five times more than I did in race one, so it definitely shifted to his favour. He made one slight error 3/4 of the way through the race, which just gave me that margin again to bring it home.

“It’s still very early doors, it’s only the fourth meeting of the season, so there’s a long way to go yet. But this was my prime time to do that, this weekend, and we’ve done exactly that in races one and two.”

Colin Turkington said: “It was nice to get race one up and running and get a good result in the bag. My car had very good pace in that race, but Ash would stretch his legs in the middle sector and then I’d catch him at the end, so I was never really in a perfect position to mount an attack.

“[Race two] was very much like race one; the car’s evenly matched over the course of the run and I was at full tilt to try to stay with Ash and make a move, but he just has a bit more pace than us today. We went to other tracks where we’ve been stronger, but Ash has got it dialled maybe a bit better than us.

“We’re at Knockhill in August which tricks your mind. It makes you think we’re nearing the end of the season but in any other year we’re really only at Oulton Park, we’re only four weekends in. I’m keeping that at the forefront of my mind and conscious just to keep scoring really good points. We’ve got a long season ahead, we go until mid-November which is a long way away.”

Rory Butcher said: “I felt after Oulton, Josh [Cook] drove so well in that race and I got handed the win; I didn’t want to take my first victory in the new car in that way. So to do what we just did there on home ground has made up for it.

“I’m so pleased for the team. I’ve had quite a difficult day. I was really pleased with race one, making up one place and getting past Cammish was great, but in race two I wasn’t really proud of my performance there. I kind of overdrove and had to sit down after that and reset.

“I’ve been getting superb starts this year, doing a lot of studying into how to launch the car best and I was confident going into that race that I could lead going into turn one.

Penalties:
Race 1:
James Gornall was officially reprimanded, fined the sum of £500 and had his license endorsed by the addition of three penalty points for an incident involving Andy Neate

Race 2:
Bobby Thompson was excluded from the race result after his car failed post-race technical checks