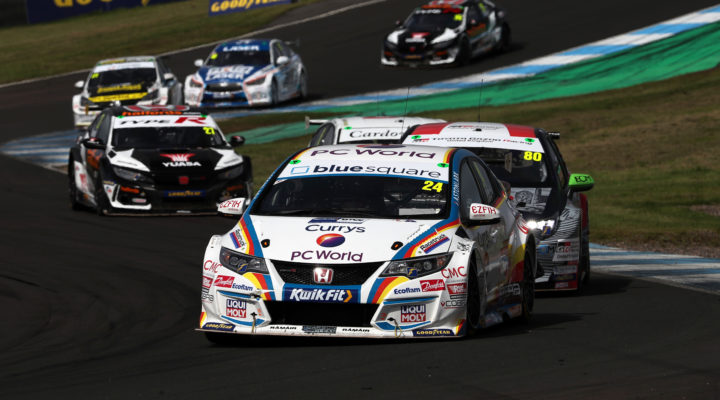 MB Motorsport accelerated by Blue Square driver Jake Hill had what he described as ‘probably my best BTCC weekend ever’ after firstly qualifying on the front-row of the grid, a mere 0.053 seconds away from Pole Position, then taking a second top-three finish in a row in race one, and adding much-needed points with two battling drives to P8 and P5 in the remaining two races.

“Of course winning here last year was so special, plus the other podiums I’ve had have been so important. What was so good about this weekend was the qualifying pace – I’ve now qualified in the top-seven in all four events, and in both race one and race three today the car was really strong.

“It’s no secret we’ve had ongoing technical issues – we had a misfire and a clutch problem on Saturday, and I know before we go to Thruxton the team will make a couple of major changes.

“I have to say the biggest ‘thank you’ to all of the guys on my car – from (team manager) Rob Ticker, to my engineer Craig Porley, and my amazing boys and girl on the car – Ben, Rob O, Dan, Micky P, Charlie and data Rob – they have worked their hearts out in this crazy five week period of four events. I love working with them and am looking forward to them having a smoother ride soon!”

Hill was expecting to lose a place to the always fast-starting BMW of championship leader Colin Turkington at the start of race one, but then began a race-long battle with Tom Ingram’s works-backed Toyota, the pair nose-to-tail for the full 27 laps, with a delighted Hill taking P3, and the honour of the first front-wheel drive car home.

“Tom was relentless. But I just had enough at key places, the car was strong in them and I did my bit too! That feels great!”

Race two and now with 48kgs of success ballast and a combination of the extra weight hampering acceleration, and some braking and tyre issues meant a battling P8, but still with more points and in the mix for the reverse grid draw.

Sure enough, Hill ended up P4 on the grid for the final race of the day, now with less ballast on board and some changes to the car.

A red flag early on for an incident involving Ollie Jackson, Mike Bushell and Jake’s team-mate Sam Osborne meant a delay to proceedings.

A slightly reduced race distance of 20 laps of the twisty 1.27 miles circuit saw a scrapping first couple of laps, with Oliphant getting a rapid start, and Tom Chilton edging past.

However a set of strong laps saw Hill pass Chris Smiley in a decisive move at Clark Curve, and then set about trying to catch the BMW ahead, and ultimately edging away from Dan Cammish in the latest ‘works’ Honda Civic Type-R to take a well-earned P5.

“The car was superb in that race. That’s meant that now we have scored solid points in the last six races – including those two podiums of course, and it’s moved us up to P7 in the Independents’ Championship and P9 overall.

“Thruxton is next and the car was on pole for both races there last year, so having come so close at Brands Hatch and Knockhill maybe I can nip pole there.

“Most importantly the car is quick, I’m loving driving it and despite the glitches we are now scoring solid points.

“It just proves in this championship… just never give up!”