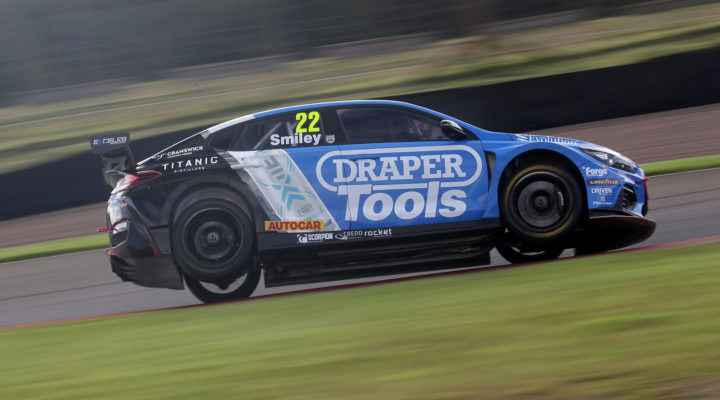 With its much-loved fast corners, Thruxton has long been a favourite within the Kwik Fit British Touring Car Championship. Built on the former RAF base of the same name, the Hampshire venue will once again welcome the stars of Britain’s premier motorsport series.

On the back of the squad’s podium last time out, Draper Tools, lead sponsor of the EXCELR8 Motorsport team will be eager to continue the momentum at its local venue.

Confident that more silverware could yet be on the table for the Hyundai i30 Fastback N Performance, EXCELR8 hit the ground running upon the car’s introduction at the start of the 2020 season. In the team’s second year in the series, the new car and support from the UK’s largest stock of professional tools has made it one of the most improved outfits in 2020.

Beginning the season with a bang, Chris Smiley was quick to prove the speed of the newly built powerhouse, recording EXCELR8’s maiden points-scoring finish. Further strides would be made before the end of the Donington Park weekend as Smiley lead the team to its first-ever podium, just rewards for the supporters who believed in the new project.

New drivers, engineering talent and quality sponsors have helped the shining blue Hyundai to become a consistent points-scorer, challenging many of the BTCC’s established racers.

After a short three-week break to recoup, the squad returns into the thick of the action, this time at the opposite end of the country.

“What a season it has been so far,” said Draper Tools’ Head of Marketing, Kev Smith. “Despite the challenges faced, it’s been fantastic to be part of the BTCC and we can’t wait to see EXCELR8 in action at our home circuit. Everyone at Draper Tools will be supporting them all the way!

“We’re always impressed by the team’s hard work and dedication – it’s been a great experience working with them this year and seeing such strong progress being made. We know the team is on top form and we’re very excited to see what the future holds.”

EXCELR8 Motorsport will be once again looking to produce a strong weekend and bag further silverware at Thruxton, as the squad aims to deliver a special result for local sponsor Draper Tools, based just 25 miles from the ‘UK’s fastest circuit’.

In celebration of the company’s home event, Draper Tools is giving fans the chance to win an awesome Track Day Kit, worth almost £800, with a Low Entry 2.25 Tone Trolley Jack, XP20 Brushless 1/2″ Impact Wrench and 149 Piece Socket & Bit Set up for grabs! Head to the official BTCC Facebook and Twitter posts to find out how to enter.