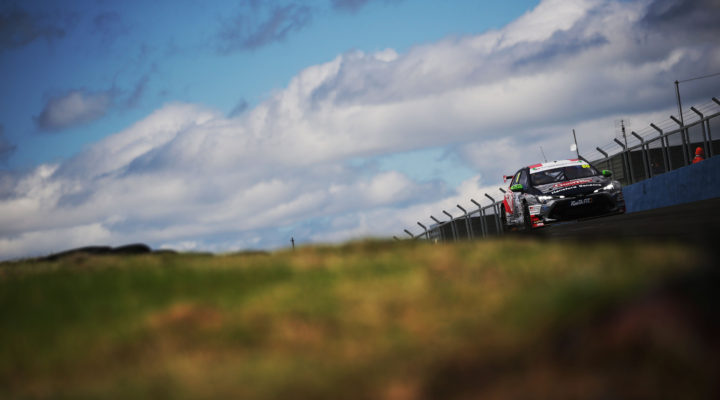 Tom Ingram is aiming to put the ‘spark’ into his season when the 2020 Kwik Fit British Touring Car Championship resumes at Thruxton this weekend (19/20 September), as the Toyota Gazoo Racing UK with Ginsters star targets the top step of the podium around the fastest circuit in the country.

Behind the wheel of his Speedworks Motorsport-run Toyota Corolla, Ingram already has two top-three finishes to his credit from the opening 12 races of the campaign – second place at Brands Hatch and third at Knockhill. Those results have kept him firmly in the fight, and he heads to Hampshire sitting sixth in the title standings amongst the 27 high-calibre protagonists in the UK’s premier motor racing series.

Not only that, but Thruxton has been a happy hunting ground for the 27-year-old Bucks-born ace in the past. In 2009, he sped to his maiden car racing rostrum there in the Ginetta Junior Championship, following that up with his breakthrough triumph a year later.

Since stepping up to the BTCC – commonly regarded as the world’s most fiercely-disputed tin-top series – Ingram has taken the chequered flag inside the points 17 times from 21 starts at Thruxton and made three visits to the podium.

Fresh off the back of a rostrum double in the GT Cup on his debut in Speedworks’ Toyota GR Supra GT4 sportscar last weekend, the two-time BTCC Independents’ Champion returns to the track with only one goal on his mind – victory. All of the doorhandle-to-doorhandle action will be broadcast live on ITV2 on Sunday (20 September), beginning at 1110.

“I think it’s fair to say we held our own at Knockhill last time out, and got as much as we could have expected from the weekend at what is inherently a rear-wheel drive track,” said Team Principal Christian Dick. “Moving forward, Thruxton is a completely different kind of circuit and challenge, and we go there in optimistic mood. It’s somewhere that we have traditionally performed well and where we have scored good results in the past.

“The break since Knockhill has allowed us to take a step back, reflect, reset and regroup and I think we go into the second half of the season in good shape. We’ve been really unlucky to have two DNFs that have put a bit of a dent in our title bid, but everybody has bad days in this championship and, on balance, the circuits still to come should suit us better than the ones we have been to so far.

“Thruxton is unique on the BTCC calendar; it’s tremendously fast and a real seat-of-the-pants, white-knuckle ride, and we’re very confident that the progress we’ve made with the Corolla over the last 12 months will stand us in good stead for a positive weekend.

“One aspect in which we’ve been particularly strong this season is tyre preservation, which is critical around Thruxton, and Tom has always been quick there, too. We know we need to perform a bit better on Saturdays to put the car further up the grid in qualifying and make our lives slightly easier in races one and two, but if we can do that, I have no doubt we can bring home some big points.”

“Once again, the most important part of the weekend will be Saturday,” said Ingram. “Fighting through the pack around such a fast circuit as Thruxton is definitely a balance of risk versus reward. We need to make sure we maximise qualifying this time, which we haven’t really done so far in 2020.

“We’ve seen already this season that the Corolla rides the bumps and kerbs better now, which is where we struggled at Thruxton last year – we were quick through the first two sectors of the lap, but Church and the final chicane were our Achilles’ heel. Brands Hatch and Knockhill suggested that we’ve turned a bit of a corner in that respect, though, so I feel more confident heading to Thruxton than in previous years.

“On a personal level, it’s a track I really enjoy, and we go from one unique circuit at Knockhill to another at Thruxton. You’re flat-out the whole way round the lap, and the car is completely on-the-edge – you do your belts up a little tighter when you venture out for qualifying there! It’s real knife-edge stuff, and a question of pushing hard enough to find the limit without overstepping it because if you make a mistake, you will pay for it.

“On the flipside, it rewards bravery and it will show who has a good chassis underneath them, which we certainly do, so I’m hopeful we can challenge at the front. The bottom line is that we need to sparkle. We’ve been missing that spark so far this season – although we’ve been there-or-thereabouts at every track, it just doesn’t feel like everything has quite come together yet. I want to go out there and win this weekend. It’s our time to shine.”