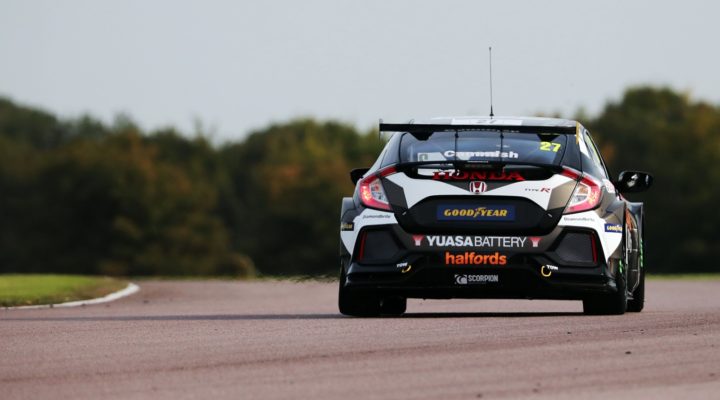 Jake Hill led the way for much of the session in his older MB Motorsport-run Honda, before the manufacturer-backed Fk8 of Cammish blitzed by with an impressive 1:15.327s lap in the latter stages of the 40-minute run.

With Cammish’s pace nearly two tenths faster than Sam Tordoff’s 2019 qualifying lap record, it looks as though the class of 2020 could be setting a new benchmark amid predicted perfect conditions in Hampshire later this afternoon.

“The weather’s lovely here today, fingers crossed it remains for the rest of the weekend,” said Cammish. “That’s why we do it: to enjoy a car we enjoy driving at a circuit you love, especially when the weather’s nice. It started well this morning. The Honda does traditionally go very well here, I think I had my best weekend of the year here last year at Thruxton ‘part two’ as it were. It started okay, the car seems to have picked up where it left off last year so fingers crossed we’re going to have a good weekend!

“Ultimately we haven’t been as fast as the BMWs and Sutton in the Infiniti for the first half of the season. But we weren’t as fast as the BMW in the first half last year either, and then we came good and started to have our weekends, so I’m hoping this is a turning point. I’m not saying we can get on top of them this year but if I can certainly win the battle of the best of the rest that’s what my aim is.”

BTC Racing’s Josh Cook edged out two champions in the shape of Colin Turkington (Team BMW) and Matt Neal (Halfords Yuasa Racing), whilst Tom Chilton confirmed the pace of the Hondas with ninth.

Honda machinery took five of the top nine positions, as the Japanese giant looks to continues its dominance at the fastest circuit in the country. The Civic took four of the six race wins of offer in Hampshire last season, whilst the marque has scored some 24 podiums here during the last five years – BMW being its closest challenger with ten.

Senna Proctor rounded out the top ten this morning in his Excelr8 Motorsport Hyundai, fresh from his recent podium at Knockhill last time out.