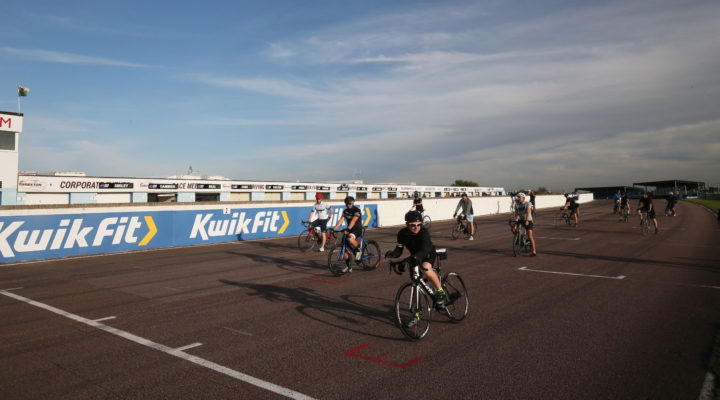 Tom Chilton claimed victory in the inaugural ‘Kwik Fit Thruxton 24’ bike ride at Thruxton on Friday evening (18 September) as a number of BTCC stars and personalities raised money for the NHS.

Originally designed by title sponsor Kwik Fit as an event in which fans could compete alongside BTCC drivers around the UK’s fastest circuit, the inaugural ride had to be amended due to the ongoing COVID-19 pandemic.

Rather than simply cancelling the event, however, the BTCC paddock pulled together to produce a fun-filled contest under a beautiful sunset in Hampshire.

Chilton was joined by the likes of Adam Morgan, Jade Edwards, Jack Butel, Carl Boardley and even Championship Coordinator Dan Mayo lined up for action, plus a number of other team members from the wider BTCC community.

With the Thruxton circuit registering nearly 2.4 miles per lap and another certain famous 24-hour race taking place in France this weekend, the idea of a 24-mile, ten-lap battle set the competitive juices flowing.

BTC Racing’s Chilton survived claims of illegality due to running on an e-bike and even a ‘track limits’ scare in true touring car fashion to storm clear to take victory from Mayo, whilst the podium was completed by Chilton’s friend Ian Gilland.

“That was brilliant,” enthused Chilton. “It was great fun and it was for a great cause, which is the most important thing.”

“Believe it or not that’s my first ever victory at Thruxton! It is the only BTCC circuit that I’ve never won at so I’m delighted, and hopefully now I can go on to do it for real over the weekend.

“Thanks to Kwik Fit for putting on a great event.”

“Congratulations to Kwik Fit and everyone that took part,” said BTCC Media Manager Simon Melluish. “It’s great for everyone to have some fun – even more so during this challenging year – but to do so for a great cause like the NHS made this inaugural ride extremely special.

“We are missing the BTCC fans hugely this year, but sometimes it is good to remind ourselves of the wider picture at this difficult time, and we would like to thank the fantastic NHS staff for everything they are doing.

“This inaugural ‘Kwik Fit Thruxton 24’ has simply whet the appetite to do it again next year and we hope to invite some our loyal fans to join the race next time.”

Rounds 13, 14 and 15 of the 2020 Kwik Fit British Touring Car Championship take place at Thruxton this weekend.