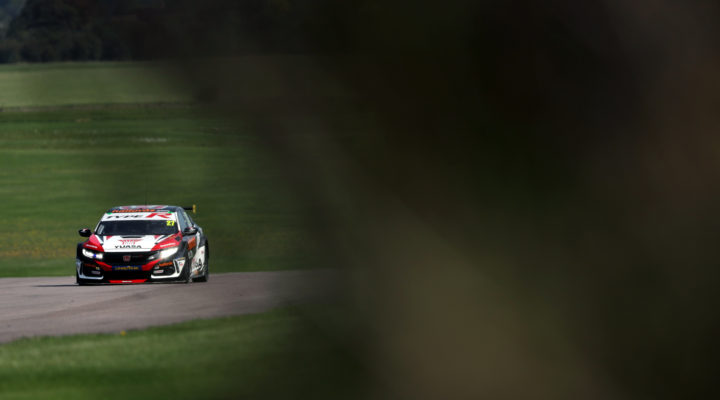 Honda has often been the dominant force around the UK’s fastest track and Cammish duly delivered at the marque’s home circuit, as he followed up his practice performances with a late 1:15.201s lap time during the all-important qualifying session. The Yorkshireman had pushed too hard on his maiden qualifying run – eventually aborting his first attempt – subsequently piling on yet more pressure ahead of his final fling around the 2.36-mile circuit.

Toyota Gazoo Racing UK with Ginsters’ Tom Ingram then looked to have grabbed the opportunity presented to him as he set the fastest overall first and second sectors, before a wild moment in the closing stages of the lap may have ultimately decided his fate. The talented Toyota racer ran wide on the exit of Church – the fastest and arguably bravest corner in the country – with almost all four wheels of the Corolla coming off track. Incredibly, Ingram kept his foot in and still topped the timesheets as he crossed the line, but Cammish would eventually move to the summit on his final run.

Matt Neal backed-up the prowess of the Honda Civic Type R as the three-time BTCC champion ended up third, whilst Adam Morgan left it extremely late to grab fourth in the Carlube TripleR Racing with Mac Tools Mercedes – both drivers having been towards the sharp end throughout the day.

MB Motorsport accelerated by Blue Square’s Jake Hill was fifth, whilst Rory Butcher kept his championship challenge on-track with a top-six result. The Motorbase Performance Ford Focus has not been as near to the ultimate pace as the team would have arguably expected, but the Scotsman ensured he would be in the fight at the front come race day.

As ever, among his rivals, was the consistent championship leader of Colin Turkington, who had to settle for eighth in this particular session. The result represented the lowest grid position for the Team BMW star so far this season, but with maximum success ballast onboard his 3 Series, the Northern Irishman can still be hopeful for a promising Sunday.

Rounds 13, 14 and 15 of the 2020 Kwik Fit British Touring Car Championship take place at Thruxton tomorrow with the action being screened live and exclusively on ITV2 from 1110.

Dan Cammish said: “I was strong in the first two sessions, which is a funny one because you go into it thinking this is yours to lose. And I tried to lose it didn’t I. I pretty much ruined that first set with too much enthusiasm, not enough talent. But I recovered it and I’m really happy with a pole lap in the end. Team Dynamics has done a great job. We are strong here, the Honda in general as a package. But we’ve worked at it and developed it and improved it incrementally every year we’ve had the FK8, and that’s the result. On a circuit it suits with the drivers turned up to 11, we can deliver a really good lap. It’s nice to have a qualifying lap record, and to not be a bridesmaid. I seem to always qualify second most of the time, so it’s nice to just take that one more. But that was only part of the battle. The real fun starts tomorrow. First pole position of the year and second of my career, I’m very, very happy.”

Tom Ingram said: “That lap was all out, and maybe a little more! That was genuinely quite scary, my hands have gone white now from gripping onto the steering wheel that hard through there. But we made a load of changes between FP1 and FP2 and the car felt magnificent, so I am really, really happy with that. That’s the quickest we’ve been around Thruxton by a country mile, probably by a second. That’s 12 months of development under our belts, and it goes to show that we’ve made some big improvements. When Dan did his time in FP1 and FP2, I thought ‘that’s quick, that’s going to be tough to beat’. But nearly… very, very nearly. It’s always close around here but full credit to Dan, he has the biggest talent bag of the day! Fingers crossed this sets things up quite nicely.”

Matt Neal said: “I love qualifying here but I hate it too. It’s so on the edge, and so hanging on. In FP1, Dan and Tom were straight on it. But a man of my age, I’ve got to build myself up to it! We were both nervous before we went out. But fair play to the BARC, every year we come back they make circuit improvements. They’ve done a great load of work outside of Church. The circuit’s looking well. I was resigned that I was going to be behind Dan, then I ended up in first and thought ‘I’ve got a chance here’ and Tom [Ingram] beat me. I’ve never been so chuffed to be pipped off the front row as when Dan did it and gave us a Halfords Yuasa Racing car on the front. The BTCC’s so close now, it’s all about qualifying so at least we’re starting at the right end. But Thruxton is one of those places where you can overtake. You’ve just got to keep it tight and make sure you get a good start, because the BMWs will be somewhere alongside us I’m sure by the first complex.”