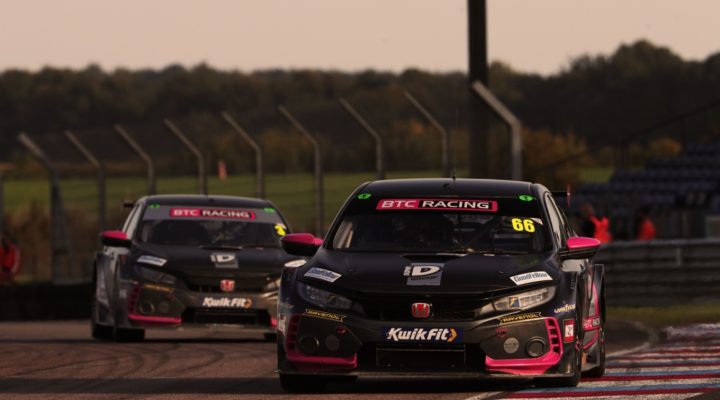 Josh Cook headed home team-mate Tom Chilton to score a memorable one-two for BTC Racing, as the former continued his run of scoring a BTCC victory in each of his last four visits to Thruxton.

The two Honda Civic Type Rs held station for the entire duration, with Cook able to keep Chilton at arm’s length throughout, whilst the main squabble commenced for the final podium position.

The victory represented a huge relief for Cook as the Bath racer has endured a hugely unfortunate start to his BTCC campaign. A victory on-the-road at Oulton Park was later removed after his car failed a ride height check and that was followed by one of the biggest accidents of his career at Knockhill last time out, so this success may have proved more rewarding than others.

“I’ve never been so relieved,” said Cook. “It probably didn’t look anything from the outside but I was clinging onto that, it was qualifying laps every lap, just needing to bring it home. The guys and girls at BTC Racing deserve it. It’s been a tough few weeks and a tough weekend, but to come home with a win especially after what happened at Oulton Park is just mega.

“We took a big step forward with the car in race two. I don’t think we’ve got to the bottom of the issues in race one yet but the team’s worked tirelessly. We really, really needed a good result. Morale’s been down a little bit because we’ve just had struggle after struggle so far, but I’m just so chuffed for the whole team.

“My number one, Dom, has worked absolutely flat out to get the car ready for this weekend, and during the weekend. Credit to the whole team and I’m just so glad we’ve finished with a 1-2 for BTC Racing.

“You’ve got to roll with the punches in the BTCC. We’ve just approached every weekend the same, just a fresh start, and we’ll do the same at Silverstone. We’re just going for the glory. We’ll have elbows out and just try and get more of what we’ve just had.”

Motorbase Performance’s Rory Butcher completed the podium position after he managed – just – to hold both Ash Sutton and Tom Ingram back. The battle intensified as the contest edged towards a thrilling climax as Laser Tools Racing’s Sutton went around the outside of Butcher at the Complex. Sutton was barely able to stop his #116 Inifiniti Q50 and Toyota Gazoo Racing UK with Ginsters’ Ingram immediately eyed his opportunity. The pair came close to touching and when the dust settled the positions remained unchanged as the trio made their way to the chequered flag.

Team BMW’s Tom Oliphant rounded off a solid day with sixth, whilst BTCC legends Matt Neal and Colin Turkington were next in the order.

Neal and Turkington were joined by the third BTC Racing-run Honda of Michael Crees for much of the race, and the latter showed absolutely startling pace against his more illustrious rivals. Crees – in his sophomore BTCC season – was seemingly comfortable ahead of Turkington and quicker than Neal as he looked for a way, but disaster struck on the final lap as a puncture sent him tumblings towards the back of the order.

Jake Hill (MB Motorsport accelerated by Blue Square) and Dan Cammish (Halfords Yuasa Racing) completed the top ten positions, the latter having to recover from yet another slow start.