TWO OUT OF TWO FOR TOYOTA’S TOM INGRAM 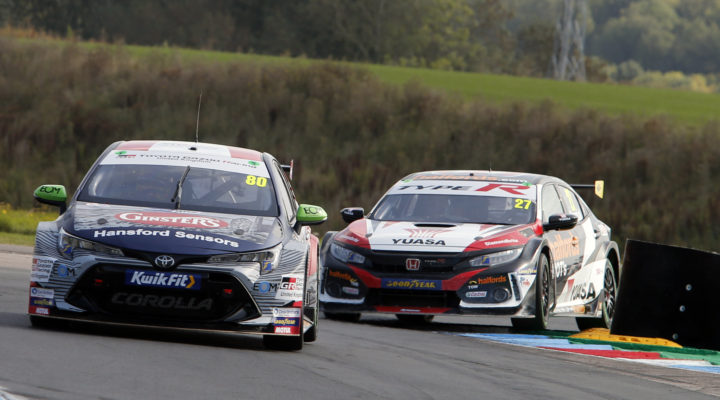 Tom Ingram is proving a tough nut to crack at Thruxton as the Toyota star withstood intense pressure for the second successive race to take a win double in the Kwik Fit British Touring Car Championship.

Having got the jump by pole-sitter Dan Cammish in the opening contest, Ingram had no cars to pass this time around but he did have to contend with maximum success ballast onboard his Toyota Corolla.

Ingram made a similarly impressive start while Cammish dropped behind Halfords Yuasa Racing team-mate Matt Neal and had to forcefully hold off the charging Infiniti Q50 of Ash Sutton.

Critically, Cammish kept Laser Tools Racing man Sutton at bay and Neal seemed to let his stablemate back past into second shortly after as the works Honda squad worked together for the championship cause.

The Honda Civic Type R of Cammish reeled in Toyota Gazoo Racing UK with Ginsters’ Ingram pretty rapidly but passing the race one winner proved an entirely different challenge. As per the opening bout the Toyota Corolla was the pace-setter in the opening segments of the 2.36-mile lap, whilst the #27 Honda had the upper-hand towards the end of each tour. The pair produced a classy high calibre joust throughout but the positions remained unchanged until the finish.

“I’m well chuffed,” said Ingram. “If I’m being honest, I didn’t expect to be coming into this weekend getting two wins. I wanted a podium and I wanted to be up there, but I didn’t think I’d get two wins. So full credit to the guys and girls at Toyota Gazoo Racing UK with Ginsters. We’ve put a hell of a package together this weekend and it feels very exciting.

“It was just as tough as race one, other than the tyres were dropping off even more because of the extra weight we’re carrying. It was tricky, Dan was looking left, right and centre. Slow speed stuff we were starting to struggle towards the end. I was locking fronts; I was locking rears; I was locking my hands firmly onto the steering wheel.

“It was a great result and a great weekend for Toyota Gazoo worldwide with the Le Mans win, the WRC win in Argentina and two wins here in the BTCC, it’s been a hell of a day.”

“We made some changes and for sure they were the right way to go,” responded Cammish. “But another terrible start – I’m really having a bad day when it comes to starts – third time’s a charm though and I’ve got another chance at it.

“To be honest he’s too much for us. He’s got too much traction and I can’t make a difference in the slow stuff. When we get to the quicker stuff I’m there. By the end of the straight I’m catching him, but it’s only ever catching, it’s not really passing.

“It was a tough one, we both gave it everything and I could see where Tom was on the track again like race one. He’s hanging it out everywhere and at times I saw the grass coming up far too quickly for my liking as well. But there’s nothing left in the tank for either of us. Two second places is a great day. Any other place I’d be saying fantastic, but obviously having pole and not having quite converted it yet is quite disappointing.

“They say it’s a Honda circuit, but you can’t say the Toyota isn’t very fast as well. Let’s regroup for the next one. I’m hoping we can make the best of it, come through from wherever we’re going to start and round out some really good points.”

Matt Neal ensured the race two podium would be identical to the first as the three-time champion held Sutton back to complete the rostrum, although the latter will be buoyed as he extended his lead in the overall standings.

Rory Butcher maintained his championship challenge with fifth in the Motorbase Performance Ford Focus, as did Team BMW’s Tom Oliphant with sixth.

BTC Racing team boss Bert Taylor would have had his heart in his mouth for almost the entire 16-laps as his trio of drivers proved inseparable. It was a vital battle too as Tom Chilton headed stablemates Josh Cook and Michael Crees home. There was more joy for the squad when the number #8 was pulled at random for the reverse grid draw meaning Cook and Chilton will start on the front row for the finale later today.

Team BMW’s Colin Turkington scored three points with a 13th place finish as he made his way up from the back of the grid following his earlier problems in the first race.

Round 15 of the 2020 Kwik Fit British Touring Car Championship takes places at 1725 and will be live on ITV2.