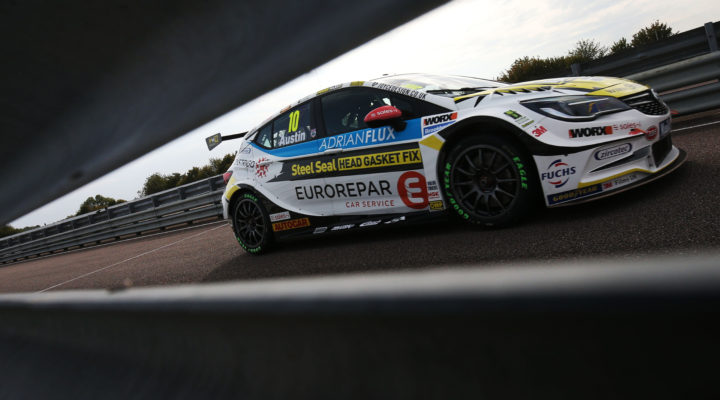 Traffic in Saturday’s qualifying session meant Austin was unable to string a perfect lap together although, despite having just two sessions in the car and the full new driver ballast on board, he recorded the 16th fastest time, resulting in the Vauxhall Astra being well placed to make up ground on Sunday.

The opening encounter saw Austin make a great start, gaining three places during the first few laps to get up to 13th. He would hold this position for the majority of the 16-lap session, taking Smiley at the very end of the final lap to snatch 12th.

This meant the 39-year-old would start race two 12th on the grid, but with the advantage of carrying zero success ballast. Despite fighting hard and putting in some quick times, he was unable to make up any places, whilst not losing any ground either, crossing the line once again in P12.

With the #10 car making it into the now infamous BTCC Reverse Grid Draw, hopes for a pole position start for race three were cruelly dashed as it was revealed that Austin would begin the final race of the day yet again from 12th on the grid.

A battling race three drive would see Austin pushing championship contender Cammish in his factory-supported Honda until the very end, crossing the line just 0.7s behind to finish 11th.

“We’ve not had the best of luck this year,” said Team Principal Adam Weaver. “Despite the car being consistently one of the quickest on track, we had no results to show for it going into Thruxton.

“When we realised that Mike Bushell wasn’t going to be able to race, I was a bit nervous if I’m honest, but as soon as we agreed Rob getting into the car I knew we were onto a winner. I couldn’t be happier with our results from the weekend. Rob showed great pace throughout and slotted into the team perfectly.

“Despite being six races down on the rest of the grid, as well as bad luck preventing any points at the previous six, we’re not at the bottom of the points table, which shows that as much as we’re not going to be fighting for the title this season. We’re definitely not there just to make up the numbers.”

“I enjoyed my weekend more than I was expecting, to be honest,” reflected Austin. “PMR is a great team, and you don’t need me to tell you that they have built a great BTCC car in the Astra – it’s already well-proven.

“No matter how good the car is, coming back at Thruxton with zero testing, new driver ballast on board and in a new car was always going to be a challenge after two years out of the seat. But I feel I got up to speed as well as I could, thanks to the support of some great people in the team. Having said that, I think if I hear the word ‘solid’ again my head might explode!”

PMR continues its unique approach to the 2020 season this coming weekend, as Jade Edwards is set to become the first female in 13 years to contest the BTCC, on Silverstone’s National Circuit. Fans will be able to watch race day unfold this Sunday from 1100, on ITV2 & ITV2HD.