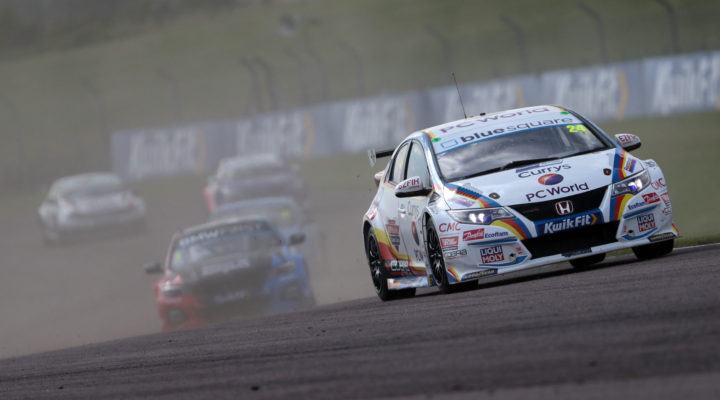 MB Motorsport accelerated by Blue Square battled back from a difficult start to the day, securing another top-ten finish during the fifth event of the 2020 Kwik Fit British Touring Car Championship visited Thruxton last weekend, as the squad now heads to Silverstone with the aim to push for more points.

The team looked to build on podium finishes in the previous two events at Oulton Park and Knockhill as it headed to the Hampshire circuit, and a strong Saturday saw Jake Hill put his Honda Civic Type R in fifth place on the grid for the opening race of the weekend.

Team-mate Sam Osborne in the sister Honda meanwhile would line up 23rd on the grid, with his focus on fighting his way forwards and into the points on race day.

The opening race started well for the team as Hill was able to maintain his starting position, despite contact at turn one. Hill would hold his position through the early laps before damage from the earlier contact forced him into the pits and dropped him off the lead lap. Showing front-running pace on his return the circuit, he was left with a 22nd place finish.

Osborne stayed out of trouble in the early stages of the race before setting about trying to work his way forward into the top 20. The 27-year-old had climbed up to 19th spot before an unfortunate spin at Noble dropped him down the order. Forced to make a precautionary pit stop, Osborne rejoined three laps down, which meant he would be unclassified in the end results.

The pair would start together on the twelfth row of the grid for race two but Hill was soon making up places when the action got underway, breaking into the top 20 by the end of lap one.

Into the points by lap four having made up seven places, Hill would set the quickest lap amongst the Independent drivers as he charged through to eleventh place; missing out on the top ten by less than half a second. Osborne would lap consistently in the sister car before taking the chequered flag in 22nd spot.

Having missed out on the reverse grid draw for the final race, Hill’s focus was on trying to push forwards into the top ten, and he capped a challenging race day with a ninth-place finish, lapping as quick as the leading pack despite running in traffic throughout.

Osborne would again finish up in 22nd spot, with the team now heading for Silverstone this weekend for the sixth event of the season.

“We’ve shown that we have the pace to run with the front pack again this weekend but unfortunately things didn’t fall our way on race day,” said Team Principal Shaun Hollamby. “The margins are so fine in the BTCC and on another day, the contact Jake had in race one wouldn’t have had an impact and he’d have been able to finish near the front and collect three strong points finishes.

“It’s been tough for Sam but we have to remember that he is only in his second season and is still learning every time he goes out on track, so I have no doubt he’ll come back stronger at Silverstone next week.”

“To come back through to take a top ten finish is a good end to race day for Jake and showed the pace that we have in the car,” added Sporting Director Mark Blundell. “It’s just a shame that we weren’t able to push for a podium finish as I think that was certainly achievable had race one gone to plan. It’s been more of a challenge for Sam but he has shown elsewhere what he can do and I’m confident he’ll soon be challenging for more points to add to his tally.”

“We didn’t get the results I think we deserved today, but it’s still been my best Thruxton weekend in terms of how I’ve driven,” reflected Hill. “It’s a shame with what happened in race one but, we did well in race two to make up a lot of places and had a clean run in race three. This has still been a solid showing for us and the car hasn’t missed a beat.

“We’ve lost a little bit of success ballast as a result of this weekend which will be a bonus heading to Silverstone and I think we’ll be quick there and can push for some strong results.”

“It’s been a tough weekend for me and I would have liked to do better,” admitted Osborne. “But I just have to pick myself up and look to come back stronger next weekend. I haven’t done as many laps here as I have done elsewhere, and it’s such a tricky track to master but motorsport is full of highs and lows, and this happened to be a low. There is only a week until Silverstone which means I won’t dwell on this weekend for too long and will hope to push for points next time out.”