TEAM BMW FOCUSSED ON COMING BACK STRONGER AT SILVERSTONE 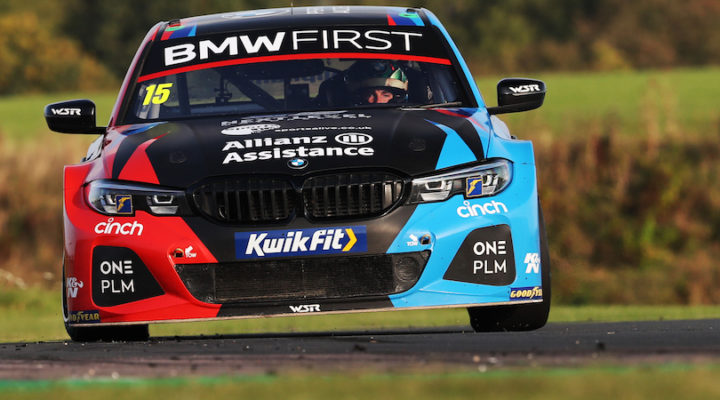 Team BMW had a mixed weekend at Thruxton, with Tom Oliphant celebrating a trio of top-eight finishes while reigning champion Colin Turkington lost the standings lead, as the squad concentrates on coming back stronger for this weekend’s rounds of the Kwik Fit British Touring Car Championship at Silverstone (26/27 September).

After a busy start to the 2020 campaign and following the longest break of the season so far, the outfit headed to the fastest circuit in the UK with the aim of building on its impressive run of results to date.

Despite the high-speed Hampshire venue traditionally being better suited to front-wheel-drive cars, the pair of BMW 330i M Sports showed encouraging pace across Saturday’s two free practice sessions and headed into qualifying with a quiet confidence.

In what proved to be an ultra-competitive session, Oliphant extracted the pace from his rear-wheel-drive machine to set the 12th best time setting him up for a strong race day. Turkington’s best efforts would see him eighth on the grid for Sunday’s opening encounter, despite the 60kg of success ballast onboard the #1 machine.

Launching off the sixth row of the grid, Oliphant wasted no time in moving forward as he muscled his way into the top ten during the early stages of the first race and then settled into a groove. Moving up two more spots to eighth in the remaining laps, the 30-year-old bagged a handy haul of points to aid his lofty championship position.

It was a significantly different start to the day for Turkington, as a misfire saw him forced to pit on lap six, resulting in a first non-classified finish of the year for the Northern Irishman.

Carrying less weight in race two, Oliphant was once again on the move as he kept his nose clean and progressed to sixth come the chequered flag.

Team-mate Turkington spent the second race of the day moving his way through the pack. Having started in P24 with no ballast, he would cross the line in 13th, narrowly missing out on any benefit from the reverse grid draw for race three.

Starting third on the grid – virtue of the reverse grid draw – it was another sixth-place finish for Oliphant, capping off a solid day at the office.

As the lights went out, Oliphant found his path to split the front row cut off as the field streamed through Allard and, as he fought for track position around the opening sequence of corners, he was shuffled back to fourth.

Dropping back to sixth a handful of laps later, Oliphant would hold station for the remainder of the race to continue his record of being one of only two drivers on the grid to finish in the points in every race so far this season.

The final encounter saw Turkington once again make his way through the order. Beginning race three from 13th on the grid, the 38-year-old would make up a further five places to take eighth at the chequered flag, bagging a much-needed points haul.

Team BMW heads into the second half of the 2020 campaign in a strong position, with both drivers in the top ten of the overall standings. Additionally, the squad also leads the Teams’ and Manufacturers’ tables heading into the next rounds at Silverstone this weekend (26/27 September).

“Considering that we qualified outside the top ten on Saturday we can’t be too disappointed with three top eight finishes and a solid haul of points,” reflected Oliphant. “Especially as the characteristics of the circuit didn’t suit our car as much as other tracks we visit.

“After qualifying I had it in my head that we needed to play the long game on Sunday. Moving forward in races one and two was important as it put me into the hat for the reverse grid draw, and that ultimately was kind as it placed me in third.

“I had a good launch but in the second phase I was swallowed up by the front-wheel-drive cars. Had that not happened I think we would have had the pace to challenge for a podium. Overall, we have made the best of the weekend and we’ll focus on coming back stronger at Silverstone.”

“It’s always so important to finish race one; your entire day evolves from that result,” admitted Turkington. “When something happens then, it derails the weekend. Thruxton is a difficult circuit to overtake, and you have to force errors to make progress. It also tends to favour the FWD cars, so I was really up against it. You’re hoping to move forwards and maybe luck into the reversed grid for the final race, but it just wasn’t meant to be.

“It was critical for me to stop hemorrhaging points and I had to pull out all the stops. I’d have liked to make more progress to be honest, but when we took the weight out for race two, things didn’t come together as well as we would have liked. But all in all we should be proud of having gone forwards because it was clear to see doing that wasn’t easy to achieve. The team kept their spirit and kept on digging deep throughout the day. And on the tough days, that is never more important.

“You always expect a bump or two on the journey and this was one of them. These things happen and nobody is to blame. We just have to take it on the chin, dust ourselves down and go again. It’s frustrating when you put so much work into an event and you come away with little reward, but that work never goes to waste. We’ll move on, keep grafting and put it right next time out.”