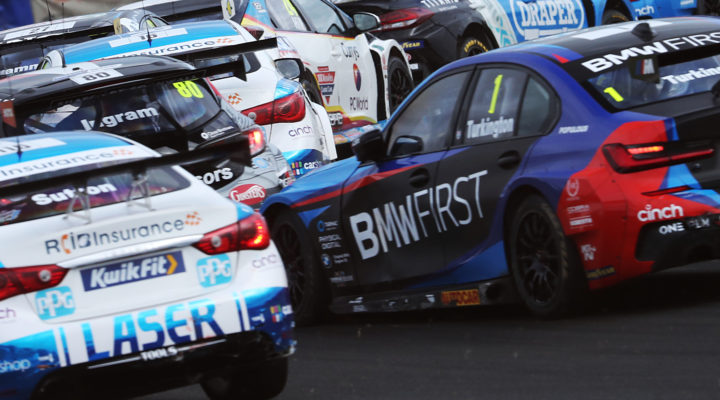 Ash Sutton moved to the summit of the Kwik Fit British Touring Car Championship standings at Thruxton last time out and now the young charger is aiming to stay there as the series rolls into Silverstone this weekend.

“Heading to Thruxton we knew it wasn’t going to be our strongest track, so to come away with three top five finishes and the lead in the points was fantastic,” said the Laser Tools Racing star.

“We had a bit of luck with Colin [Turkington] having his issue in race one, but we maximised everything that we could to basically get a 26-point swing in the championship.

“Going to Silverstone with maximum success ballast won’t be ideal but we have the points in the bag and also I think the car will be a little better suited there.”

As mentioned, Sutton benefitted from a difficult weekend for reigning champion Turkington, as the Team BMW star failed to score for the first time this season following a mechanical issue in the opening race.

He charged back through the order in the other contests to claw back some points, but the Northern Irishman is now playing catch up with 12 of the 27 races remaining.

“When race day doesn’t quite go to plan you find you’re chomping at the bit to get back out there,” said Turkington. “Of course I didn’t score the points I would have liked at Thruxton, but we made good progress back through the pack.

“Finishing the weekend in a good place with a forwards mentality is a big positive.  We’re here to win and a bump in the road only increases the motivation for me.”

Silverstone feels like the beginning of the business end of the season with the likes of Tom Ingram, Rory Butcher and Dan Cammish also harbouring intentions of winning the most coveted crown in British Motorsport.

The 1.64-mile National circuit often proves to be one of the closest of the season. It is also synonymous with slipstreaming so it’s likely there will be action aplenty this weekend as we head towards an exciting climax of the 2020 Kwik Fit British Touring Car Championship.

“The nature of the national circuit allows for plenty of overtaking so I’m sure it will be BTCC business as usual!” concluded Turkington.

Qualifying commences at 1510 with all the action being streamed live via www.itv.com/btcc, with the entire race day being broadcast live on ITV2 from 1100 tomorrow.