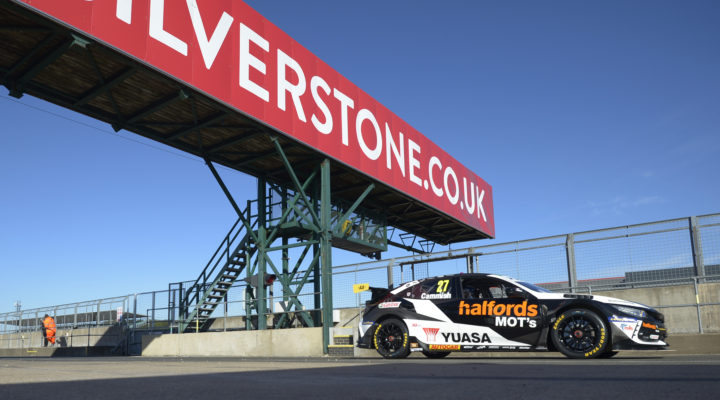 Honda star leads the way during BTCC qualifying at Silverstone

An enthralling session at the Home of British Motor Racing – interrupted by a red flag stoppage as well as a light rain shower – often swung one way and then the other, but Cammish eventually proved to be the class of the field with the most commanding qualifying display of the season so far.

Tom Ingram and Rory Butcher expressed delight to have set the second and third quickest lap times respectively, after both talented racers struggled down the order during the early running.

Toyota Gazoo Racing UK with Ginsters’ Ingram left it until the final moments as he hauled his Corolla around the 1.64-mile circuit to complete the front row order. The Bucks ace has taken five victories in the previous four visits to Silverstone – the best results of any driver on the current BTCC grid – so is sure to be a serious contender come race day.

The Motorbase Performance Ford Focus of Butcher failed to find front-running pace earlier in the day, but the #6 machine also came alive in the closing stages, and now the Scotsman is well placed as he looks to keep his championship ambitions alive.

Team BMW can be equally proud of its efforts as Colin Turkington and Tom Oliphant ended up fourth and fifth on the timesheets. Both Oliphant and Turkington took turns to tow each other during the 30-minute session and they duly delivered in what could have been a tricky afternoon for the 3 Series drivers.

Matt Neal made it a top six celebration for Halfords Yuasa Racing as the veteran continued his good run in the Honda Civic Type R.

Championship leader Ash Sutton looked to have been caught out by the rain during the opening exchanges as he languished outside the top ten in the Laser Tools Racing Infiniti Q50. Thankfully, track conditions improved towards the end and the fully focussed Sutton grabbed seventh – hugely important considering his main championship rivals fill the top five positions.

Adam Morgan has consistently produced the goods in his Carlube TripleR Racing with Mac Tools Mercedes, and did so again to slot into eighth, with the intention of moving further forwards on Sunday.

Tom Chilton was the highest placed BTC Racing car in ninth, whilst Jake Hill continued his run of qualifying inside the top ten at every event this season.

The session was stopped briefly in the first few minutes when two rookies – Jack Butel and James Gornall – made contact while trying to warm their tyres, the latter having to abandon his Audi S3 with damage to the front-right of his car. Mercedes man Butel was given a seven place grid penalty post-session for his part in the incident and will subsequently start 27th on the grid.

Cammish extended his advantage in the Goodyear Wingfoot Award, which is presented to the highest qualifier throughout the season. The session itself proved ultra-competitive with the top 24 cars incredibly separated by less than a second.

Rounds 16, 17 and 18 of the 2020 Kwik Fit British Touring Car Championship take place at Silverstone tomorrow, with all the action being broadcast live on ITV2 from 1100.

Dan Cammish said: “I don’t really know where that came from. I expected to do a similar lap to FP2 on the better tyre, but the weather was a bit up and down and there were certainly spots of rain. I just stuck at it and kept going on my second set and the lap sort of appeared. The thing with here is there’s so much traffic and you never know when you’re going to get your moment. I managed to put it together and there it was.

“I still think that there’s something better but it’s just so difficult to get out; one lap you’re too far over the limit one way, too far under the limit the next. The thing with Silverstone – and it’s similar to Brands Hatch Indy – you’re looking for hundredths all the time and that’s the difference. So it’s a bit of a bigger margin than I was expecting, but a pleasing one!

“I’ve made some great starts in the BTCC and some bad ones: at Thruxton, they were bad ones. Ultimately that’s down to me, I made a bit of a fluff and Tom [Ingram] did a great job on his start. But I don’t want to be hung up on it or think there’s any problem. Clean slate and give it a go tomorrow! I copied Tom and got myself a Batak machine so hopefully that was the little thing I was missing.”

Tom Ingram said: “I left it far too late for my liking! If I’m honest, it felt like we were slightly struggling throughout that session and it just seemed to take too long to get into the sweet spot of the car. Throughout FP1 and FP2 the car felt really good and maybe we should have changed a little bit more going into qualifying. It just felt a little too safe for my liking. It wasn’t Thruxton-esque enough – which is unfortunately how I quite like the car to be set up, especially around here!

“We’ve all done it – you’ve got to try your luck! You’ve got to push your boundaries and make sure you get the most out of it. Obviously, for one of my laps I was over track limits so they had to take that one off me, which did put a little pressure on towards the end and I was mindful that I’ve got a quick car and I’ve got to extract the very most from it. Even on new tyres it’s still lacking a little bit, but I think we’ll be in good shape tomorrow. We’ve got a very good race car, we’re going to get a good run and get away!

“It really is encouraging, we’ve had a win here every year since 2016. Last year we had two wins. It’s a circuit that’s served us very well over the years and hopefully that will continue into tomorrow and we can keep that record going and try to claw the points back against Ash and Colin. That’s really the goal tomorrow, to claw some points back on those guys.”

Rory Butcher said: “That was tough. I can’t help but say how happy we were to get on the front row, and obviously getting pipped by Tom at the end was disappointing. But to be up with these guys is fantastic because in practice we just didn’t seem to be showing that outright speed. It came together in quali.

“We’d been changing the car all day and even made a change mid-session; just before that final run we had a little tweak to the front of the car and it gave me confidence through the first turn. It puts us in a good position for tomorrow. The points are so close up there at the top and we need to keep punching hard against these guys.

“I think there’s podiums to be had. We’ve got to race hard, but we’ve got to make sure that we keep up the points on the board. I think Dan looks like he’s got a hell of a lot of pace there. It would be interesting to see his lap and how big a tow he got. But the two ahead are super quick and I’ve got Colin behind me. It’s going to be a hard fight but we’re aiming for podiums and to maximise points.”

*received a seven place grid penalty following an incident during qualifying resulting in a red flag.