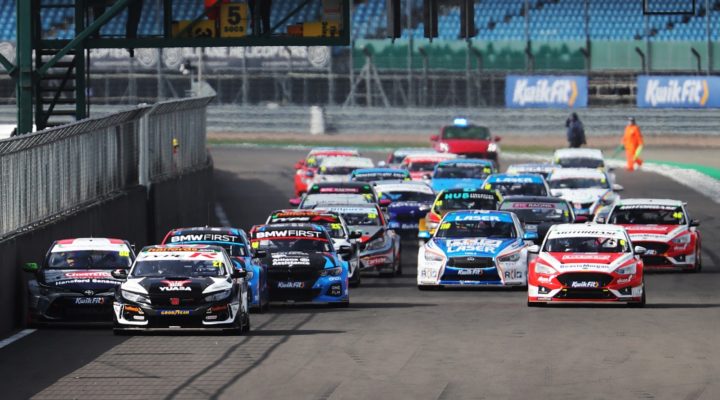 Dan Cammish finally converted pole position into victory in the opening Kwik Fit British Touring Car Championship race at Silverstone, but it wasn’t without a huge scare as he took on his Thruxton nemesis Tom Ingram.

The top five drivers in the standings occupied the top five finishing places in this particular bout as the leading quintet produced a high-class contest, and with the dust still settling here at the Home of British Motor Racing, just 30 points separate them all in the race for the title.

Halfords Yuasa Racing’s Cammish held P1 off the line – something he struggled with in Hampshire last weekend – but he couldn’t hang on for long as he and Toyota star Ingram swapped places twice on the opening tour.

Cammish critically nipped back by before the end of the first lap and he would resist an even bigger challenge on lap five.

The BTC Racing-run Honda of Michael Crees and James Gornall’s Audi S3 made contact, bringing out the safety car, but the boys up front were still fighting until the first visible SC boards were displayed.

The Honda Civic Type R of Cammish left a slight gap at Luffield and Toyota Gazoo Racing UK with Ginsters’ Ingram immediately nipped up the inside. The pair ran side-by-side across the line with Ingram 0.009s ahead, but with the safety car boards being displayed at Woodcote, the Corolla driver was forced to concede the position.

Both Cammish and Ingram held station following the restart to secure valuable points in first and second, whilst the battle for the final place on the rostrum gathered momentum following Team BMW driver Tom Oliphant’s exit with suspension damage.

“Happy days!” beamed Cammish. “Tom [Ingram] didn’t make that easy, did he? I was so conscious of the start, I wanted to make a good one. I think me and Tom were about the same but, because I covered him off, I was so busy watching his front bumper that I kind of forgot to brake for turn one so ended up miles off the road, but thankfully I kept it together and off we went! Tom gave a good chase though. He got a lot of traction in those opening laps, he was able to drive lines that I just couldn’t quite get to and he actually got the lead. Thankfully for me, it was sort of under the Safety Car so I was happy to hear over the radio that we could reverse the positions!

“I didn’t think the door was open but he’s got so much front end. I’ve seen over the last couple of years how they set that car up and he can really use the front to rotate the car and maybe we’re a little bit lazier. But to be honest I also think he kind of ran out of front as the race went on and my car was consistent, and I managed to pull away in the end. It was a great drive by him. It was like a role reversal from last week – he made me work for it! But I’m really pleased to have got the victory.

“It means a lot to lead off the front and soak up the pressure and, to be honest, to get it off the line. After three terrible starts last week, 95% of that race was done in the opening corner, that could have been very different. But it’s not over yet, still got more to do and keep it consistent. It’s been a great opening race, I’m really pleased. The guys have given me a great car all weekend so a massive thanks to Team Dynamics and now we move forward. Let’s see if we can keep racking those points up.”

Ingram was equally pleased with his progress as he focusses on the overall picture.

“I said to David [Addison] before the start of the race on the warm-up lap, ‘yes I want to win, of course, I’d like to win, but at the same time I’ve got to be wary that I’m after points and points make prizes’,” he said. “So I had to be wary of that. At the start, I had a little bit of a better launch than Dan [Cammish] and we were elbows out on the first lap, but then we had the Safety Car and I managed to get the move done.

“As I was coming down the back straight, Spenny [Aldridge] came on the radio to say there was a Safety Car out that lap. So I thought bingo – I know Dan will have got the same call, so I’ll launch an attack when Dan isn’t expecting it, and it worked perfectly. I thought I was ahead at the line but obviously the timekeepers had a look at it and said it was the other way around. But a great result nonetheless, a great result for Toyota Gazoo Racing UK with Ginsters so I’m very pleased.”

Motorbase Performance’s Rory Butcher produced an impressive defensive drive as he had the championship’s top two drivers in his mirrors. Team BMW’s Turkington was quicker than the Ford, but in all the wrong places, as the reigning champ couldn’t mount a serious move. Laser Tools Racing’s Ash Sutton closed in and the trio were nose-to-tail in the closing laps.

Not for the want of trying, the positions remained unchanged until the finish with the title race now shaping up to be an absolute classic.

“I didn’t make it easy for myself at the start,” confirmed Butcher. “I launched pretty badly and had to take a few risks on that first lap to make sure I held position. And then it was quite easy to see Colin [Turkington] had a bit more minimum speed in the corners; he just came right up onto my rear bumper. A couple of times I thought that he was going to get past on the exit so I just had to cover all bases. But as soon as Ash [Sutton] came onto his tail it made my life a little bit easier. I knew that Colin’s mind would be elsewhere.

Adam Morgan was the best-of-the rest in the Carlube-backed Mercedes, ahead of the scrapping Jake Hill in the MB Motorsport accelerated by Blue Square Honda.