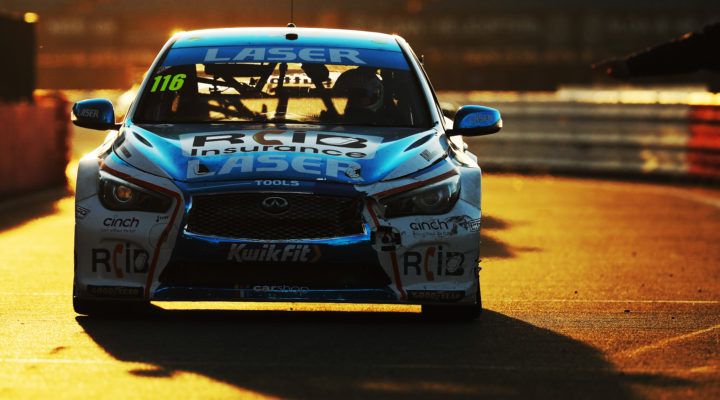 The race three finale exemplified the highs and lows of motor racing – particularly for Motorbase Performance – as title contender Rory Butcher experienced the biggest accident of his career so far, whilst team-mate Ollie Jackson took a maiden BTCC victory in an unforgettable encounter.

Cammish finally converted pole position into victory in the opener, but it wasn’t without a huge scare as he took on his Thruxton nemesis Ingram.

The top five drivers in the standings occupied the top five finishing places as the leading quintet produced a high-class contest.

Honda man Cammish held P1 off the line – something he struggled with in Hampshire last weekend – but he couldn’t hang on for long as he and Toyota Gazoo Racing UK with Ginsters’ Ingram swapped places twice on the opening tour.

Cammish critically nipped back by before the end of the first lap and would resist an even bigger challenge on lap five, as the pair ran side-by-side across the start/finish line.

The 31-year-old even dealt with a safety car period to collect his third race win of the season.

The Honda Civic Type R of Cammish led away before relinquishing the lead to Ingram by the end of the first tour. Earlier in the lap, there was contact between the Infiniti Q50 of Sutton and Butcher’s Ford Focus at Becketts, which ultimately sent both tumbling down the order.

Second soon became first for the reigning champion as race leader Ingram suffered a puncture under braking into Becketts, and further fortune followed for Turkington when Sutton’s recovery drive was also ended by a puncture – potentially picked up during the earlier incident with Butcher.

The UK’s elite motorsport series has delivered time and time again down the years and the final bout at Silverstone will go down as one of the very best as Jackson scored a famous victory.

Laser Tools Racing’s Sutton went from 26th to second by the finish, which was just one of many amazing stories at the Home of British Motor Racing, although he was later relegated post-race to third.

The action commenced in dramatic fashion with one of the biggest accidents in recent years, when contact between Matt Neal’s Honda and Butcher’s Ford sent the latter into a heart-stopping barrel-roll at Becketts. Thankfully, Butcher immediately emerged unscathed from the incident – testament to the safety of the BTCC cars.

Championship contender Ingram had already been lost after his Toyota Corolla was bumped into the barrier, following a scrape between Tom Onslow-Cole’s VW and Carl Boardley’s BMW, but it was the huge incident involving Neal and Butcher that brought a stoppage to the contest.

If that wasn’t enough drama, the rescheduled 12-lap sprint had it all, as more than a dozen drivers contended for victory.

Jackson had jumped Team BMW’s Tom Oliphant off the line and, although he lost the lead for a matter of seconds later in the race, he fought back well to return to the front.

Oliphant was soon having to worry about the likes of Morgan and BTC Racing’s Josh Cook and Tom Chilton, as well as the absolutely charging #116 Infiniti of Sutton.

The 2017 champion had already sliced past numerous rivals and was somehow staring at an unlikely victory as the race drew to an enthralling climax.

Positions changed hands several times before Sutton went side-by-side with Oliphant through Copse on the final lap. Sutton eventually made the move stick, but it had given Jackson just enough breathing space to hang on at the front.

This was one of those moments when the ordinarily packed grandstands would have been on its collective feet as Jackson crossed the line to take a hugely popular victory from Sutton and Oliphant. The final two podium positions were reversed post-race, however, when Sutton was adjudged to have gained an unfair advantage during his battle with Oliphant.

Despite the minor time penalty, Sutton left Silverstone with a four-point advantage over Turkington in the overall standings, with Cammish a further 13 in arrears – the latter having collected his best-ever race day points haul.

BMW holds sway in both the Manufacturers’ and Teams’ tables, whilst Sutton and his Laser Tools Racing squad command the Independents’ leader board.

Rounds 19, 20 and 21 of the Kwik Fit British Touring Car Championship takes place at Croft on 10/11 October.

Ash Sutton said: “What a rollercoaster day! By far the best race of my career. I’ve now realised where our pace at Donington went. It’s the weight in the car. Since then we’ve had weight in the car and it was taken out here for race three and we’re back to where we were at Donington. The thing is absolutely phenomenal. I can’t get over it.

“When you’ve got a car that good underneath you and I could see that Tom [Oliphant] was struggling a bit with Ollie [Jackson], there was a bit of elbows going on there and I thought I would try to take advantage of that. It kind of fell into my hands.

“Tom gave me a load of racing room through turn one and I respect that, he didn’t run me wide or anything like that. He gave it his best shot with Ollie and unfortunately there weren’t enough laps for me to have a go.”

Dan Cammish said: “Happy days! Tom [Ingram] didn’t make that easy, did he? I was so conscious of the start; I wanted to make a good one. Tom gave a good chase though. It was a great drive by him. It was like a role reversal from last week – he made me work for it! But I’m really pleased to have got the victory.

“It means a lot to lead off the front and soak up the pressure and, to be honest, to get it off the line. After three terrible starts last week, 95% of that race was done in the opening corner, which could have been very different.

“The guys have given me a great car all weekend so a massive thanks to Team Dynamics and now we move forward. Let’s see if we can keep racking those points up.”

Colin Turkington said: “All credit to my guys and Team BMW, I had a really fast car in that race. Once we took a bit of the weight out, the handling was incredible. I knew I had good pace but to be able to pick up on the other guys’ misfortunes, I’m just so excited to win today. I can’t remember winning at Silverstone. It’s become a bit of a home Grand Prix for us, so it’s an extra special feeling to win here at Silverstone.

“Thruxton really didn’t go my way at all. I felt a bit of momentum swing to the favour of the other guys and I felt on the back foot the whole way through Thruxton and even Free Practice here at Silverstone. But we kept working hard, kept digging and the result has come to us. It felt like it was slipping away, and we’ve made some ground back. It’s great to get my car home in one piece.”

Ollie Jackson said: “I’m really, really emotional. It was terrible obviously for Rory [Butcher], thankfully it sounds like he’s okay. Amazing day, after not a brilliant qualifying, and to make it back up, to get a good start and to actually take the win is amazing – I’m living the dream.

Qualifying:
Jack Butel was penalised by means of a seven place grid penalty and had his licence endorsed with three penalty points for an incident involving James Gornall

Race 3:
Ash Sutton was penalised by the addition of 0.3 seconds to his race time for gaining an unfair advantage in an incident involving Tom Oliphant