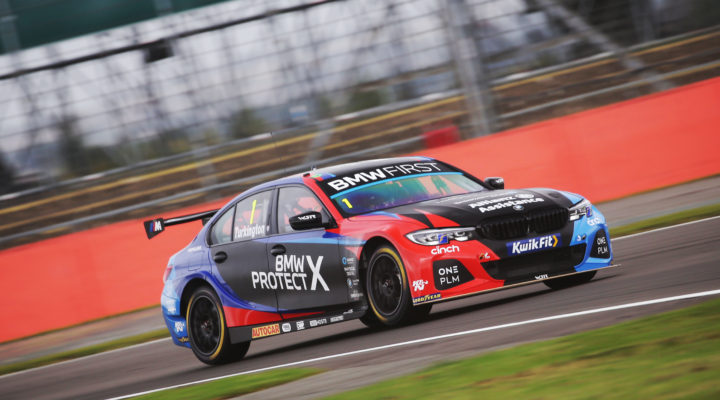 Pole-sitter Dan Cammish led off the line in the Halfords Yuasa Racing Honda Civic Type R but Toyota star Tom Ingram nipped into the lead before the end of the first tour. Earlier in that lap, there was contact between championship leader Ash Sutton and Motorbase Performance’s Rory Butcher at Becketts, which ultimately sent both tumbling down the order.

Second soon became first for the reigning champion as race leader Ingram suffered a puncture while braking into Becketts, and further fortune followed as Sutton’s recovery drive was also ended by a puncture – potentially picked up during the earlier incident with Butcher.

So if Thruxton went against Turkington last weekend then the tide has turned here as the four-time champion has taken a first win at Silverstone since 2015, and with it the standings lead from Sutton.

“All credit to my guys and Team BMW, I had a really fast car in that race,” said Turkington. “Once we took a bit of the weight out, the handling was incredible. I knew I had good pace but to be able to pick up on the other guys’ misfortunes, I’m just so excited to win today. I can’t remember winning at Silverstone. It’s become a bit of a home Grand Prix for us. Since moving to the UK we’re quite close to here, so it’s an extra special feeling to win here at Silverstone.

“Thruxton really didn’t go my way at all. I felt a bit of momentum swing to the favour of the other guys and I felt on the back foot the whole way through Thruxton and even Free Practice here at Silverstone. But we kept working hard, kept digging and the result has come to us. It felt like it was slipping away, and we’ve made some ground back.

“You see how quickly things can change. I’d been watching footage this morning from last year, the 2019 coverage, and saw that two cars had got front left punctures going through Brooklands so I was mindful of that and to try and stay away from it. It’s great to get my car home in one piece.”

Cammish collected second as his impressive day continues and a special mention for Adam Morgan – the Carlube TripleR Racing with Mac Tools driver completing the podium positions after a late change to the setup of his Mercedes A-Class.

Halfords Yuasa Racing’s Matt Neal took fourth, whilst Aiden Moffat produced one of the best performances to take fifth. The Laser Tools Racing driver made a number of eye-catching moves, none more so than when he made it three-wide along the start/finish straight, before slicing down the inside of two cars on the exit of Copse.

Team BMW’s Tom Oliphant was the star of the show as the 2020 race-winner carved his way through the order from the back of the grid. An issue in race one forced him out of contention, but the Tarporley-based driver fought back brilliantly in the next bout to take ninth, and he was further rewarded post-race with pole position in the reverse-grid encounter that will take place at 1724 later today – live on ITV2.

“I’ve been asked by Dick Bennetts to pull out number nine which would put my team-mate on pole but, given my track record, I don’t fancy my chances,” commented Turkington shortly before carrying out the draw. You make your own luck in the BTCC, but Turkington proved untouchable both on and off-track during this one.