TEAM BMW BOUNCES BACK AT SILVERSTONE 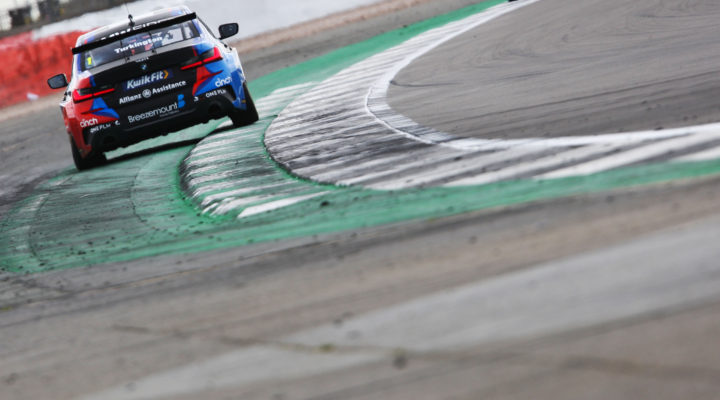 Team BMW celebrated a strong weekend in the latest rounds of the Kwik Fit British Touring Car Championship, with five points-scoring finishes including a win and a further podium at Silverstone (26/27 September).

Qualifying ahead of Round 16 of the 2020 campaign saw the BMW pair state their intentions of a successful weekend, with Colin Turkington fourth on the grid for Sunday’s opening contest, and Tom Oliphant equalling his best qualifying position of the season so far, in fifth.

Running in the top five following a brief safety car period, Oliphant was forced into retirement owing to an issue with his right rear suspension.

Turkington held position until the chequered flag, as the Northern Irishman spent the initial 11 laps looking to move into the podium positions, before Oliphant’s retirement would see the #1 car commence a defensive drive from Ash Sutton for the remainder of the race.

Free of ballast and starting from 25th on the grid, Oliphant’s performance in race two could arguably be touted as one of his best to-date. On the move as soon as the lights went out, the 30-year-old was up into the top 20 by the end of the opening lap and his unrelenting charge only continued.

Scything his way through the order as the laps ticked by, the former Ginetta GT4 Supercup champion was soon into the points come the halfway marker. Continuing to push on, Oliphant’s eye-catching overtakes powered him into the top ten and ultimately to ninth at the chequered flag.

Also moving up the order from the opening lap, Turkington stated his intentions on the podium from the offset, taking third by the end of lap one after contact between Butcher and Sutton dropped the pair down the order.

The reigning champion then launched an attack on the Honda of Dan Cammish for second, before grabbing the place on the exit of Woodcote.

Turkington would go on to take his 150th BTCC podium with a win, as race-leader Ingram suffered a puncture with five laps remaining.

In what has become protocol for 2020, race winner Turkington undertook the reverse grid draw and, in his luckiest draw so far this year, would secure a pole position start for team-mate Oliphant.

With the sun setting on the famous venue, Oliphant made a good start from P1, however, it was the Ford of Ollie Jackson which took the lead.

The West Surrey Racing ace soon began to hound the race-leader. Filling Jackson’s mirrors, Oliphant had looked set to make the decisive move for the lead before a red flag halted proceedings.

Following a lengthy delay, Oliphant launched off the line in second place on the restart and the chase to pass Jackson continued for the one-time race winner. He would take the lead across the line on lap six, but the Ford of Jackson would get back past the BMW.

The arrival of Sutton into the lead battle late on prevented one last push for the win, leaving Oliphant to take a hard-fought and well-earned second place.

The final encounter of the day for Turkington saw the 38-year-old secure another top-ten finish, despite his BMW 330i M Sport holding maximum ballast following his race two victory.

Leaving the Northants circuit, Team BMW holds its lead in the Teams’ standings, while Turkington has narrowed the gap to just four points from overall championship leader Sutton. Oliphant remains sixth in the Drivers’ order following the sixth event of the season.

“Overall, I’m happy to come away with a podium,” said Oliphant, “especially considering my race day started with a non-finish and then having to fight my way from the back of the grid.

“We worked as a team in qualifying to get onto the third row of the grid and in race one I had great pace to stay inside the top five; unfortunately it wasn’t meant to be as the suspension failed through Copse. I had a small feeling in the steering wheel a few laps before, so knew that something wasn’t right and then it let go.

“Starting from the back and with the weight out of the car in race two, I was only focussed on going in one direction. The car felt amazing and I really enjoyed working my way up the order; thankfully we were rewarded for our hard work in the reverse grid draw.

“Having started on pole position in race three, the win was there for the taking. The start line boost reduction cost us on both starts, but I threw absolutely everything at Ollie to try and find a way past. Second is a good result though and it means we’re still in the mix heading to Croft.”

“I’m very proud of my qualifying performance, and it has stood me in good stead in the past,” said Turkington. “The aim is to keep qualifying well and give myself the best chance for race day. Our race starts are not as strong as they used to be with the start line boost reduction, and that’s really hurting us off the line. So qualifying has been more important than ever!

“We’ve had a really strong season so far, and Thruxton aside I’ve been on the podium every weekend. There’s always a delicate tipping point with the success ballast. Sometimes you can manage the 60kgs, and other times you really feel the pain of it. I’m happy to be heading to Croft with second position ballast, but only four points from the top. It’s impossible to pull a big gap out front, and if you do it tends to be a false sense of security.

“We head to Croft next which has always been one of our stronger tracks, so I can’t wait to get driving again at my favourite circuit and see what I can do. It’s going to be a fight until the final flag drops, but I’m fired up for it and will continue to push myself and do everything I can to outwork the others.”

“That win was so special and I made sure to enjoy the moment; this series never gets any easier and the wins are harder and harder to come by. There’s a different story attached to every single one of those 150 podiums and most of them include their fair share of blood, sweat and tears.

“Our rivals capitalised on my Thruxton misfortune and you can see their increase in pace, so I was beginning to think the momentum was shifting away from me. This comeback was crucial, but you can see how quickly the championship picture can change.”

The Kwik Fit British Touring Car Championship continues its 2020 campaign in just under two weeks’ time when the series heads to North Yorkshire on October 10/11 for Rounds 19, 20 & 21 at Croft Circuit.