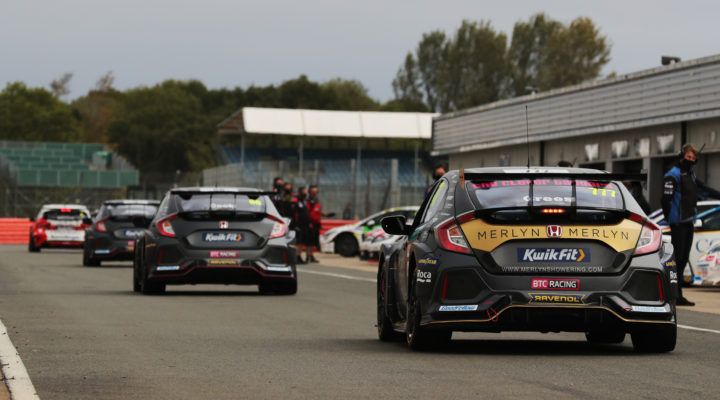 A battling performance by the BTC Racing team during the sixth meeting of the 2020 Kwik Fit British Touring Car Championship was rewarded with a quartet of top ten finishes on Silverstone’s National Circuit last weekend (26/27 September).

Competing at its iconic home track, the Brackley-based outfit overcame a number of mechanical issues and engine woes during the latest race event of the 27-round campaign to secure six points finishes at the Home of British Motorsport.

Qualifying saw Tom Chilton take top honours for the BTC Racing trio in ninth during a damp and chilly session. Despite being less than three tenths-of-a-second shy of a front row start, Josh Cook found himself back in 12th while Michael Crees wrestled with the set-up and balance on the Clever Baggers with BTC Racing Honda and ended the session a disappointed 23rd.

Chilton was running well before being forced to take evasive action to avoid coming together with the Honda of Matt Neal and dropped down the order to take 15th at the flag.

Unfortunately, Crees’ race was short-lived, with the Clever Baggers-backed racer tipped into a spin heading into Maggots-Becketts on lap five, leaving the #777 stricken in the gravel.

Race two delivered plenty more drama, with both Cook and Chilton moving through the order to collect another haul of points for their championship campaign, as Cook secured sixth and Chilton brought the #3 Civic home in 11th.

Starting from the back of the grid, Crees was making excellent progress to close in on the points-scoring zone before an engine failure forced him into the pits where he recorded his second DNF of the day. Racing against the clock before the final contest, the BTC Racing crew completed a full engine change on the #777 Type R, ensuring that Crees made the grid with just minutes to spare.

Following a red flag incident, a re-start was declared with a new shortened distance of 12 laps for race three. Regrettably, the day would end on a low note for Crees, with an oil leak on the #777 car dashing his hopes of reclaiming a result from a challenging weekend.

A frenetic end to the day followed; Cook’s start off the line saw the #66 Civic steal into third at the first corner, with the Bath-based racer targeting a podium as the chasing pack loomed large in his mirrors.

A stunning multi-car pass from Chilton with a late lunge at Brooklands fired him up the order to briefly take fourth before a fierce battle ensued as the front-running pack duelled door-to-door for the final place on the rostrum. After trading positions numerous times, the pair finally brought the brace of BTC Racing FK8s home in seventh (Cook) and ninth (Chilton), adding to the squad’s points tally.

Having secured four top ten results at the Home of British Motor Racing, BTC Racing maintains its fifth and third spots in the overall and Independent Teams’ standings. Chilton remains in seventh and third place respectively, with Cook moving up to take 12th and tenth in the points tables.

A zero-score weekend for Crees resulted in the Kent-racer dropping to second in the Jack Sears Trophy Standings, albeit just eight points off the lead.

The BTC Racing trio return to action in just over a week’s time, as the Kwik Fit British Touring Car Championship heads to Croft in North Yorkshire for the seventh meeting of the season on 10/11 October, with all of the race day action broadcast live on ITV4.

“It was a difficult weekend for the whole team,” admitted Joint Team Principal Bert Taylor. “I think the story of the day would be we came, we tried hard and we came away with very little on paper. But looking at the positives, we made a step forward with Josh’s brake issues, sorted out a few problems and worked our way back up to the front.

“If you look at the whole weekend and analyse the results, we’ve had two cars in the top ten and they were both in the podium fight in the last race. It feels painful, as we want to win, but it isn‘t that bad. Ultimately the whole garage has got its mojo back after a really hard six weeks.”

“We just struggled with straight-line speed all weekend and that always shows up at Silverstone,” reflected Chilton. “It was rather painful at times, but I was happy with my performance. There’s nothing else I could have done. Even though we were down on power on the straights, we were very competitive around the corners and I really enjoyed the final race – it was a great battle.

“We were just unfortunate with mechanical failures all day. I had a power steering rack break in each race, which I’ve never had before in all my years of racing so we need to get to the bottom of that.”

“We had brake issues again on Saturday so that was reflected in our qualifying result,” added Cook. “Once again, the chassis was strong but the weekend just further highlighted the straight-line issues we’re having.

“As a team, we’re trying to understand why and how to rectify it, but at the moment we are just sitting ducks. We have to find a way out of this. We’ve shown what happens when it’s about the chassis – the car is a weapon. We’ve got the Honda so well hooked-up, it feels mega to drive but we can’t control what happens in fifth and sixth gear.”

“After the highs of Thruxton, this was a weekend to forget,” rued Crees. “We had mechanical problems in qualifying which upset the balance of the car and meant we were way down and out-of-position in P23. We changed the set-up for race one, and the car felt really good before we were taken out.

“Starting from the back of the grid in race two, we had a good start getting up to 17th and then the engine blew. The lads all did a mega job to get me back out onto the grid for race three, and we had another good start before the red flag. Unfortunately, we had another engine fault, with an oil leak and it was game over.

“After what happened in race three though, I just feel really happy that [Rory] Butcher is ok after his crash. That’s what really matters.”