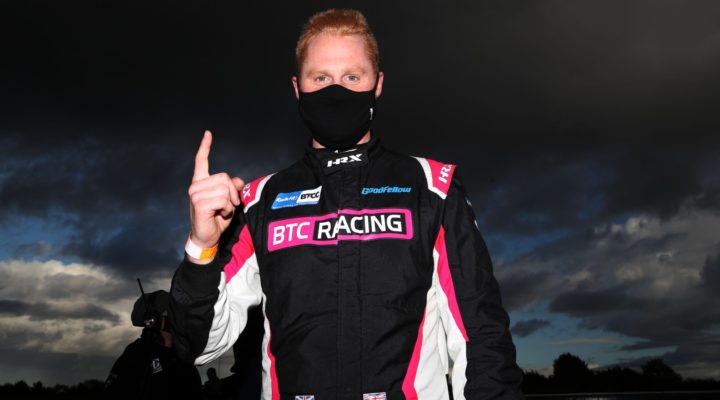 Heavy rain ahead of qualifying for Round 19 of the 2020 Kwik Fit British Touring Car Championship contributed to one of the most dramatic sessions of the season so far, with a number of contenders hitting trouble as BTC Racing’s Josh Cook eventually secured pole position at Croft Circuit.

There was drama before, during and after the 30 minutes of action as a huge downpour descended on the North Yorkshire venue.

Sutton looked set to improve even further with ten minutes of the contest remaining, only for his team-mate Aiden Moffat to slide off at turn one and bring about an immediate stoppage to the session. The #116 of Sutton was on a quicker lap at the time, before having to abort his effort in the final sector.

Frustration turned to dismay shortly after the restart as Sutton produced a carbon copy moment to Moffat, also ending his session in the gravel at Clervaux. As Sutton was responsible for bringing about a further stoppage, the rules determined that the 2017 champion would lose his fastest lap, as well as being prevented from taking part in the remainder of the session.

Sutton’s misfortune seemed to benefit Excelr8 Motorsport’s Senna Proctor, who was now sitting atop the timesheets, with a final flurry to the chequered flag still to come.

Halfords Yuasa Racing’s Dan Cammish was the next driver whose happiness was short-lived as he blasted his Honda Civic Type R into P1, only to subsequently lose his lap time for a track limits infringement, as did several others during the running. This sent title contender Cammish tumbling down to 14th in the order.

As Cammish was having his moment it was now the turn of Toyota Gazoo Racing UK with Ginsters’ Tom Ingram to grab provisional pole position, with Cook slipping into second ahead of Proctor.

The chequered flag finally waved to bring a close to a breathless session, but the drama was far from over as it immediately became clear that both Ingram’s Toyota Corolla and Proctor’s Hyundai i30N failed post-session ride height checks – the former’s was subsequently found to be because of a front-right wishbone failure.

Rules are rules at the highest level of motorsport so when the rain had finally cleared at Croft it was Cook celebrating his first pole position of the season, ahead of MB Motorsport accelerated by Blue Square’s Jake Hill and Team BMW’s Colin Turkington.

The lead trio had already showed their hand by occupying the top three positions in the final Free Practice session earlier in the day, so it was little surprise to see them contending come qualifying.

Team BMW’s Tom Oliphant took fourth, ahead of GKR TradePriceCars.com’s Bobby Thompson – the latter scoring his best ever grid position in the BTCC.

Sutton’s scare eventually passed without too much punishment as the 26-year-old secured sixth ahead of BTC Racing’s Tom Chilton.

Round 19, 20 and 21 of the 2020 Kwik Fit British Touring Car Championship take place at Croft tomorrow (11 October) with all three races being broadcast live and exclusively on ITV4 from 1130.

Josh Cook said: “It’s fairly ironic for me as I failed the ride height check at Oulton Park and lost the win. I’m gutted for those guys if that has happened, it can be cruel sometimes. All I can say is it was just a mega job by the guys at BTC Racing! It’s been obvious that we’ve struggled on a Saturday the past few weekends, and we’ve worked really really hard since [Silverstone] and we just came out swinging in FP1 today and the car is phenomenal. I feel a bit like we had a little more in the tank, but everyone says that.

“The guys and girls at BTC Racing have worked really hard and obviously Team Dynamics have been helping out too so it’s good to be working with them again to resolve our issues. All I can say is credit to the team, it’s been a tough season and all you can do is get your head down and keep on going, and that’s all we’ve done. It’s been a good day today, but obviously it only counts tomorrow.

“I’m hoping for three wins and three fastest laps tomorrow! We know we’ve got a good car, we’ve always had a better race car than qualifying car. We look after our tyres really well which is super important on this circuit – those rear-wheel drive cars are going to be coming through. Who knows, but it’s going to be one to watch for sure!”