TITLE CONTENDERS UP TOP IN FP1 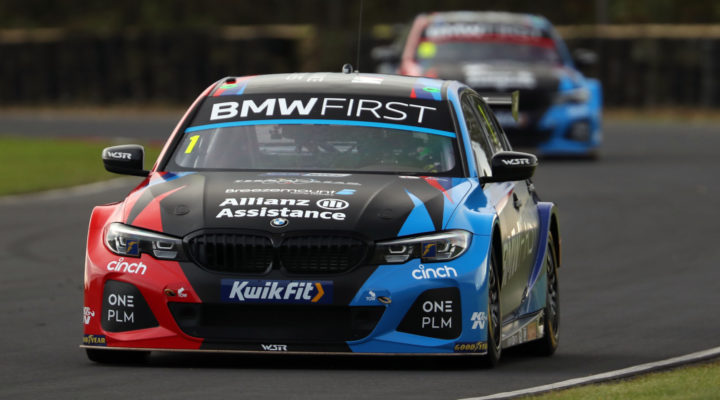 Free Practice 1 is not always a pointer to the weekend ahead in the Kwik Fit British Touring Car Championship, but a number of title contenders have fired out of the block this morning with Colin Turkington, Ash Sutton and Dan Cammish leading the way in the opening session at Croft.

With just three events of the campaign remaining and 17 points separating the lead trio it seems that the race for supremacy may have started earlier than usual at the North Yorkshire circuit with Team BMW, Laser Tools Racing and Halfords Yuasa Racing all putting in considerable mileage during the 40-minute run.

It was Turkington who claimed FP1 bragging rights with his 1:22.145s lap time topping the order, as the Northern Irishman completed a total of 20 laps of the 2.13-mile circuit – the most of any driver in the field.

Team BMW team-mate Tom Oliphant also holds hopes of winning the UK’s most coveted motorsport crown and he ended up fourth, just behind Sutton and Cammish.

There were mixed fortunes for the other championship protagonists as Motorbase Performance’s Rory Butcher ended up tenth, whilst Toyota Gazoo Racing UK with Ginsters’ Tom Ingram failed to set a lap time.

Motorbase Performance produced a fantastic effort to ready Butcher’s Ford Focus after the Scotsman suffered a huge accident at Silverstone last time, so kudos to the Kent team for ensuring that their man has been able to kick off his weekend in steady fashion.

Toyota Gazoo Racing UK with Ginsters is on the back foot, however, as a manifold issue with its Toyota Corolla prevented Ingram from setting a time. The Speedworks Motorsport-run outfit is looking to bounce back after misfortune at Silverstone in races 2 and 3, and now they’ll be needing to make up for lost time in FP2 here at Croft.

MB Motorsport accelerated by Blue Square’s Jake Hill was best of the rest in fifth, with BTC Racing’s Josh Cook in sixth – both benefitting from relatively ballast-free Hondas at this stage of the weekend.

RCIB Insurance with Fox Transport experienced a mixed session with Jack Goff running extremely well in 11th, whilst returning team-mate for the weekend – Mike Bushell – went off at Turn 1 in the early running.

Free Practice 2 takes place at 1205, before Qualifying for Round 19 of the 2020 Kwik Fit British Touring Car Championship commences at 1455 – the latter being streamed live via www.itv.com/btcc.