VICTORY FOR INGRAM AS DRAMA CONTINUES AT CROFT 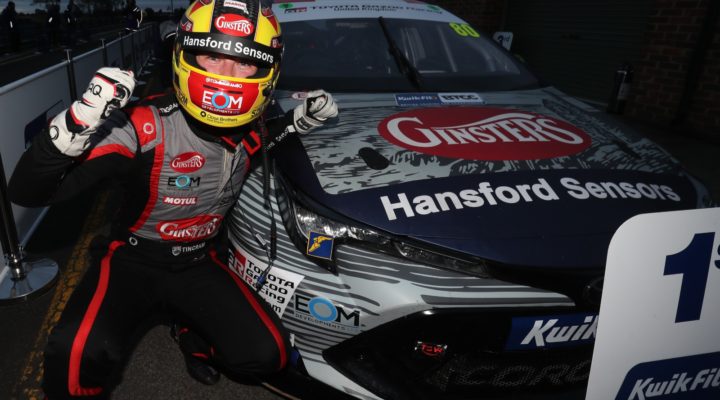 Tom Ingram rounded off an extraordinary weekend of BTCC action by winning the final race at Croft, completing Toyota Gazoo Racing UK with Ginsters’ own story of redemption having started today’s opening contest from the back of the grid.

Ingram grabbed pole position on-the-road during yesterday’s qualifying session, only for his Toyota Corolla to fail post-session ride height checks, resulting in a charge through the order during race day.

He surged from 25th to 13th in the opener before a hugely impressive fourth place in the second bout, but it was his performance in the finale that will live long in the memory for the Bucks ace.

Starting from third on the grid, Ingram blasted by Dan Cammish’s Honda Civic Type R off the line and shortly after, he was making a sensational pass by BTC Racing’s Tom Chilton on the run towards Sunny In.

Cammish closed in after he eventually passed Chilton in a similar move with the #27 machine the strongest on-track during the closing stages. Thankfully for Ingram, however, Cammish ran out of time and the victory went to the Speedworks Motorsport squad.

“I think the day has surprised us,” said Ingram. “From starting back in Darlington this morning, to finishing race three with a win, and I’m so, so happy. It just goes to show that you can never get your head down in Touring Cars; the day can turn around.

“You’ve just got to stay positive because it’s amazing what you can drag back from seemingly nowhere. I’m so, so pleased with how we’ve done as a team today. We’ve kept positive, kept our chin up and just focussed towards race three and trying to bag big points in the third race.

“I was so pleased to get to the end, I could see Dan was coming at me again, like we have done the past few weekends, like a freight train. To recover from where we did is a huge thing for Toyota Gazoo Racing UK with Ginsters and I just cannot say thank you enough to everyone at home for all their support as well because we’ve had loads of it so thank you!”

Chilton completed the podium ahead of Halfords Yuasa Racing’s Matt Neal and the phenomenal Ash Sutton – the championship leader having made up a total of 15 places in his Laser Tools Racing Infiniti.

Josh Cook was still the star of the weekend as he backed-up his pole position, two race victories and one fastest lap with a solid eighth place in the finale.

Colin Turkington slid out of contention as he picked up a puncture in the opening skirmishes, which compounded a difficult day for the man so often dubbed the ‘King of Croft’. The Northern Irishman returned to the track, taking the fastest lap in the process to score a solitary championship point. It could still be a critical score for the four-time champion, but he’s now 12 points behind Sutton in the standings.

The other moment was shocking in every sense as Thompson’s GKR TradePriceCars.com Audi S3 endured a frightening barrel-roll. Thompson was running in the pack and whilst the incident wasn’t made completely clear via the TV picture, the Essex man’s car was flung into the air at high speed and rolled several times before coming to rest on its roof. Despite the violent nature of the accident it was to everyone’s delight to see Bobby emerge from the wreckage without any visible injuries of note.

Sutton now leads by seven points from Cammish with Turkington a further five in arrears, whilst Ingram’s latest success fires him back into title contention.

The UK’s elite motorsport series now moves on to its penultimate event at Snetterton in two weeks’ time (24/25 October), before the season finale at Brands Hatch next month (14/15 November).