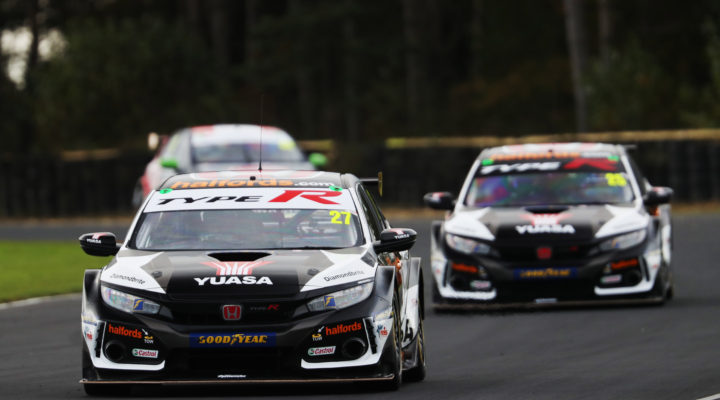 Cammish was one of many drivers to fall foul of track limits regulations during Saturday’s qualifying on a damp track, losing a potential fastest time to line up 14th on the grid. Neal also suffered from the ruling but recovered to secure eighth.

Starting in the middle of the pack for race one, Cammish knew the opening encounter would be tough, but made a good start and went on to gain places alongside his team-mate, avoiding the spinning car of championship leader Ash Sutton. Neither Honda was able to stop the recovering Sutton from re-passing them, but Neal finished seventh and Cammish tenth, banking useful championship points.

Race two would transform the pair’s fortunes, despite a delay for Cammish during a turn one incident that ended title rival Colin Turkington’s race in a gravel trap. Neal snatched fourth, which became third as an overtaking move by Sutton punctured his car’s tyre.

Neal quickly moved past Jake Hill into second and closed on leader Josh Cook. On the last lap, the two cars made contact, Cook’s car snapping sideways and Neal going past into what would have been his first win in more than two years. But stewards penalised the passing move and dropped the Halfords Yuasa Racing car back to second place.

With his Honda now relieved of success ballast, Cammish fought his way from tenth to fifth at the chequered flag, before his team-mate’s reverse grid draw put the #27 Honda on the front row for the final contest.

Cammish was beaten away at the start of the final race by Tom Ingram, who then deprived Tom Chilton of the lead. Cammish hunted down Chilton and snatched second with an opportunistic move. He then caught leader Ingram with a lap to go, failing to find a way past and settling for a second-place finish.

Neal kept a train of cars behind him for the entire race to finish fourth, as a last-ditch effort from Sutton failed to pass the Honda on the finish line. All of which won Honda its second manufacturer award of the day and propelled Cammish into second place in the Drivers’ championship, only seven points behind leader Sutton.

The BTCC now heads to Snetterton for the penultimate trio of races in the 2020 championship on 24/25 October.

“Such a rollercoaster weekend, it can change so fast,” reflected Cammish. “You come here thinking you are going to have a tough day and you end up having a pretty strong one. My qualifying was pretty poor, but I brought it back through the field. We had a good haul of points so I’m pretty happy with my day, though disappointed with second in race three as I thought I could have won it.”

“It was a shame to lose the race two win, but I wasn’t really surprised,” added Neal. “Josh’s car was much heavier and I got a good run on him on the last lap – I went for the inside and then as I was committed he went for the apex and we touched. Despite that, we have had a really good day with manufacturer wins for Honda and Dan closing in on the points lead – roll on Snetterton!”