COLIN TURKINGTON AT THE DOUBLE 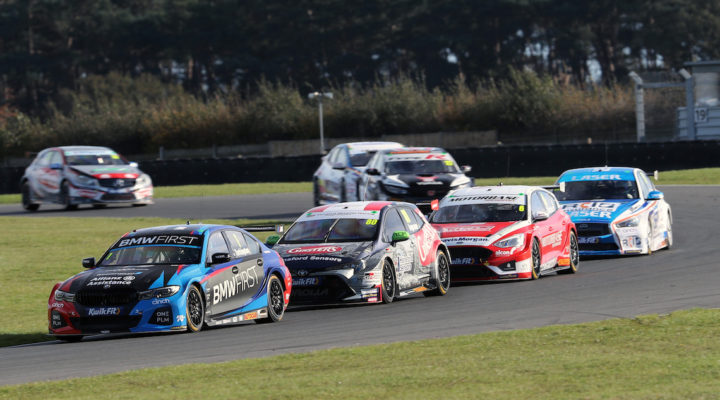 Team BMW’s Colin Turkington has taken his second win of the day as the 2020 Kwik Fit British Touring Car Championship title contenders went wheel-to-wheel in the second bout at Snetterton.

The top five in the overall Drivers’ standings occupied the top five positions for the majority of the race, with the only change coming during a last lap showdown following a late safety car period.

The battle simmered rather than reaching boiling point as Turkington produced a commanding victory from Toyota Gazoo Racing UK with Ginsters’ Tom Ingram, although the latter did well to hang on for second.

“It’s still the same pressure,” said Turkington. “I got a good start again, and survived the first lap when the pressure was on, but it was really the scrap behind me that allowed me to break free. I saw that Tom [Ingram] was having an almighty race trying to keep the others behind, so I just tried to keep my focus, keep chalking down the laps. I could have done without the safety car at the end, but I managed it well and took home another win – there’s nothing that beats that feeling of winning!

“It’s a lovely place to be out in front – it’s a luxury. The BMW has been ballistic this weekend at Snetterton, so absolute credit to Team BMW for that.

“Race three is about surviving, getting stuck in and still trying to get some really good points. You’ve got to fight for every point, but I’m looking forward to a really good scrap.”

Motorbase Performance’s Rory Butcher nibbled at Ingram’s Toyota Corolla several times, with a significant effort made on the final lap. Butcher made a late lunge on Ingram at Wilson – leading to contact – which enabled Laser Tools Racing’s Ash Sutton to join the fray. Ingram fended them off as Sutton slipped into third, while Butcher fell into the clutches of Halfords Yuasa Racing’s Dan Cammish.

“I’ve no idea what happened,” confirmed Ingram. “We had a fairly substantial knock to the rear, but it was going to come. It was 14 laps of bumper-to-bumper action so there was a certain amount of inevitability. Every time you come into the hairpin and you’ve got a train of cars behind you, you’re always waiting for the bump. I had two or three of them over the race distance, but you always brace for them anyway. I’m glad to come out of it relatively unscathed but it was a hard, hard race keeping all that lot behind.

“Ash is top-class. We know he’s super aggressive and he’s always going to be one to stick his nose in. I’m mindful of anyone on the last lap as obviously it’s the last opportunity to make a move. Ash has always been very strong over the last few laps, especially in a rear-wheel drive car. But it was hard work keeping Rory behind too. Wherever I stood they were coming at me.”

It was Butcher’s turn to take a hit at the final turn as Cammish’s Honda Civic Type R slid into the Ford Focus through Murrays. It was Cammish that lost out, however, as the recovering Jake Hill pipped the Halfords Yuasa Racing car to the line by just 0.047s – breaking the race-long monopoly of the top five contenders.

BTC Racing’s Josh Cook scrapped to seventh ahead of the amazing Ollie Jackson in the Motorbase Ford Focus. Jackson began the contest in 21st and gained ten places over the first few laps, before making further progress in the closing stages. He eventually ran side-by-side with Adam Morgan’s Mercedes over the finish line and claimed eighth place by an incredible 0.002s.

The battle for the Jack Sears Trophy also intensified, as Michael Crees took his second win of the day. The Clever Baggers with BTC Racing driver now leads Bobby Thompson by three points, with Sam Osborne two points further back and Carl Boardley a further point in arrears.

The Team HARD outfit was in the wars again, as Jack Goff crashed out of heavily on the exit of turn one on the penultimate lap – bringing about the aforementioned safety car – whilst Nic Hamilton was unfortunately swiped into the barrier following contact from the wayward Audi S3 of Paul Rivett.