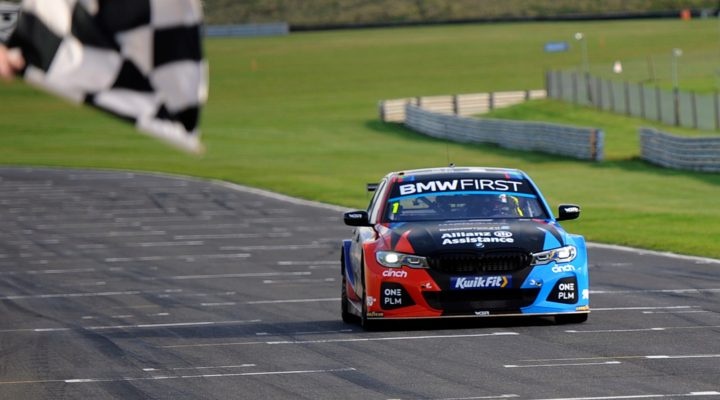 Team BMW’s Colin Turkington secured a lights-to-flag victory in the BTCC opener at Snetterton despite the early attentions of Toyota rival Tom Ingram.

Turkington’s 3 Series blasted away from the line with what looked to be one of the best starts of the season, as Toyota Gazoo Racing UK with Ginsters’ Ingram breezed by the sluggish-starting MB Motorsport accelerated by Blue Square Honda of Jake Hill.

Motorbase Performance’s Rory Butcher was another who bogged down at the start, which seemingly created a concertina effect going into turn one. It was a nervy moment as an incident involving Laser Tools Racing pair Ash Sutton and Aiden Moffat, Ollie Jackson (Motorbase Performance) and Tom Oliphant (Team BMW) left the latter duo spinning out of contention – potentially ending the BMW man’s championship challenge.

Reigning champion Turkington declared the first lap as ‘tricky’ post-race, particularly so when Ingram’s Toyota Corolla went side-by-side with the #1 machine around the outside at Agostini. Turkington cleverly squeezed Ingram on the exit of the turn, bringing Hill back into the battle. Hill scythed by Ingram but then ran wide through the next left-hander at Hamilton and Ingram was back into second.

So Turkington, Ingram and Hill were confirmed in the podium positions but there was another scrapping trio behind them with Butcher eventually getting the better of fellow title contenders Sutton and Dan Cammish (Halfords Yuasa Racing).

Sutton and Butcher’s early exchanges were aggressive to the say the least as the pair bumped and barged their way down the Bentley straight and through Brundle. Scotsman Butcher held on, however, to claw back some points on the standings leader.

Adam Morgan made up early ground as he went from tenth to seventh in the Carlube-backed Mercedes, whilst the top ten positions were completed by Josh Cook (BTC Racing), Senna Proctor (Excelr8 Motorsport) and Michael Crees (The Clever Baggers with BTC Racing). Crees drove brilliantly from 17th on the grid as the Honda Civic Type R driver also went on to take an important Jack Sears Trophy win.

Remarkably, Turkington and Sutton are now tied at the top of the standings after 22 incredible contests as the race winner also grabbed a vital score for setting the fastest lap. Honda star Cammish is just eight behind the leading pair, with Ingram a further 15 back.

The unmissable drama continues with races two and three later this afternoon, with all the action now live and exclusive on ITV4.

Colin Turkington said: “Obviously it was a great start to my day – it’s always nice to get pole and convert it into a win. I think we were all fretting at Team BMW before the race because we had wet tyres on the 3 Series as we sat in the garage as the track was taking a long time to dry. Just in the end it flicked over, so we started the race on slicks. That first lap was a bit tricky and as the leader, you’re the one doing all the experimenting. But I knew that if I could keep Tom [Ingram] and Jake [Hill] behind me for the first laps that I would have a good chance of converting the race. It was an excellent start.

“I knew Jake would be pretty quick over the opening few laps and I could see those guys were battling. It just allowed me to get the car up to speed, assess where the grip was and get my head down. I was going for every point which you’ve got to do in this championship; I wanted to lead the lap, get the fastest lap and maximise my return after a difficult Croft. It feels really nice to bounce back.

“The added weight is going to slow me down in race two, putting that extra 12kg in the car, but I think I can get off the line as well as I did in race one. I was on the drier side of the track which got me a breather into turn one. We’ll keep making the car faster. I’d like to dedicate this win to a good friend who’s in hospital at home but is thankfully getting better – this one’s for you, Victor.”