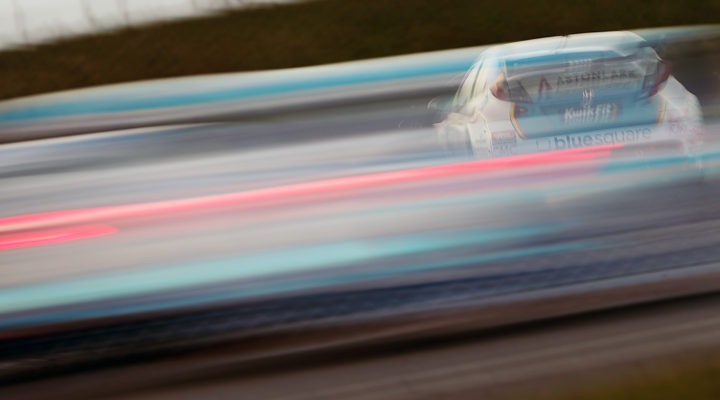 MB Motorsport accelerated by Blue Square maintained its impressive run of form with a fifth podium finish of the season at Snetterton during the latest rounds of the Kwik Fit British Touring Car Championship.

On the back of a hugely successful weekend at Croft in the previous event – where he secured a brace of top three finishes – rising star Jake Hill was able to add to his podium tally and also secured a first Independent class victory for the team, with Sam Osborne adding more points to his total in the sister Honda.

Having qualified on the front row of the grid after another impressive performance on Saturday, Hill headed into race one hoping to challenge pole sitter Colin Turkington for victory, but lost out to the Toyota of Tom Ingram on the opening lap.

As Turkington edged away in the lead, Hill diced for second with Ingram for the entire race; briefly edging ahead only to wisely gift the position back after contact whilst completing the move.

Third overall was still a fifth podium of the season for Hill, and also saw him secure the Independent class victory; the first such win for the team.

Starting from P18 on the grid, Osborne’s focus in the opening race was on trying to score valuable points towards the Jack Sears Trophy, he ran as high as 15th before taking the flag in 17th; scoring third place points in the JST, closing in on the standings lead.

Despite slipping down to sixth spot on the opening lap of race two, Hill showed strong pace throughout the race notwithstanding the additional success ballast now being carried on the #24 Honda.

Battling for position with the Honda of Dan Cammish, the 26-year-old was able to beat his rival in a run to the line out of the final corner to take fifth place and another strong haul of points.

Osborne, who spent the whole race running on the fringes of the points, diced for position with fellow Jack Sears Trophy hopeful Carl Boardley and managed to get ahead of the BMW on the final lap, securing second in class and the final championship point.

A frenetic final race saw Hill in the heart of the action alongside numerous championship contenders, and he came through the reverse grid race unscathed to end the weekend with a solid ninth place.

Consequently, Hill ends the weekend sitting eighth in the overall standings and fifth in the Independents’ Trophy with just the season finale at Brands Hatch left to run.

Osborne looked well placed to fight for more points in race three as a strong opening lap saw him leading the JST runners, but his race would come to an early end when contact from Senna Proctor saw him forced off onto the grass and into retirement.

Despite that, he will head to Brands Hatch fourth in the JST standings; 25 points off the lead with 60 still available.

“We’ve had another fantastic weekend and it’s nice that we are now regularly in contention for podium finishes,” said Hill. “Getting a first Independent class win is also nice; even if it’s been a little overdue! Race two was also pretty good apart from the start where I had too much wheelspin and in race three, I found myself in the wrong place at the wrong time when we were all battling in the pack and fighting for position. P9 was still a good result but we could have ended up battling for the podium again if we’d broken away from the pack. It’s all to play for in terms of the top three in the Independents’ title race and I’m hoping we can end the year well at Brands Hatch.”

“I felt confident going into race day as I knew we were in the mix with the other drivers in contention for the Jack Sears Trophy and after race two,” reflected Osborne. “Things were looking good and there were only a few points between us at the front. The final race was disappointing as I think we could have had a really strong result there and maybe even taken the championship lead, but it wasn’t to be. I’ll come out fighting at Brands Hatch and see what happens.”