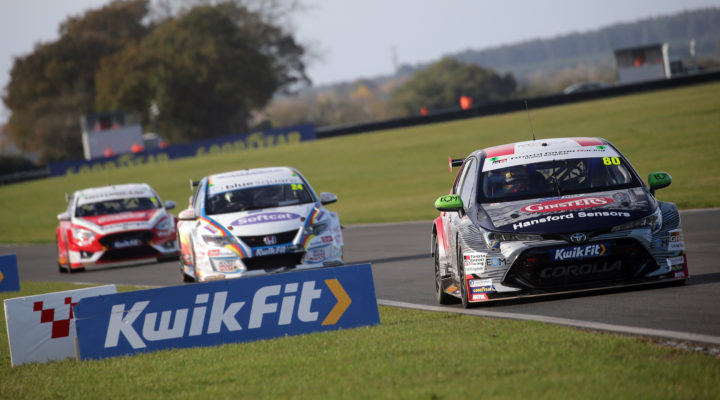 For the fourth time in as many years, Tom Ingram will go into the Kwik Fit British Touring Car Championship season finale with a shot at clinching the most coveted prize in national motorsport, after racing to a superb podium double at Snetterton last weekend (24/25 October).

Last year, the Norfolk circuit was the scene of the Toyota Corolla’s maiden pole position in the UK’s premier motor racing series and, despite carrying 42kg of success ballast, Ingram was again on the leading pace from the outset in 2020.

Qualifying in the fastest ten drivers during Saturday’s session, Ingram went on to contest the Snetterton Top Ten Showdown, where he duly qualified third, just two tenths-of-a-second shy of the top spot around a 2.97-mile lap.

On a track surface still damp from overnight rain, the Toyota Gazoo Racing UK with Ginsters star immediately went on the offensive in race one in front of the live ITV4 television cameras, grabbing second place away from the line before proceeding to attack Colin Turkington for the lead. After a bold attempt to go all the way around the outside of the Northern Irishman at Agostini failed to come off, Ingram found himself having to fend off the attentions of a ballast-free Jake Hill behind.

Contact at the Wilson hairpin midway through sent the Toyota into a half-spin, but the order remained unchanged and thereafter, the two-time BTCC Independents’ Champion steadied the gap as he posted his personal fastest laps of the race to close back in on Turkington and secure the runner-up spoils.

Race two was a similar story. Once again, Ingram initially threatened Turkington for the lead before switching his focus to protecting his position from a gaggle of lighter cars behind. With three of his four title rivals filling the Toyota’s mirrors, the pressure was intense, but even a hefty hit on the final lap could not unsettle the Bucks-born ace as his defensive masterclass yielded another second-place finish – his eighth podium of the season.

From ninth on the partially-reversed grid in race three, Ingram made up some early ground before pulling off an opportunistic pass on lap five to snatch three positions in one fell swoop and climb to fourth. From there, he went on a charge, unleashing a scintillating turn-of-speed and posting two consecutive fastest laps to slash a four-second deficit to the leading trio to next-to-nothing heading onto the final tour.

When Rory Butcher then ran wide at Coram, the 27-year-old spied his chance and darted up the inside to steal third, but moments later the Ford was sliding across the grass, tagging Ingram and dropping him to eighth at the chequered flag.

That misfortune meant that instead of leaving Snetterton with a hat-trick of rostrum finishes and only 23 points shy of the summit of the standings, Ingram will go into the Brands Hatch season finale in just over two weeks’ time 34 points away from the championship lead, while Toyota Gazoo Racing UK with Ginsters remain sixth in the Teams’ table.

“I can’t praise the team and Tom highly enough for the way everybody performed over the weekend – we came to Snetterton to put up a fight and that’s exactly what we did,” said Team Principal Christian Dick. “Right from the get-go, we were on really strong form. We started off in a good place with the Corolla and just tweaked and refined it as the weekend progressed – as was proved by Tom’s stellar pace in the final race.

“Obviously the loss of points in race three makes things that little bit tougher going to Brands Hatch, but anything can still happen, especially around the Indy circuit in November. It’s a track at which we’ve had a lot of success in the past and where we’ve won a lot of races. We have nothing to lose and will go there with the same fighting spirit we took to Snetterton – all we can do is go on the attack and then see where that leaves us at the end of the weekend.”

“Well, that was another rollercoaster weekend that epitomised the highs and lows of the BTCC,” reflected Ingram. “I was very happy with third in qualifying. We’ve not been to Snetterton when it’s been so cold before – the race meeting usually takes place in the middle of the summer – and the circuit felt totally different, but the whole team did a mega job to put us right up at the sharp end where we needed to be.

“Race three was such a frustrating way to finish the weekend, because we should have left Snetterton with three podiums and a reduced gap to the top of the championship, and as it was we ended up conceding ground. I’m gutted for everyone in the team, who all worked so hard to give me such a good car. We’ve had more than our fair share of bad luck this year, but now we need to go to Brands Hatch and sign off the season on a high. This isn’t over yet!”