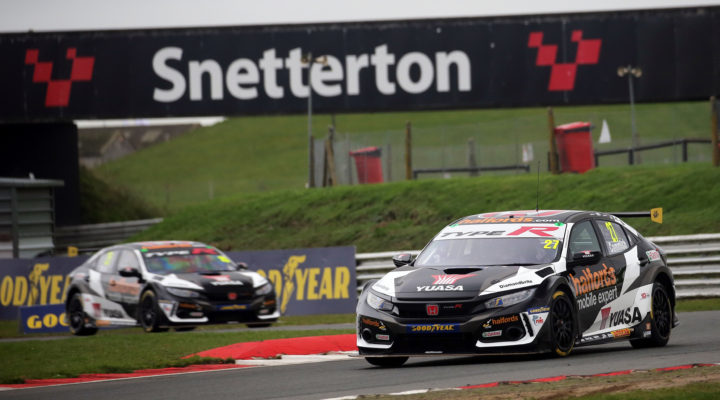 Halfords Yuasa Racing’s Dan Cammish will arrive at Brands Hatch next weekend (14/15 November) looking to stage an even bigger comeback than he did in 2019, when the Yorkshireman came so close to snatching the title.

“Last year I went to the Brands final 16 points back and came so close to taking the title,” said Cammish. “This year it’s a bigger points gap but I have to get stuck in and stay positive – it’s not over yet!”

That battle cry followed a tricky outing for the Honda manufacturer outfit at Snetterton last month where colder track temperatures, as well as the new ‘Top Ten Showdown’ qualifying format, provided challenges during the weekend.

Cammish qualified well to claim fifth on the grid and produced a decent points haul with a trio of top six finishes on race day, despite the Honda Civic Type R struggling to show outright race-winning pace around the Snetterton 300 layout.

Although the 31-year-old lost ground in the title race to rivals Colin Turkington and Ash Sutton ahead of him, Cammish was sure he had squeezed everything he could from the #27 machine.

“Usually when I go home if I’ve made errors then I’m feeling pretty down, but I don’t know what more I could have done all weekend,” he said.

“I could have done with a few more points but what we’ve got to do is come back fighting at Brands and have a good end to this championship.

“I’m happy to be where I am. We’ve had a sensible year, there’s been opportunities missed but there’s also been some good days.

“All we can do now is regroup and see if we can come out with something a little bit quicker at Brands.”

Three-time BTCC champion Matt Neal knows what it takes to win a title and the veteran racer will be doing all he can to help bring success to his team-mate and Honda, particularly with the Manufacturers’ and Teams’ honours also still up for grabs.

“The important thing to take away is that we are not out of it,” claimed Neal. “We go to Brands Hatch with Dan still in the title race and I will be doing everything I can to help win titles for him and Honda.”

Rounds 25, 26 and 27 of the Kwik Fit British Touring Car Championship will take place around the famous Brands Hatch Indy Circuit on 14/15 November.