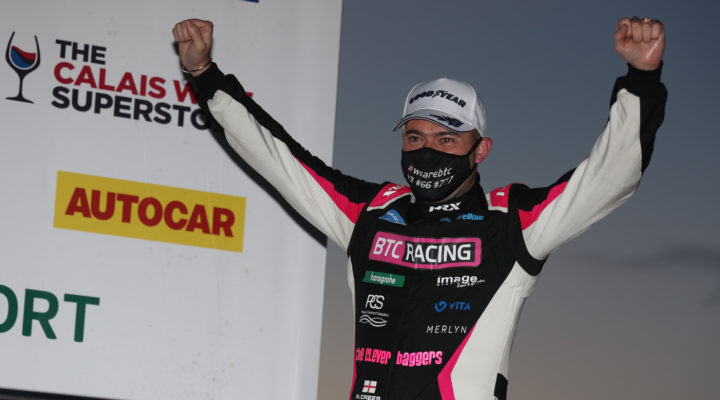 Critically for Crees, he also reclaimed the lead at the top of the JST standings, a position he had previously held for much of the season.

“I’m really happy with the way this weekend went,” confirmed Crees. “I just sort of cruised in the last race. Once I knew I was leading the championship again, I didn’t want to take any risks.

“I’m glad to be going into the final weekend 11-points clear. I knew we had the pace in the car all weekend, but we did struggle with the tyre temperature.

“It was great to finish all three races, take three Jack Sears wins and also score points in all three races in the main championship for the first-time. It’s a huge boost for the final round at Brands Hatch.”

Crees’ BTC Racing stablemates endured some challenges at Snetterton, with Tom Chilton failing to score for the first time this season owing largely to some engine issues, whilst Josh Cook grabbed two sevenths and an eighth-place finish around the three-mile circuit in Norfolk.

“It was a game of two halves as they say,” confirmed Joint Team Principal Bert Taylor. “The weekend started well in practice, slipped back in qualifying and we brought it back in the races, but we go home with mixed emotions again this weekend.

“I’m elated for Michael to be back at the top of Jack Sears Trophy. It’s like a seesaw of emotions. Creesy was on top of the world, but Tom had a rough weekend. To have engine issues again this weekend isn’t really good enough. We need to get to the bottom of it. It’s frustrating for Tom’s side of the garage.

“Taking the positives away, we got ourselves back from 12th on the grid with Josh and scored decent points in all three races and Creesy has come away with a good lead at the top of his class having scored maximum points.”

With the season finale approaching at the iconic Brands Hatch Indy circuit on 14/15 November, BTC Racing lies fifth in the overall Teams’ Championship, and third in the Independent Teams’ standings.

Chilton has dropped to ninth overall but retains his third-place spot in the Indy order, with Cook close behind in tenth and sixth respectively. Crees’ target of securing the Jack Sears Trophy for 2020 looks to be back on track, with an 11-point advantage over his closest rival.