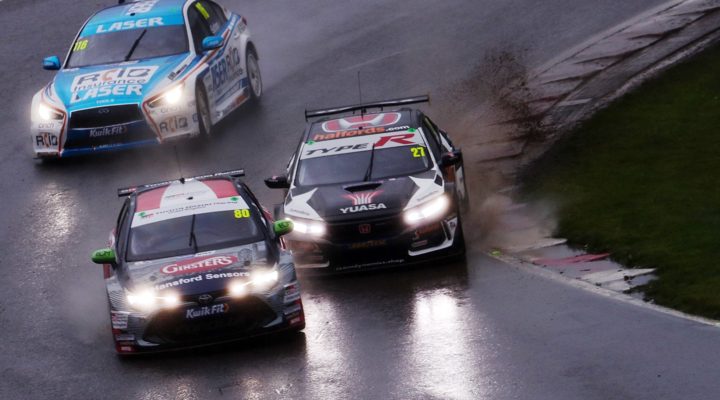 Halfords Yuasa Racing’s Dan Cammish produced one of the best performances of his BTCC career to claim victory in the opening race at Brands Hatch, whilst Laser Tools Racing’s Ash Sutton moved ahead of Team BMW’s Colin Turkington at the head of the overall standings.

Finals day kicked off amid awful conditions at the famous Kent venue as four of the five title contenders went wheel-to-wheel at the front of the field while reigning champion Turkington was forced to take a back seat in the opener.

Sutton’s Infiniti Q50 made the best getaway as he blasted by Rory Butcher’s Motorbase Performance Ford Focus off the line, slotting into second behind pole-sitter Tom Ingram, and Cammish was soon into third as he took the wider line through Paddock Hill Bend.

The contest was simmering in the early laps before the Honda of Sam Osborne and VW of Glynn Geddie had a coming together on the run up to Druids on lap seven, bringing about a brief safety car period.

The battle resumed following the restart and the moment of truth came on lap 13 as Cammish squeezed his Honda Civic Type R down the inside of Ingram’s Toyota Gazoo Racing UK with Ginsters’ Corolla as the pair climbed the hill towards Druids Hairpin. It was a tense moment as Cammish braked as late as he dared, just about stopping his #27 machine on the run through the slowest corner on the track.

It was a fantastic move and one that saw Cammish largely cruise away… that was until Sutton also took his opportunity to pass Ingram through Surtees. Sutton set the fastest lap as he closed in on Cammish but his challenge came too late.

As the chequered flag fell it was Sutton who has now taken a two point lead over Turkington, whilst Cammish is just 13 points in arrears with another pole position to come for the Honda star in race two. Ingram’s solid podium still saw him lose ground in the title fight with Butcher’s fourth place forcing him out of overall contention.

BTC Racing’s Josh Cook passed Turkington following the restart to take eighth, with the latter seemingly struggling for pace in the wet conditions. Turkington’s team-mate – Tom Oliphant – rounded out the top ten with the pair unable to extract any more pace from the BMW 3 Series.

All the drama is taking place live on ITV4 with the second race due to commence at 12:32, as the 2020 Kwik Fit British Touring Car Championship continues towards its climax later this afternoon.

Dan Cammish said: “It’s all about trying to score as many points as you can, and when you’ve got a car that’s clearly got the potential, you’ve got to use it. In touring cars, you get your moments and you have your days where you can take advantage and you’ve got to. I’ve been in many fights with Tom Ingram this year where he’s had a slight advantage, but this morning, we managed to reverse that. You’ve got to give as good as you get. I’m really pleased with the result, both for myself and for everybody at Team Dynamics. We were quick yesterday and we knew we had a good race car, so I’m really glad we put it to good use. First blood to me, but we’ve got to go back and see if we can improve again because everybody else will.

“After what happened last year, I think my outlook’s probably changed a little bit – you don’t get ahead of yourself until you’re on your way home, halfway up the motorway with the trophy in your hand! Anything can happen in this game and it usually does, as I proved last year! I’m just here to enjoy it. I think sometimes, I get a bit caught up with the pressure and the racing that I forget that I’m in a very privileged position to do what I do. I love what I do, and I hope the fans enjoyed it at home today. I can’t wait to see you all again next year!”

Ash Sutton said: “I felt like we had a very good car at the end of the race – it really came alive. Just before the safety car, it felt like, ‘hang on a minute, I’ve got a car underneath me here’ but then we had to start again and it wasn’t until the latter stages of the race that I had the pace to put a move on Tom [Ingram] and then try and hunt down Dan [Cammish]. The tyres just started to come in – they seemed to take a very long time, but I saw Tom was wounded to some extent and he was falling into my lap. I did play it safe, but if the move was 100 per cent on then I was doing it.”

Tom Ingram said: “The conditions were super tricky in race one, and it seemed like they were changing every lap – we even had another short downpour midway through! We were just struggling with the front tyres and I didn’t really have an answer for Dan [Cammish] or Ash [Sutton] towards the end, but it was pleasing to get a podium nonetheless.”