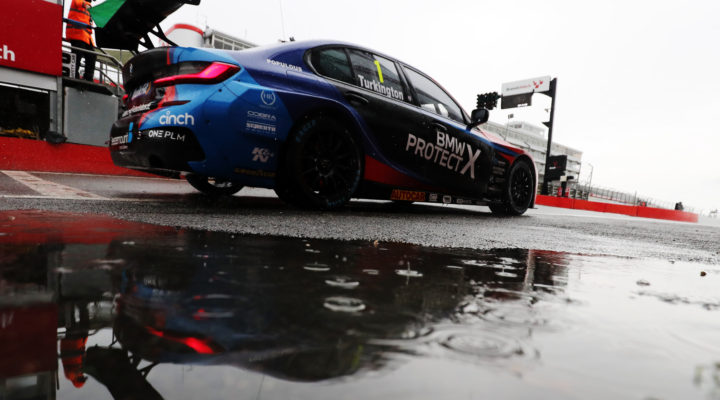 BMW swept aside the spray at a wet and windy Brands Hatch last weekend to secure a fifth consecutive Manufacturers’ title in the Kwik Fit British Touring Car Championship, as Team BMW similarly snared the Teams’ spoils at the end of another hugely successful campaign.

For the sixth time in his stellar career in the country’s premier motor racing series, Colin Turkington finished inside the top two in the Drivers’ standings, tallying a season-high 13 podium finishes – including five commanding victories behind the wheel of his BMW 330i M Sport.

The changeable conditions unfortunately conspired against the Northern Irishman at Brands Hatch, although as the track dried in race two, he demonstrated his BMW’s dry weather pace by scything through the pack from ninth to fourth, seeing him enter the final round of the campaign still in the hunt for the biggest prize in UK motorsport.

A battling performance that yielded ninth place at the chequered flag was ultimately not quite enough but nonetheless sealed second position in the Drivers’ classification, with team-mate Tom Oliphant concluding an excellent sophomore season with Team BMW in sixth.

Contesting only his third campaign in the BTCC, the 30-year-old similarly struggled to find grip around Brands Hatch’s short Indy circuit, posting a top ten finish in race one before fighting his way back into the points in race two after being spun down the order by a rival. That did not, however, take the sheen off a strong season, with his maiden race win and three further rostrum results firing Oliphant five places further up the Drivers’ table than in 2019.

The pair’s combined performances were sufficient to cement BMW’s seventh BTCC Manufacturers’ crown, as Team BMW successfully recaptured the Teams’ title. The hard work now begins in earnest ahead of the resumption of racing next April, when the 2021 season fires into life – back at Brands Hatch Indy – on 3/4 April.

“It’s been another great season for Team BMW, and it’s nice to come away with two pieces of silverware in the shape of the Manufacturers’ and Teams’ Championship trophies,” said BMW UK CEO, Graeme Grieve. “For us as a brand, the Manufacturers’ is the big one, and to secure it for the fifth year in a row is a quite remarkable achievement for which everybody involved should be congratulated.

“Obviously it was a great shame for Colin to miss out on the Drivers’ title – that would have been the icing on the cake – but Ash [Sutton] is a very deserving winner. The BTCC is such a competitive series in which the level seems to go up each year and the margins are always so small. Both Colin and Tom have driven brilliantly all season, and we go away happy and very much looking forward to 2021.”

“To win five consecutive Manufacturers’ titles in the BTCC is testament to a tremendous team effort from all the guys and girls here at WSR,” reflected Team Principal Dick Bennetts. “It’s an incredible achievement. This is always a hard championship, and starting in August and finishing in mid-November made it even tougher this year, but Colin did a brilliant job once again to finish second in the Drivers’ Championship and win the first Goodyear Wingfoot Award for qualifying, while Tom had a very positive season and took a real step forward.

“Reliability has been first-rate and we’ve got a fantastic car in the dry. The weather clearly didn’t help us at Brands, but the conditions were the same for everybody and we’ll make sure we go away and do some more homework on our wet set-up over the winter to come back even stronger in 2021.”

“It’s been a very positive season overall, and it’s great for all of us to win the Manufacturers’ and Teams’ championships, both of which are clearly very important titles,” added Turkington. “I gave it my very best shot at defending my Drivers’ championship, but there’s absolutely nothing to be ashamed of finishing second in a series as competitive as the BTCC – it genuinely is one of the toughest championships in the world to win, and it ultimately wasn’t quite to be for me this year.

“I tried to be as consistent as I could and we came very close, but the low-grip conditions didn’t favour us at Brands. We showed the pace we had in the dry over the second half of race two, and at the end of the day, we can hold our heads high. We’ve had some great results this season and the Team BMW guys have done a fantastic job to provide me with a great car throughout. Everybody gave 100 per cent in the pursuit of victory, and they should all be very proud of what we have achieved.”

“This has been my best BTCC season to-date, and I’ve got to be happy to finish sixth overall against a whole host of more experienced drivers,” proclaimed Oliphant. “It was a bit of a shame that we dropped off towards the end – in the last couple of race meetings, we didn’t really have any luck – but I’ve shown my speed and my overtaking abilities and I’ve always raced fair. I’ve had some good battles along the way, learnt a lot and scored some great results, and the guys on my side of the garage have worked tirelessly to get the car where I want it.

“A big thank you to BMW and WSR – they’re a great bunch of guys and girls and just phenomenal to work with, and they’ve done a cracking job. I’m really proud to race for such an iconic brand, and hopefully I’ll be back here again next year.”